Jean-Pierre, our French exchange student, left on Wednesday morning after spending a week with us and, I have to say, I miss him a little.

It doesn’t seem that long ago that we were waiting at the local girls’ High School for their bus to arrive. There were many parents like us, a little on edge and wary, accompanied by fidgety, gauche teens. When the French contingent shuffled into the dining hall and lined up with their cases, I thought I’d spotted ours. I was about to scoop him up and bundle him into the car when Rory pointed out that I had picked the wrong one: ours had grown his hair since his photo had been taken. Once JP had been located, embarrassed smiles, enthusiastic nods and clunky ‘Je m’appelle’s were exchanged and so our week began.

The schools had done very well in matching the children up. We were given a French Rory: a year older than ours but similar hair, body shape and an uncanny aptitude for sitting with a laptop on his knee. He also loved to sleep late at weekends. And this French model did come with some nifty upgrades: it didn’t leave its crusts and it carried its empty plate to the dishwasher.

JP ate everything I put in front of him, apart from broccoli, for which he can be forgiven. He ate beef stew, Thai chicken, chilli con carne, roast pork and Lincolnshire sausages. His Tupperware box for his packed lunch came home empty every day (unless he’d tipped it all into a nearby bin) and he enthused about its contents. He was so overwhelmed by his breakfast on Saturday morning – a bacon omelette, toast and baked beans – that he took a photo of it to show his family.

His English was excellent; honed, he told me, from years of reading English comics which had given him a natural confidence with conversation. Unlike the Burgess household who really did struggle to speak any meaningful French at all. I remembered the word for slippers, ‘les pantoufles’, but had no recourse to use it during the week. Thankfully I remembered the words for ‘clothes’ and ‘wash’ as JP didn’t seem to have brought enough socks and pants with him.

This was JP’s first time out of France, his first time in an aeroplane. He was so excited by everything. He came back from his trips to Cambridge and London in awe of what he had seen. We sat beside him as he clicked through all the photos on his camera and enthused as he showed us the souvenir he had bought: a Homer Simpson T-shirt. I slipped him an extra tenner for his London trip and he came back with….another T-shirt.

I needn’t have worried about how to entertain him at the weekend. A group of French and English kids had decided to go to the cinema to see Mission Impossible 3. This worked well until they missed the bus home just as a snow blizzard hit our part of the country. Some terse text exchanges were made between me and my original son as to the value of checking timetables. They sat in Sainsbury’s cafe for a while, caught the next bus and Dougie was dispatched to pick them up from the bus-stop. On the Sunday the snow was so deep that all French and English teens within a five-mile radius descended on us. They had a fantastic time playing basketball, table tennis and table football, made a huge snowman and created the following artwork in the back garden to prove that boys will be boys no matter what their nationality : 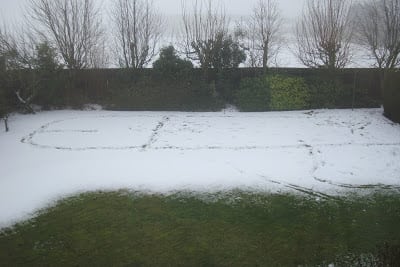 Were there are any mishaps? Only one and, thankfully it didn’t involved Jean-Pierre. On their final day, when the French students were returning from London in the early evening, six of them forgot to get off at Peterborough for their connection and tootled on up to Newark before returning. I bet there were a few choice words in both languages from the teachers waiting on the platform.

Rory is now looking forward to the return visit to the South of France in March. Apparently Jean-Pierre has a 15 year old sister.