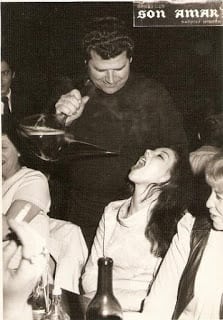 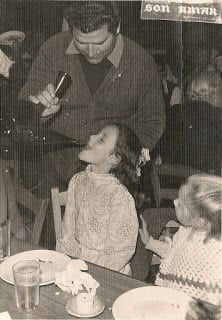 Some of you may have seen the picture on the left before. It was featured in an article in Prima magazine about Mediterranean holidays of my childhood. I wrote about it in a post about a year ago. Here I am, aged 8, being plied with wine on a family holiday to Majorca in December 1972. A happy holiday; we took my grandparents with us that time and Grandma showed us up by trying to smuggle a bottle of Advocaat in her suitcase, wrapped up in a pair of huge knickers, all because she fancied having a snowball at Christmas.So what about the photo on the right? Well, this was sent to me by a lovely lady, Marion, who now lives in Panama. Marion has been reading my blog for a few months now and she got in touch some weeks ago to ask where I had bought the anorak I was wearing in my Iceland photos. We have continued to keep in touch. This is what she said in the email:

“After enjoying several am-dram/country specific articles from Mum’s Gone To …… I click on one called Prima. Whooooah, wait a minute, I know that chap in the photo – what does that sign say, Son Amar – I’ve been there, done that. Off I go to root through an album of old, old photos and lo and behold there it was. Can you believe this, the same chappie. Only difference in the photos is the age of the recipients of the wine from El Porron. Even the neckline of the dresses are somewhat similar. My photo was taken around 1973 and I’m at least 18 years older than you (think I was around 23 or 24 at the time). But even at your young age you are much more controlled than I appear to be – I doubt if I could possibly have opened my mouth wider, I look as if I am making an attempt at an impression of the entrance to the Queensway Tunnel. Obviously I was a trainee lush in my younger days even before the trials and tribulations of this world wore me to a nubbin of my former self…..

Can you believe it? Sitting at virtually the same table in a huge restaurant, the sort where the tour companies organise bus trips to, probably only a few months apart, being served by the same chap (minus his cardi in Marion’s photo as it was probably the summer then), both of us happily knocking back the wine. Forty years later the beautiful woman in the second photo comes across the young girl from the first photo and that one moment is re-lived.

As Marion said for both of us, “My flabber was well and truly gasted”.

Note (added 5 July 2.30pm) – Have since worked out that we must have gone on this holiday in December 1972, not 1971, so have adjusted the post accordingly. Mum was reminding me today that my brother and I, nicely oiled with Spanish plonk and always happy to take centre stage, entertained everyone on the bus on the way back to the hotel, with a version of Chuck Berry’s ‘My Ding-a-Ling’. As this was a UK hit in November 1972, the date of our holiday could be settled once and for all.