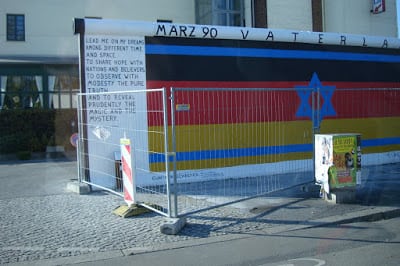 The Berlin Wall, constructed by the German Democratic Republic in 1961, divided East and West Berlin until it was pulled down in 1989 as Communism collapsed and the Cold War ended . 96 miles of wall, 12 ft high, constructed of reinforced concrete blocks, with barbed wire, guard towers and a “death strip” between the two parts of the city where upwards of 100 people died trying to cross from East to West.

We visited Berlin last October, just before the 20th anniversary of its demolition. There isn’t much left of the wall to see but a mile-long stretch of it near the Ostbahnhof was saved in 1989 and 110 artists from 44 countries were invited to create the world’s longest open air gallery. The Western side of the wall had been painted with graffiti and murals for years, but this Eastern side had remained untouched.

The photo above shows a section of the wall painted by Gunter Schaefer who had grown up in West Germany. Named “Fatherland” it combines the German and Israeli flags and refers to two November 9ths: in 1938 when the Nazis attacked German synagogues and arrested 25,000 Jews and the day in 1989 when the wall came down.

Shaefer and the original artists were asked to return to Berlin in 2008 to restore the paintings to their former glory because vandalism, souvenir hunters and erosion had damaged them over the years. The wall here will now be protected by 24 hour security. That’s irony for you.

The wall today is not ugly to look at, with its bright, vivid murals, but it represents a bleak period in Germany’s history so I felt it was a suitable photo for the theme of Ugly in The Gallery this week.