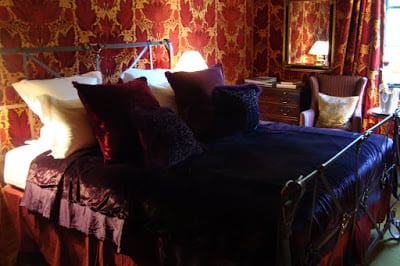 The second thing that went through my head when I saw this fabulous bed was “Ravish me…NOW!”

The first thing that went through my head, however, was “Where’s my camera? I must take a photo of this before we mess it all up”.

This gorgeous boudoir belongs to the Prestonfield House hotel in Edinburgh. Dougie and I were attending a charity gala evening there last October to raise funds for his old school, George Heriot’s. We could have done with passing the hat round ourselves as this weekend away wasn’t cheap. Once we’d paid for the tickets, the hotel room and the petrol to take us from Lincolnshire to Scotland, this was going to be hellish expensive for one night of decadent jiggy-jiggy.

Picture the scene if you will. We were shown into this beautiful room, there was champagne on ice waiting for us, we were child-free and we had about an hour before we needed to get changed. Well….you would wouldn’t you?

The overnight bags were dropped on the floor and we both jumped into the pile of velvet loveliness. Dougie looked into my eyes and said,

“AAAAATCHOOOOOOO!”   as a cloud of dust and fluff filled his nostrils and set off an allergic reaction.

Bloody great! I lay there waiting for Godot for a considerable time whilst he knocked back the antihistamines… but to no avail. He sneezed and snottered so much that I got up, poured myself a big glass of champers and tucked into the complimentary chocolates. My ardour well and truly cooled, I ran myself a soothing bath and filled my toiletry bag with shampoo, body lotion, shoe shine and sewing kit to compensate.

As the sneezing continued and then developed into a full-blown nose bleed, I could hear the pipes in the distance calling us to dinner. We had ten minutes to get dressed which isn’t long when you have a man who has to get into the full highland regalia and is bleeding profusely.

We just about made it in time. With a sporran full of tissues and pills, we hot-footed out the door and joined the other guests.

The evening was fabulous and we managed not to get carried away with the auction (I was under strict instructions to keep my arms firmly by my side).

This meme was passed to me by lovely Vegemitevix. The idea is to open the first folder in your Picture file and find the 10th photo in that folder which should form the basis for the post. I should really tag other people to carry on this meme but each time I think of someone, they have already been tagged. So feel free anyone who is inspired, and has a computer full of old photos – give it a go!