Planning for our Easter break to Scotland shortly and it dawned on me that the country has always been present in my life in one way or another but that the trips I’ve had there all seem to have mulched into one in my mind. I sat with the boys last night and asked them about previous trips we’d had to Dougie’s birthplace and, whereas my memory for dates and occasions was very woolly, my husband and son were particularly good at remembering things pre-blog, often based on whether there was a World or European Cup that year.

Based on our recollections I have managed to assemble a collection of memories, which may or may not be in chronological order: 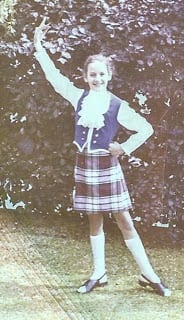 I’ve obviously always had a bit of a penchant for all things Scottish which led me to marrying one later on in life. In the 1970s I began to learn Highland Dancing and entered competitions, a couple of them being over the border from my home in Newcastle. Did you know I was the North of England Beginner’s Champion in 1974, aged 10? Heady stuff, indeed. As this became a serious hobby, it necessitated a trip to Edinburgh to be measured for a velvet waistcoat and kilt. These were expensive items and it was a long trip. I continued dancing for a few years until my kilt became too short and I had to decide whether to get a whole new outfit or give it up and enjoy being a teenager in other ways. I packed the kilt away.

I met Dougie in 1987. In 1988, while I was still working in London, he continued his medical training in Elgin in the far north east of Scotland. Most of the time I would meet him for a weekend in Newcastle, both of us travelling a few hours to ‘meet in the middle’. I did fly to Aberdeen once to visit him and he was extremely late picking me up from the airport as he’d crashed into the gate-post when leaving the house. He’s never been much good at reversing.

Pre-Rory, I remember frequent visits to Edinburgh to visit Dougie’s parents who still  lived there before retiring down to Lincolnshire in 1995 to live near us. Many a day was spent walking up the Royal Mile or climbing Arthur’s Seat in a scene reminiscent of the book/film One Day. 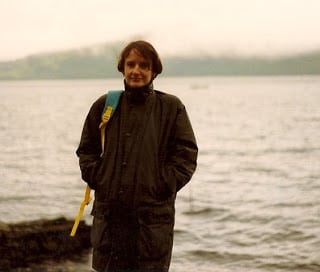 A dreek holiday travelling round the west of Scotland brought us to Plockton where the haggis they served as a starter was so tasty it’s stayed with me to this day. I think we saw the Isle of Skye but the weather was so dreadful most things were covered in a low mist (just look at that face in the picture).
On other trips we visited Fort William, Loch Ness, Glengarry Castle and the Queen’s residence, Balmoral.

Post-Rory, a trip to Loch Rannoch in 1997 saw us staying in an apartment which looked rather lovely but was covered in dog hair. I remember Dougie spent two hours hoovering the place before we unpacked. No idea why we didn’t make a fuss and get someone else to do it. He was a man on a mission, best left to his task. During this trip we visited places which suit toddlers: highland parks with coos and deer and anywhere we could push a toddler in a buggy and point at things. It rained a lot (again) and I remember we found a soft play centre on a housing estate to escape to. 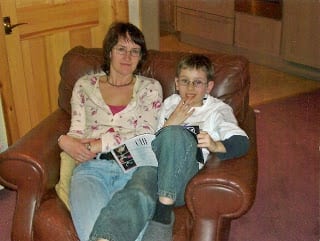 2005, Loch Lomond. Another attractive apartment let down by a musty smell on the ground floor. Visited an old prison in Inveraray, saw a salmon ladder in Pitlochry and took a trip to Glasgow for a tour of Hampden football club. Whilst at the Science Centre in Glasgow we ended up being involved in a press conference to publicise the baton relay for the following year’s Commonwealth Games in Melbourne. Rory held the baton and was given a T-shirt. I have no idea why this was happening in Glasgow but maybe it was en-route from Manchester where the games had been previously hosted.

Popped up to Edinburgh to visit Dougie’s Auntie Jenny and see the West End touring version of Starlight Express. We saw the Saturday matinee performance which had someone signing for the deaf at the side of the stage. I am now unable to sing the words ‘starlight express’ without moving my right arm in a big arc above my head, followed by a couple of choo-choo movements with my arms.
Amused by signs on the roads in the small towns to restrict speed – “Twenty’s Plenty” – and interesting to note that the signs on the motorways said. ‘Don’t take drugs and drive’ whereas the focus in England is more on drink. 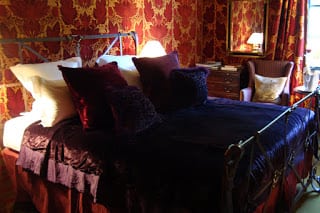 2009, a school reunion for Dougie involved a gala dinner at Prestonfield House. We stayed the night at the sumptuous Edinburgh hotel but, fancying a bit of pre-dinner fun, jumped onto the bed and the resulting fluff, which was dislodged from the velvet cushions, set Dougie off sneezing to the point that his nose bled and our ardours were well and truly cooled.

I wonder what’s in store for our trip to Loch Tay in just over a week’s time? Looks like we might not have rain this time…..I think snow is forecast.