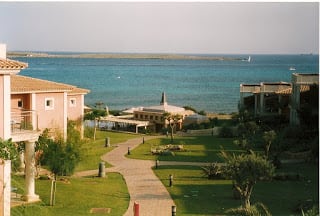 2004 was an Olympic year. In Athens, finely sculpted
bodies were pushing themselves to the limit to be ‘faster, higher, stronger’
while on the Mediterranean island of Menorca my body, seemingly sculpted with a
blunt shovel, lay on a sun lounger, just about managing to turn over the pages
of a book and stretch out for the brightly-coloured cocktail beside me.
Like most people in the hotel complex in Punta
Prima, I had been making the most of the all-you-can-eat buffet at breakfast and
dinner, often getting a little peckish at lunchtime too. After a few days of
ensuring I was getting my money’s worth, I realised something had to
give…before the sun lounger did. 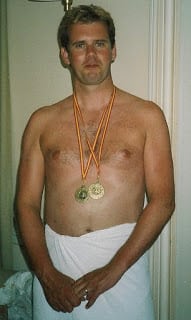 Both my husband, Dougie, and eight year old son,
Rory, were putting me to shame on the exercise front. Dougie was making a
decent stab at becoming an Olympian, joining all the other competitive dads in
the organised sporting events at this cosmopolitan resort. Huge national
fervour took hold and communication barriers were overcome using the common
language of shrugged shoulders, plenty of shouting and the constant peep from
the referee’s whistle. The Italian men encouraged my Scottish husband to join
them in the fiercely-contested volleyball and basketball tournaments. The
Italy/Scotland team triumphed and Dougie, the big kid that he is, raced up to the stage that
night to collect his medals. 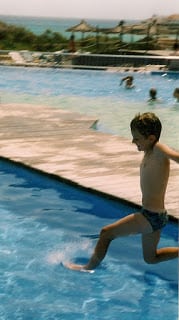 Rory was just as active, spending a couple of hours
each day in the Kids’ Club. We would watch him walk by
in his yellow baseball cap, on a scavenger hunt or en route to the
football pitch with his little friends. He would then spend the afternoon with us: leaping in and out
of the pool, badgering his dad to throw the splash ball to him and clambering on
and off his inflatable shark.
Did the spirit of the Olympics encourage me to
partake in some exercise? It was Pedro, the archery instructor, whose torch eventually
lit my fire. I had seen the tousled mop of dark hair belonging to this Spanish
god and noticed he ran a class each day. I thought archery might suit me: not
too exhausting, unlikely to make me perspire in an unattractive manner and
pleasingly situated far away from the volleyball court.
As Pedro stood very close behind me, placing his arm
on my arm, he helped to pull the arrow close to my cheek and whispered
instructions into my ear:
“You need to have a firm grip, Senora…..now gently
ease it back….steady…steady….now release”.
The arrow sliced through the air and landed, ‘thwack’,
straight into the central gold section of the target.
“I think maybe you have done this before?” he
enquired with the hint of a smile.
“Oh no,” I replied, breathless. “This is my first
time.”
“I think Senora is a natural.”
“Do you? How marvellous! In that case, may I ask you one
thing?”
“Si Senora.”
“Do I get a medal?”
…………………………………………………………………………………
This is an entry for the Tots 100 travel-writing competition in association with Thomson Al Fresco. Al Fresco has 54 holiday parcs across Europe, each offering plenty of fun activities for families (including archery!).
If you would like to enter the competition, you can find details on the Tots 100 blog.