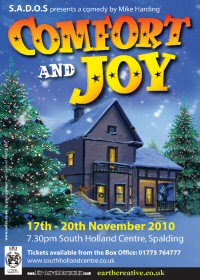 A foggy night in Spalding; miserable, dank and gloomy. What better way to lift the spirits than a trip to the theatre for a night of pre-Christmas laughs with Mike Harding’s sparkling comedy, Comfort and Joy.

Spalding Amateur Dramatic and Operatic Society has been performing all week to large, enthusiastic audiences at the South Holland Centre, Spalding; the down-to-earth humour and festive theme of the play has been a big draw.

Written in 1997, Lancashire born Harding’s play centres on the character of Goff, a curmudgeonly character in his 70s, played quite brilliantly by the larger-than-life Jon Molson. He ensnares the audience from the off, sitting in his armchair like Jim Royle, dressed in a Santa suit and moaning at the pitiful efforts from a series of visiting carol singers.

He is ably supported by some strong, female characters: Margaret (Jane Moss) and her teacher daughter, Helen, (Amanda Whiting) who both display great dry wit and bring vitality and warmth to the proceedings. Margaret’s loveable but hapless husband, Martin, dragging in his knock-off Christmas tree and making frequent trips to the drinks cabinet, is played with excellent comic timing by Brett Moore.

As the play moves from Christmas Eve through to Christmas Day, Goff is reunited with his daughter Fiona (Laura Coates), returning for the first time since her emigration to Australia with Jimmy (Martin Tyrell). The weirdest neighbours imaginable pop in for a drink: Zack Colam and Gemma Cunningham playing the completely bonkers couple which shifts the humour up a gear.

It isn’t until the second act that we are introduced to Margaret and Martin’s daughter, Kathy (Beverley Moore) and her arty boyfriend, Crispin (Simon Temple). These two characters burst onto the stage with fabulous energy. Kathy prances around, fretting about her two cats who have spent the whole car journey peppering ‘doo-doo’ all over poor be-suited Crispin, who then spends the remainder of the day dressed in Martin’s ill-fitting trousers, trying to smile graciously upon receiving ties from every member of the family as a Christmas gift.

My favourite scene has the whole family, replete from a turkey dinner and too much home-made hooch, playing charades. All the actors play their part in making this a cracking bit of theatre but hats off to Simon Temple whose demented chicken dance, a cross between John Cleese and Norman Collier, will remain in my mind for some considerable time.

SADOS can always be relied upon to deliver the goods when they perform a comedy: this script from Mike Harding was just the vehicle they needed to show their skills. A joyous play, full of banter, just the right amount of slapstick and a cast of strong characters made this a very entertaining night out. Well done to director, Brett Moore, producer and co-director, Elaine Deathridge, and everyone else behind the scenes, for bringing this production to life.

The final performance is this evening, 7.30pm. If you want to get into the Christmas spirit then I recommend you hot-foot it to the South Holland Centre.

Oh and I’d pass on the Twiglets if I were you….