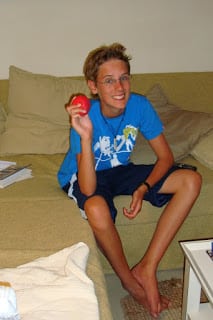 The thing about self-catering apartments is that because you have the facility to fend for yourself, there is an urge to do just that. Despite the fact that the hotel has a lovely restaurant a few metres away, a sort of camping mentality sets in. Well, if I’m honest, it does with my husband. Never a morning person at home, Dougie is up with the larks to do a supermarket run before it gets too hot. These jaunts into town are nothing if not eventful. On the first day he walks for 15 minutes to the Migross supermarket (nice name!) but gets there before it opens so decides to walk another mile to the next one, Lidl, only to find it opens even later, so is forced to return to the first one, by which time he is sweating and swearing profusely. Another day he gets stuck in a lift (yes, how odd, a lift in a supermarket) and spends 15 minutes going up and down without the doors opening. A third time, already tired after a walk to the neighbouring town of Garda, he decides we need more wine and dithers in three different shops before getting caught in a thunderstorm on the way back (the wine was lovely though). Oh and how can I forget the rigmarole of buying suncream. We ran out of Ambre Solaire in the second week and its replacement was a weird orange bottle of lard we were stuck with for the remainder of the holiday.
Our son Rory is quite delighted that he can have a lie-in every morning – no breakfast times to adhere to and no maid service to shame him into getting out of his pit. We usually peel him off the mattress sometime around 11, and dear old dad rustles up something from his morning catch. Mind you, it’s an effort to cook in these tiny kitchens. For a start the cupboards are already full with the most bizarre cooking utensils so there is no room to actually put the groceries. In order to find room for the crisps and cereal I have to clear out a selection of varying-sized salad bowls, two different coffee machines, microwave bowls with lids and two huge saucepans which would be useful if we were cooking pasta for the neighbours too. An extremely inefficient toaster (called Super Douglas….I did laugh), no draining board, no washing up liquid, no dishcloths but 6 of every sized glass (of course you always hanker after a glass of sherry on your hols). With all this, Dougie manages to cook a very nice omelette. 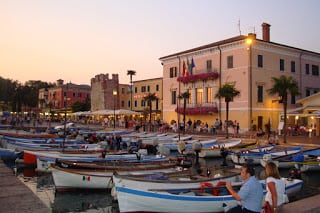 The routine of the rest of the day usually involvs lolling by the pool. They have two: a noisy one for kids and a “quiet” lagoon-style pool for adults and languid teenagers. They are rather strict about the dos and don’ts at the latter: no excess noise, no ball-games, no inflatables. Most of the guests are Dutch, Italian or German with a few Brits. Very entertaining watching families of all the nationalities flouting the rules. Middle-aged dads in particular floating on lilos only to be caught by the manager coming by and wagging his finger at the offending article. Dad sheepishly swims to the side and hides his inflatable (!) and as soon as the boss-man has gone, all the parents leap into the pool with balls and frisbees, teenage children despairing of their parents’ pathetic gung-ho fight against authority.
The temperature is over 30 degrees every day and this soon puts paid to all the ideas I have about sight-seeing. It is an effort to turn the page of my bonk-buster paperback never mind get a bus to Verona to see Juliet’s balcony: I could sit on my own balcony and watch my very own Romeo hoofing it up the path, not saying “What light through yonder window breaks? It is the East and Juliet is the sun” but more usually, “Open the door you lazy tart, I’ve got three bottles of fanta and a six-pack in this bag and I’m knackered”.
August 2009