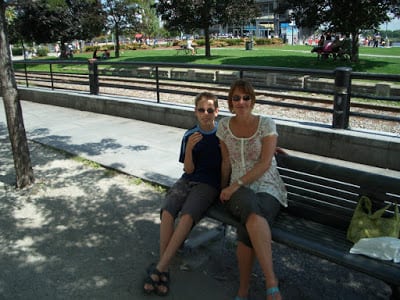 Chilling out in Old Montreal
At this stage of the holiday we’re all getting a bit tetchy with each other – not quite sure what to do today, getting tired, running out of clean clothes, T-shirts and pants hanging from every available hook in the bathroom. Rory in particular is having Le Strop today and as we walk to the Fine Arts Museum he drags his heels like most boys would do at the thought of having to go to the Yves Saint Laurent special exhibition. So I whizz round it at double-quick speed and the boys sit outside huffing.
We then make the inspired decision to ignore the museums for the rest of the day and that lifts everyone’s mood. We sit in McGill University’s gardens just enjoying the sun, mooch about the old town eating ice-creams and return early to the hotel by mid-afternoon. Though Hubby feels this is a bit of a waste of a day, I tell him if we were at home we would quite happily spend afternoons doing nothing. So he sits on the bed with Rory watching the TV while I pop down to the Starbucks in reception to buy cookies and Danish Pastries.
For the third night running we decide to eat in the hotel’s restaurant. I know it seems lazy as there must be hundreds of different places to try but after the first night we loved it so much we had to come back. The main reason, apart from the fantastic food, is the waiter. He is a lovely Italian chap called Ezio: probably in his 60s, looks a bit like Des Lynam. From that first night he worked his Italian charm on us and we were smitten. Tonight is no exception. He asks us how the Rod Stewart concert went, makes a big fuss of Rory, and tells us that every dish we choose is “an excellent choice!”. I choose a bottle of Italian wine which Ezio obviously approves of and we get steadily sloshed as the evening progresses. Rory finishes his meal early and takes the key so he can go to the room and watch the telly, so we decide to order another bottle of wine. There aren’t many in the restaurant tonight apart from a couple who are the spitting image of Mr Dudley and Ting-Tong on one table and a love-sick couple on another who keep pawing at each other until he brings out a jewellery box and proposes to her! I think she must say yes as the pawing continues for a good while longer until they thankfully get a room!
As our vision deteriorates we are entertained by a violinist, accompanied by his strange wife on the piano. It’s okay when he’s by the piano doing a passable “Volare” but then he starts working the tables, just like you see on comedy sketch shows. Dougie reckons he could be thyrotoxic as his eyes seem to be bulging in a rather off-putting way. The eyes, together with the demonic grin as he plays just a little too close to us, make him look quite alarming. Dougie feels very awkward, smiles a bit and then looks down at his food. I meanwhile, completely out of my tree at this point, start to join in as he Begins the Beguine. I get a kick from Hubby under the table and then of course the giggles start and we have to try really hard to suppress them and just hope he goes away and bothers Mr Dudley…which he does.
We polish off the second bottle of wine, say our goodbyes to the lovely Des Lynam and stagger up the stairs. We knock on the door and Rory lets us in, tutting at his drunken parents and wondering where on earth we’ve been, do we know what time it is and have we been drinking?!
August 2008