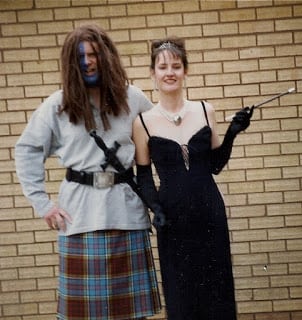 Who would have thought it: William Wallace and Audrey Hepburn? An unlikely pairing, indeed, but they look very cosy at a party in Lincolnshire in 2004 (or it could be 2003: I have no idea whether the divider I’ve placed in the box of photos dates the wodge of pics behind or in front).

Steve at Bloggertropolis wrote yesterday about William Wallace and how he has the audacity to steal his Christmas presents. To be fair, it seems to be a warehouse in Fife that’s to blame for the delayed parcels, but Steve’s crazy, brilliant thought processes have dragged Braveheart into the equation.

When commenting on the post, I mentioned that Dougie had dressed up as William Wallace for a fancy dress party some years ago and declared that my husband did indeed wave his claymore around wilfully while shouting “Freedom” at the top of his voice. I’m not sure it went down well in the quiet cul-de-sac on the new estate in Spalding, and I recall much drunken curiosity from Marilyn Munroe and Dolly Parton who were keen to see underneath the kilt.

I have no idea why I accompanied my bare-arsed scary husband to the party dressed as Audrey Hepburn but I suspect it was to save money on hiring a costume, plus the fact that I love the film Breakfast at Tiffany’s and would quite fancy singing Moon River strumming a guitar on a fire escape.

I digress. There is a reason for this post. Dougie and I have been invited to a New Year’s Eve party and it’s dressy-up again (six years after the last one: wow we’re party animals). The theme is ‘Assassins’. I need your help, blog readers, for some suggestions here. I’m thinking Mr & Mrs Smith as a possibility but there’s a distinct chance every other bugger will pretend to be Angelina with a gun strapped to her thigh. So who else can we go as? A James Bond couple? Odd Job? Pussy Galore?

Let me know your thoughts and I promise to provide photo evidence in the New Year.