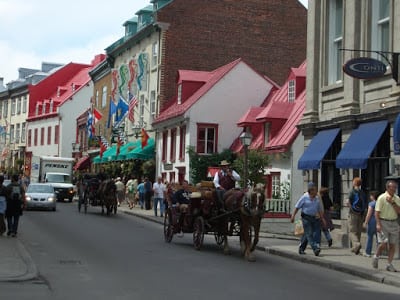 Beautiful Quebec City:
Another lovely day in Quebec where we go some way to discovering why the city and the state itself have remained so staunchly French. We visit the Quebec Experience which is a 3D sound and visual thing: a great way to learn about the history whilst being entertained by water, cannons and rifles coming out of the walls. No wonder the French here are not as friendly to the English as they are in the state of Ontario. When we hear about the battle on the Plains of Abraham and how the British took over the city it’s a wonder we weren’t garotted as we entered the city walls. They aren’t rude to us as such but certainly there isn’t quite the same warmth as we have experienced elsewhere. And the waiters definitely don’t regale us with stories of their Great Aunt from Inverness!
Mind you I think we must be the only Brits in the city as I don’t hear another British accent in the three days we stay here.That reminds me: we saw a great road sign coming into Quebec the other day. A blue sign with a single white question mark and the distance, 1km or 200m etc. We kept seeing it but had no idea what it meant. It was as if this French lot were saying,
“There is something of interest in a kilometre but, huh, we don’t want to tell you what it is: go have a look and find out for yourself”.
It took some time before we realised it was the sign for tourist information. Thanks for telling us tourists that’s what it meant!
August 2008