I do love a good art gallery, me. Over the years we have dragged Rory round numerous exhibitions and we’ve usually found something of interest for his age at the time. His favourite was the Musee D’Orsay in Paris where he saw Whistler’s Mother. This painting is at the heart of the Bean movie with Rowan Atkinson: Rory was delighted it hadn’t succumbed to paint stripper and chewing gum after all.

My award for ‘Best Gallery for Chumps’ is the Louvre for its exceptional way of helping idiots like me find the main attraction. No matter that there are hundreds of famous paintings in the building, most of us want to see the Mona Lisa before we give the rest a cursory glance. So they print off copious pieces of paper with an image of the Mona Lisa and a big arrow underneath then plaster them all over the gallery, pointing the way to Leonardo’s smirking muse. Ah it’s such a classy way of doing things but much appreciated.

Our hotel in Madrid is situated right in the middle of what’s termed the Museum Triangle. A little like the Bermuda Triangle, visitors may well drown in a sea of culture, never to be seen again as their voices can be heard calling like a distant siren “But I thought the Guernica was this way…’ 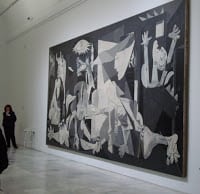 Picasso’s Guernica is the big draw of the ultra modern Reina Sofia gallery: a huge hulk of a building, with much light, many empty rooms and not enough useful signage. We spent far too much time hunting down the elusive painting and when we eventually found it there was a ridiculous bun fight for photographs. I don’t know why galleries don’t just ban cameras altogether: in some rooms here you can take snaps, some you can’t. With the Guernica you aren’t allowed to photograph the painting in the room itself, but if you stand in the doorway to the next room, you have permission to click away to your heart’s content. I did so and managed this shot, sans flash of course. I didn’t really need to take a photo but when everyone else is doing so, you get swept along. To be honest I didn’t even look at the painting properly and because of that I feel quite cross with myself. However, playing our usual game of ‘spot the celebrity in an old master’, we came close to beating our Tiger Wood with a Banjo which we saw in Paris with a fairly good Andrew Lloyd Webber frightens the masses.

The Museo del Prado should really have been next on our agenda but we took the bold move of leaving the Big Daddy gallery for another trip, maybe without a grumbling teenager in tow, and plumped instead for the more manageable Museo Thyssen-Bornemisza. Best decision of the holiday. This heavenly gallery doesn’t allow cameras at all so there is a more relaxed atmosphere without curators yelling “No flash…no photos…” every few seconds. A private collection covering a huge timescale in art history, this was fun and educational to boot. Begin on the second floor, work your way anti-clockwise on each floor and you can see paintings by Raphael, Holbein, El Greco and Canaletto through to Kandinsky, Pollock and Lichtenstein. A new wing comprising some beautiful impressionist paintings collected by the lady of the family made this a breathtaking couple of hours. Even Rory admitted they were ‘alright’ so it must have been good and he took great delight in guffawing at the older, religious paintings where, we all agreed, baby Jesus looked unlike any baby we’ve ever seen – it must have been ever so dark in that stable.