Home  >  Blog  >  Cooking a curry with The Nearly Naked Chef 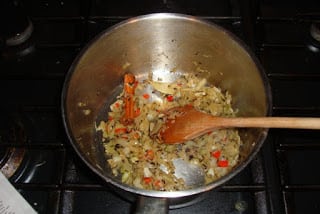 My husband, Dougie, is a quiet man, reserved, not one for small talk. Put him in the audience for a stand-up comedian, however, and suddenly he comes to life. You know those idiots who always shout out when the stand-up says, “Is there a ….. in the audience?”. Well my man is that idiot. It usually happens when they ask if there’s a doctor in the house or is anyone here Scottish: he just can’t help replying. Whereas yours truly, drama queen and altogether gobby individual, becomes a little reticent.

Over the years Dougie has been in conversation with numerous comedians such as Lee Hurst and Ross Noble and recently entered into a fascinating debate with Rhod Gilbert about a man on the railroads in America whose personality changed when a metal pole entered his brain. Dougie knew the chap’s name was Phineas Gage and earned himself a round of applause for being a clever bastard.

Last Thursday was no exception. We had gone to see Hardeep Singh Kohli’s show, The Nearly Naked Chef. Hardeep is a Scottish broadcaster and writer who was the runner-up in the first series of Celebrity Masterchef (he’s not bitter about losing out to Matt Dawson….much).  Under strict instructions from Rory and me to keep quiet, Dougie promised he would stay schtum, but I had my doubts as I knew there was a high  probability the Glaswegian comic would ask, “Is there anyone from Scotland in the audience?”  I heard a little yelp beside me as the shy, retiring husband piped up. Thankfully Hardeep was gentle with him which, considering Dougie is from Edinburgh, was rather unexpected. Hardeep referred to him as ‘Doogie’ throughout the evening but two women called Lisa and a cheery bloke from Newcastle thankfully helped move the focus of attention elsewhere.

We had such an enjoyable night, listening to fascinating tales of Hardeep’s Scottish childhood, his run-ins with prejudice and his time on Masterchef. Whilst his gentle humour entertained us, he started to concoct a curry using ingredients suggested by the audience in advance. Having performed on the same stage myself in my am-dram shows, and having been remonstrated with vociferously by the technical staff once for using a cigarette lighter in a scene from The Witches of Eastwick, I was astonished that the Health and Safety bods would allow all this cooking on stage (though I suppose it was an electric hob, not gas!).

Dougie was first in the queue at the end to sample the vegetable curry: there was enough for about 30 people in the audience to have a small bowl. Absolutely delicious. 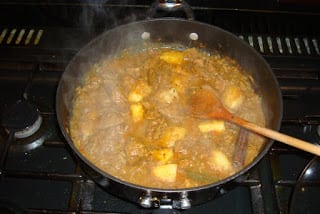 I came away rather inspired and yesterday bought all the ingredients for a lamb curry, the recipe for which was in the theatre programme. On a whim I decided to see if Mr Singh Kohli was on Twitter so I could follow him. He was, so I did. I sent him a tweet saying I had enjoyed his show last week and was about to make his lamb curry. Much to my surprise he tweeted back, asking me to let him know how it went. I was quite delighted he should make the effort to reply. I had another look at the recipe and became confused (it doesn’t take much). Was the garam masala powder in addition to some other ingredients or instead of? Best ask the chef, I thought. Another tweet sent. Another reply from the man himself – garam masala is in addition to the other spices and worth sprinkling on the top at the end. Ta very much, Hardeep, my own personal online chef. How cool is that?

The curry was excellent. The boys both had seconds. I sent a quick tweet to Hardeep telling him the curry was a triumph. He replied with one word….’Huzzah”.

ps: as requested, here’s a link to the recipe: click HERE