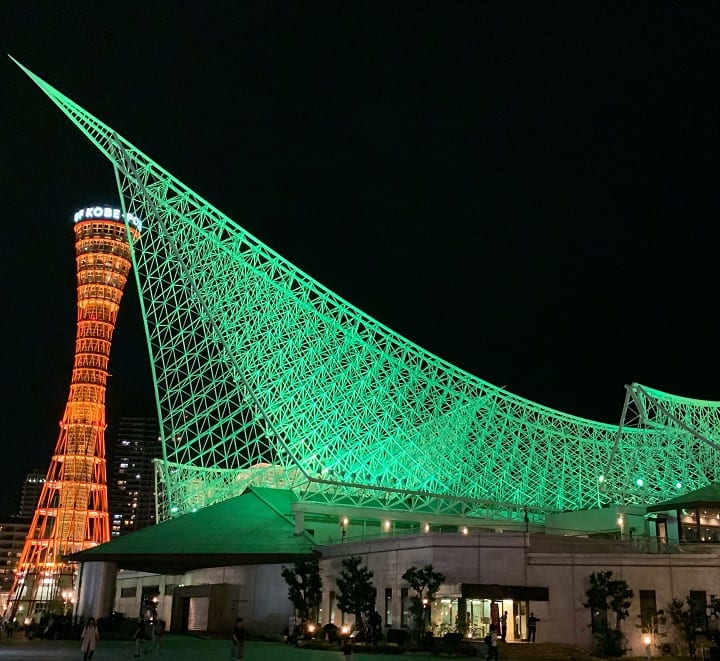 After six nights in Tokyo and four nights in Hiroshima, our Rugby World Cup trip itinerary moved on to Kobe. Our team, Scotland, already bruised by their battering from Ireland in Yokohama, would be playing their next match against Samoa. The small Scottish contingent travelling with England Rugby (there’s an oxymoron if ever I heard one) were given tickets for the Shinkansen (Bullet Train) which dispatched us to Kobe in just over an hour.

Our hotel, the ANA Crowne Plaza, was ideally placed next to the Shinkansen station, high up on a hill overlooking the port of Kobe. Its lofty location wasn’t the only high point. It was also the base for the Scotland team. Cue much excitement as we anticipated glimpses of our boys over the buffet breakfast.

I didn’t know much about the city, apart from being aware of its highly-prized beef. It was time for our usual first day recce to see what Kobe could unwrap for us. We could have taken the subway from our adjoining station to Sannomiya, the city’s central station. Far better to walk down the hill to take in the sights and keep an eye out for unusual sculptures. Thankfully a friendly, naked cyclist pointed the way. 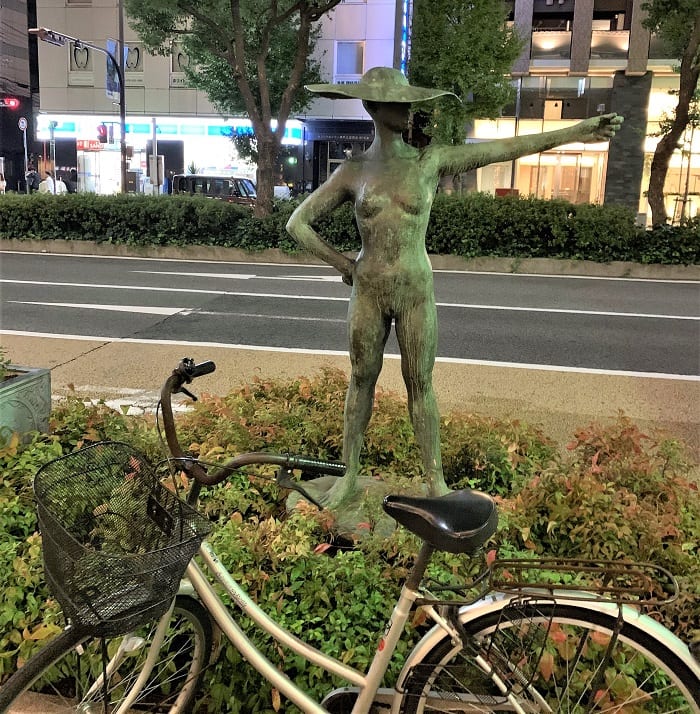 Kobe beef wasn’t on the menu for our first foray into its cuisine. We found ourselves in a wonderful, buzzing Chinatown. The sizzling beef we wolfed down that night was very tasty but thankfully didn’t come with Kobe beef’s high price tag. 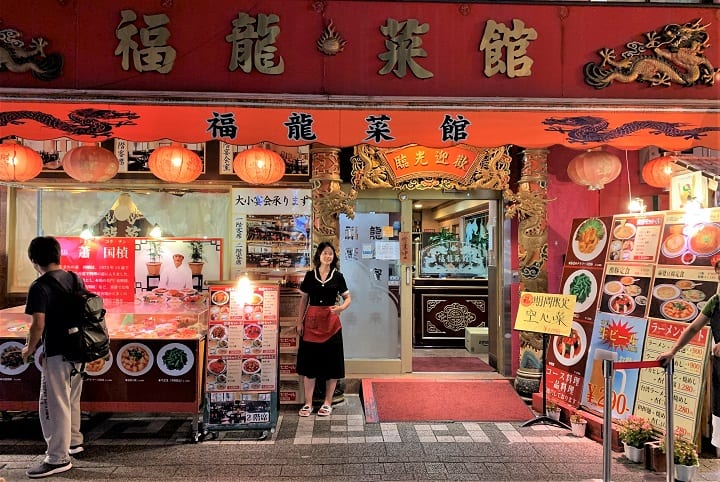 We walked off our dinner by continuing to the harbour itself. We were greeted with a vibrant, colourful port area which looked even more dazzling at night. The orange lights of Kobe Port Tower could be seen from afar, together with the electric green of the Kobe Maritime Museum. Add in the changing colours of the huge Ferris wheel, the cruise terminal and the Mosaic shopping mall, and Kobe has created a fantastic entertainment district by the sea. 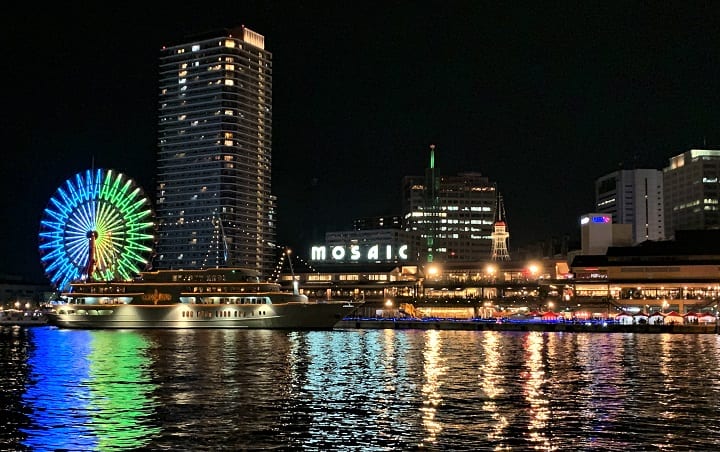 As we headed for the fanzone in Meriken Park, to watch the final minutes of the Australia v Wales match, we passed the Earthquake Memorial Park, dedicated to the 1995 event which caused over 5000 deaths and the destruction of 200,000 buildings. Hard to believe such devastation had affected this bright, smart, harbour area.

I didn’t expect to see a replica of Germany’s Wartburg Castle in a Japanese city but that’s just what’s on show at the Kobe Nunobiki Herb Gardens. It’s a fairly new attraction in Kobe and can be reached by taking a cable car (ropeway) adjoining the Shin-Kobe station and our hotel. 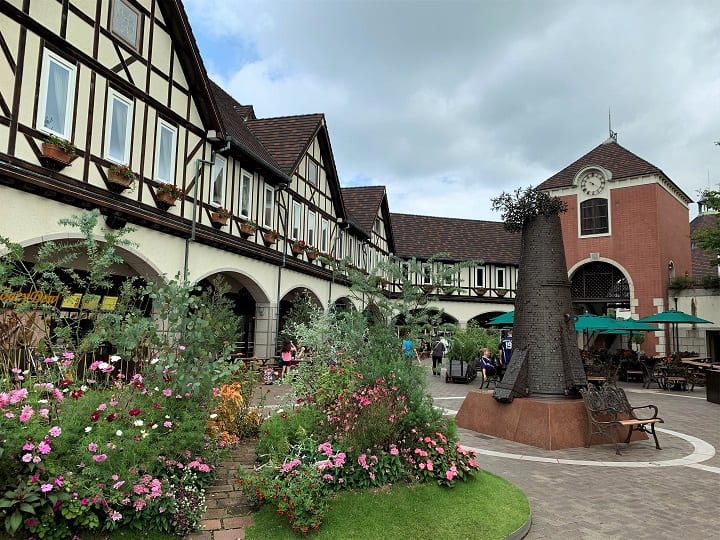 It made sense to just buy a one-way ticket to the top and then walk all the way back down. On the way up in the cable car we spotted the Nunobiki no Taki waterfalls and the Nunobiki Gohonmatsu Dam. Hikers can reach these on foot. When it’s hot and you’re short on time, the cable car gives you a bird’s eye view instead.

At the very top is the German castle and a plaza described in the literature as ‘a space inspired by Europe in the Middle Ages’. I’m not sure how we missed the fragrance museum but we did, unfortunately. We did, however, find a spice museum, an abundance of flowers and shrubs, a herbal footbath, a large glasshouse and hammocks to chill in. 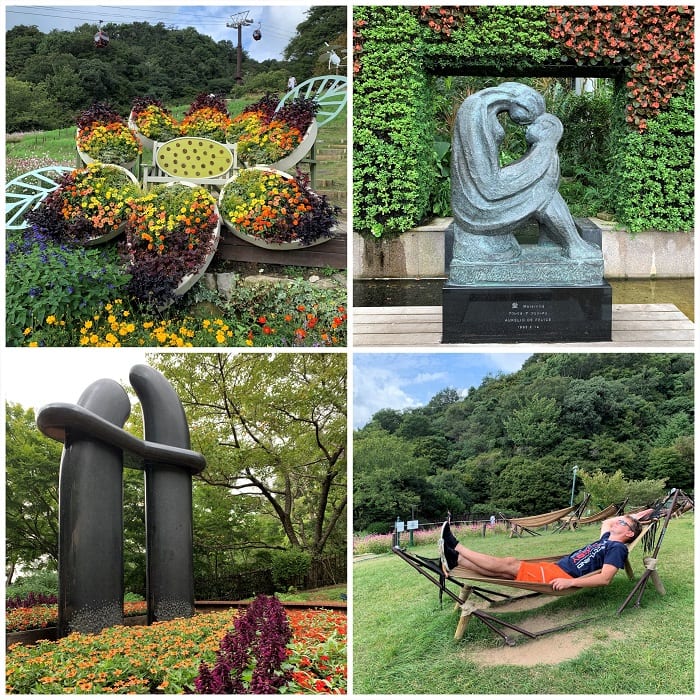 It made for an unusual morning, spotting beautiful flowers as we snaked our way down the hill. It’s a very relaxing spot and the views, on a clear day, are superb – all of Kobe’s bustling harbour spread out before us. 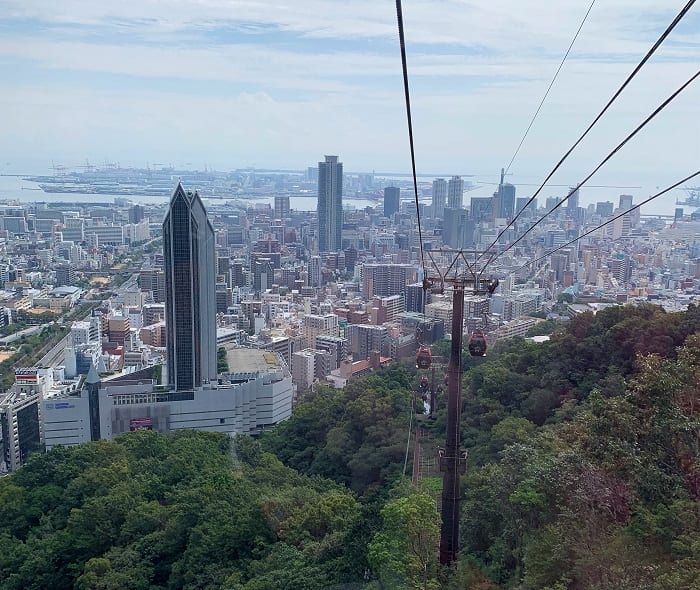 Buoyed by a Scotland victory against Samoa the previous evening, Dougie and I were on a high as we planned our day trip for some sake-supping. I think the post-match celebrations must have fogged our brains as we took the wrong train from Sonnamiya station and ended up with quite a walk, on a warm day, to reach Hakatsuru. It was certainly worth it. A free museum, with tons of interesting information featuring video screens and realistic models. You could even dress up. Dougie enjoyed that bit. 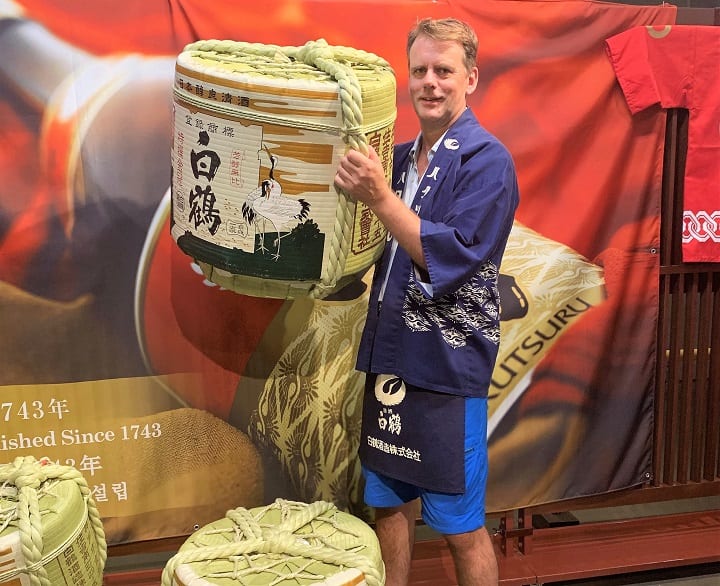 At the end of the self-guided tour, there was a free sake tasting. We tried four different versions and loved them so much we bought a bottle to enjoy back at the hotel.

On our last morning in Kobe we walked round the very surreal European district. Kitano features a number of old colonial buildings that were used by foreign ambassadors and businessmen. There are French, English and Italian houses plus the former consulates for the Netherlands and China. We hunted out a small version of The White House; the former Consulate of the United States. I rather liked the architecture of Weathercock House, former residence of a German trader. 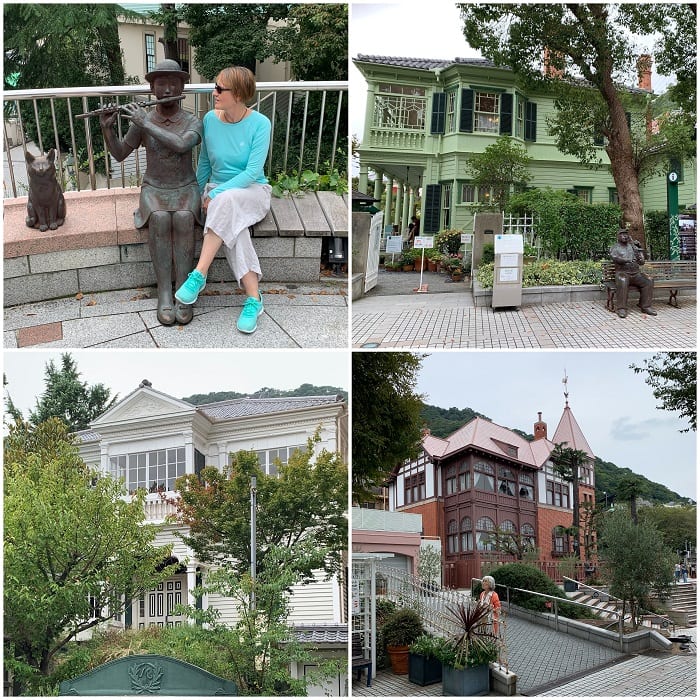 Pushed for time, we decided not to buy a set of tickets which allowed access to a certain number of these exclusive residences. In hindsight, I think we missed a great opportunity to see the interiors which would have included paintings by Matisse, a reproduction of Sherlock Holmes’ study and a stuffed polar bear.

In the centre of Kitano is a plaza with several statues of musicians. Jazz came to Kobe via the port in the 1920s and became a huge part of the city. There’s an annual jazz festival in this part of the city.

We may have missed a trick by not purchasing tickets for the European houses but we made up for this oversight, in a small way, by visiting the Kobe Trick Art Museum. Honestly, what were we thinking? It wasn’t at all educational, it didn’t showcase any fabulous art, history or culture. But we had such a laugh, scrabbling about on the floor of different rooms, to participate in some silly optical illusions. The resulting photos were some of my favourites from the holiday. 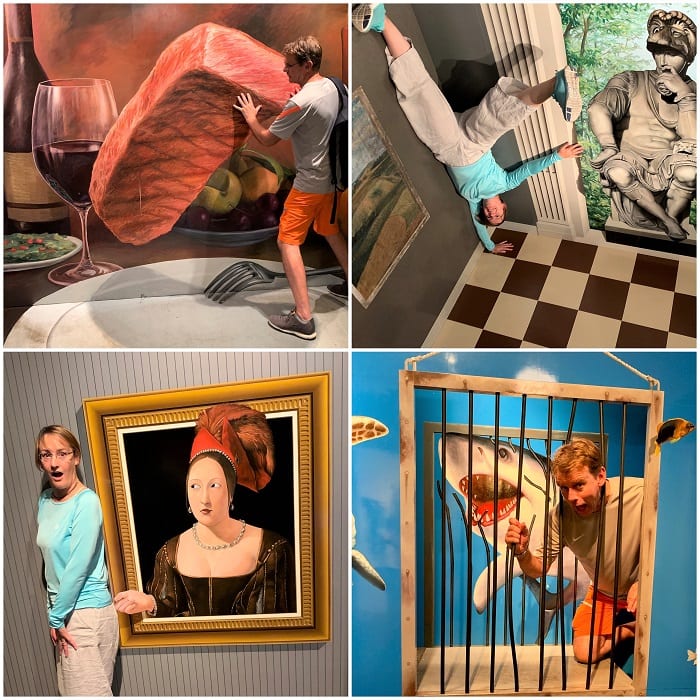 I have a confession to make. We didn’t get round to sampling the Kobe beef. I know, that’s inexcusable. But even without a taste of its famous fare, Kobe certainly hit the spot. It was such a happy, fun, city – full of life and lights, hills and harbours. Plus, Scotland beat Samoa 34-0, helping us associate the city with a great deal of joy. 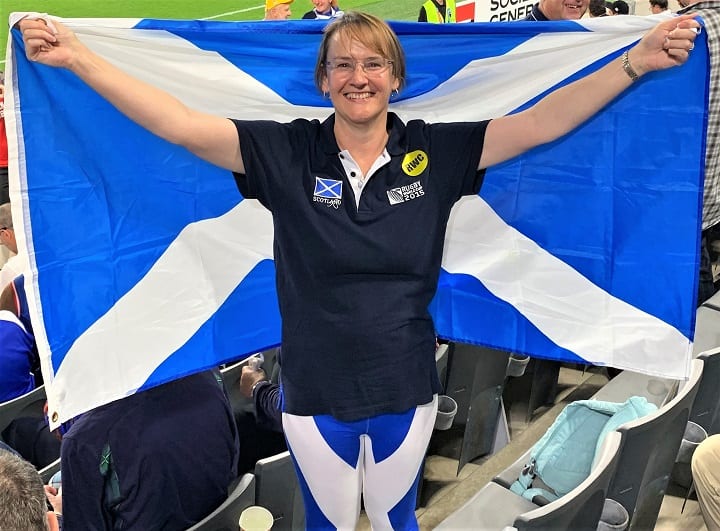