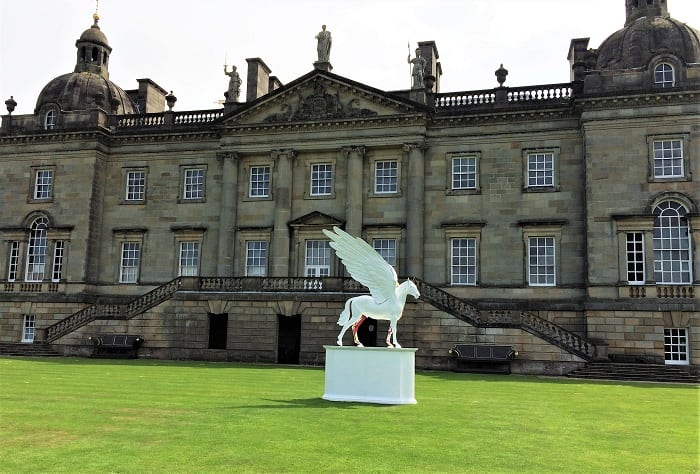 The exhibition was meant to be in Vienna. But due to some last minute changes, this eye-popping collection, from one of Britain’s most famous contemporary artists, ended up in Houghton Hall in Norfolk.

The home of Sir Robert Walpole, the first Prime Minister of Great Britain, Houghton Hall was built in the 1720s, a fine example of Palladian architecture. Walpole’s descendant, the 7th Marquess of Cholmondeley, took the enlightened decision to remove the old family portraits from the state rooms in March this year and replace them temporarily with Hirst’s new Colour Space paintings. Out with Great Granny and in her place, canvases filled with multi-coloured spots. 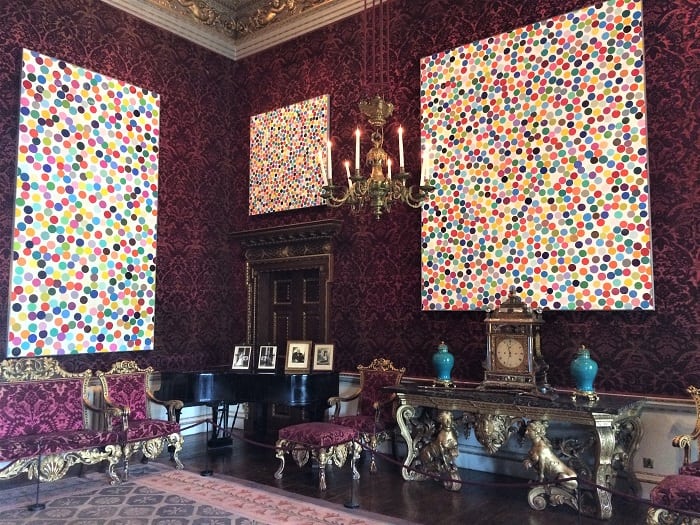 Hirst is well-known for his Spot Paintings series which began in 1986 but this new collection, never shown in public before, continues the theme. According to Hirst, they have ‘the fallibility of the human hand in the drips and inconsistencies. There are still no two exact colours that repeat in each painting, which is really important to me. I think of them as cells under a miscroscope.’

In the magnificent Stone Hall there are two perspex boxes full of plastic balls which are propelled into the air with blowers. Whether you recognise this as art or wonder if the National Lottery draw is about to take place, you can’t help but be amused, particularly in such a lavish setting. It was also incredibly loud.

In the grounds, you can see a number of Hirst’s best-known sculptures from the last fifteen years. Standing over 10 metres high, mimicking a similar ballerina sculpture by Degas, The Virgin Mother (2005-6) is positioned in the gardens, in all its anatomical glory. The colours are vivid and plasticky and yet it’s constructed from bronze. 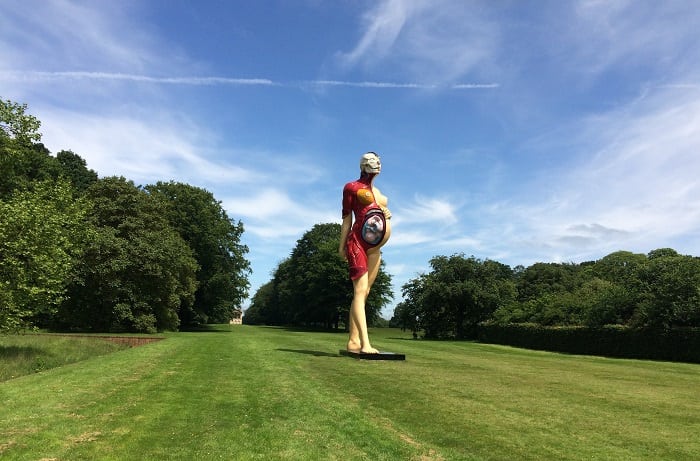 In prime position on the lawn in front of the hall are similar brightly-painted bronze figures of a unicorn and winged Pegasus: Myth (2010) and Legend (2011). I also loved The Hat Makes The Man (2004-7) where this time the bronze is painted to look like felt and wood. It’s incredible when you look at it close-up. 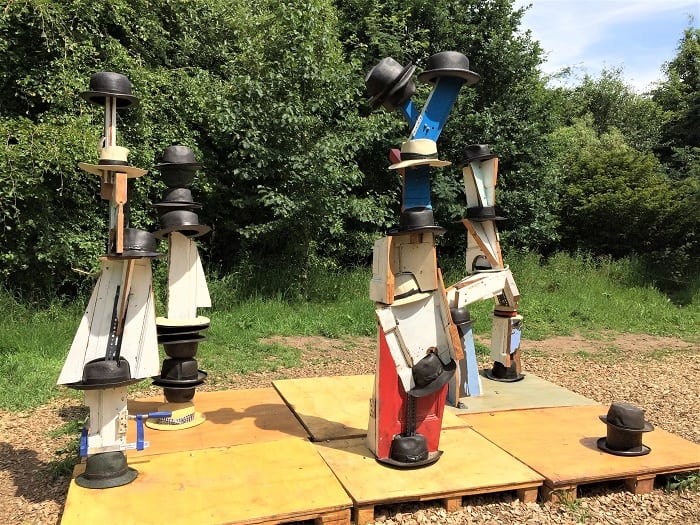 Towering high in the courtyard of the stable block, is Charity (2002-3), based on the collection boxes that were often found outside chemist shops in the 1960s and 70s. Hirst is highlighting the complexities of charity today: its altruistic aims conflicting with marketing strategies necessary to be successful. In this sculpture, Hirst’s girl is scratched and worn and it has been broken into, hence the crowbar and littered coins on the base. 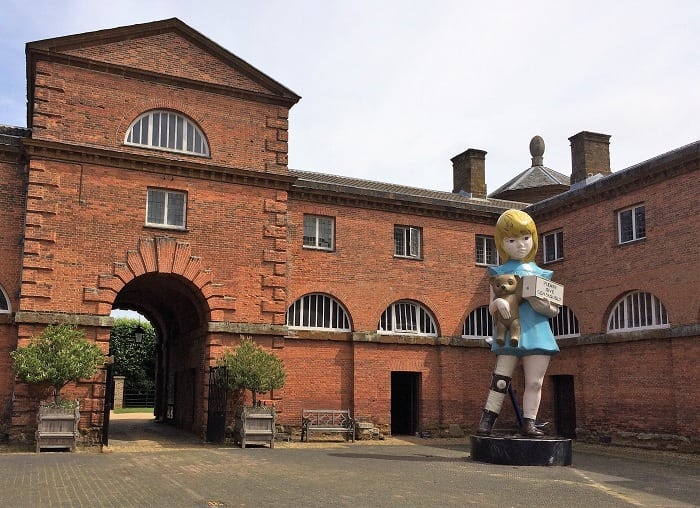 There are works by Damien Hirst to suit all tastes. Turn a corner in the house or garden and you’ll see a woolly dog with his bone at one end of the taste spectrum and St Bartholomew with his flayed skin at the other. 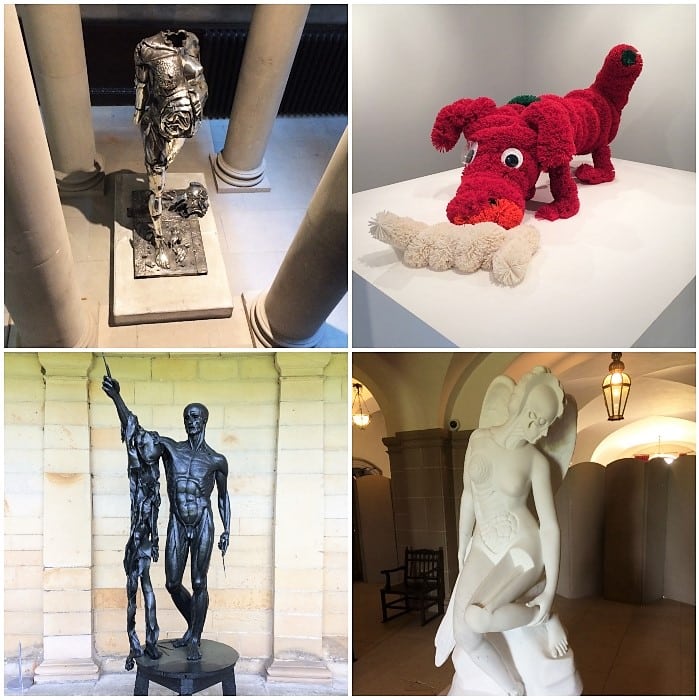 There are also permanent works by other contemporary artists in the grounds. Rachel Whiteread’s inside-out Houghton Hut can be found amongst the trees and it’s worth hunting out James Turrell’s Skyspace: Seldom Seen, just to take a breather in this reflective space: go inside and let the light flood in from the square hole in the roof.

The house itself, with or without Hirst’s additions, is fabulous.  A collaboration between two important British architects of the age – Colen Campbell and James Gibbs – and with sumptuous interiors by William Kent, Houghton reflected the taste, power and wealth of Sir Robert. I loved the ornate shell bed in the Green Velvet Bedchamber and the dining table in the Marble Parlour.

During the eighteenth century, Walpole also amassed one of the greatest collections of European art in Britain but the 3rd Earl of Orford was forced to sell the picture collection to Catherine the Great of Russia due to debts. Over the years the hall was left empty and it was only when the 5th Marquess of Cholmondeley and his wife, Sybil (nee Sassoon) took on the house just after the First World War, that it was restored to its former glory. 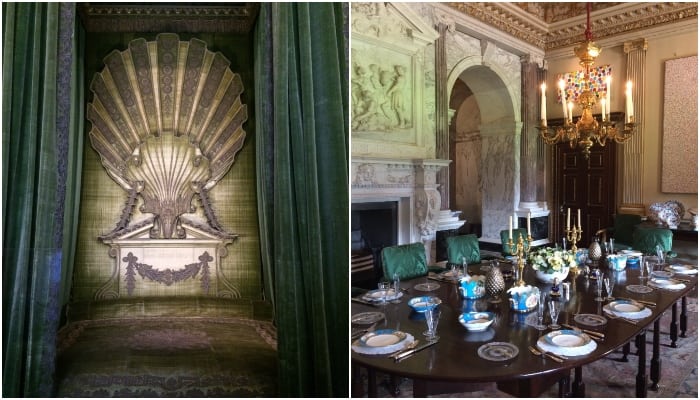 In the stable block is a wonderful collection of model soldiers, started by the sixth Marquess of Cholmondeley. Numbering about 20,000 tiny figures, it’s one of the largest in the world. Here you can see recreations of the Battle of Waterloo and The Great War in exquisite detail. 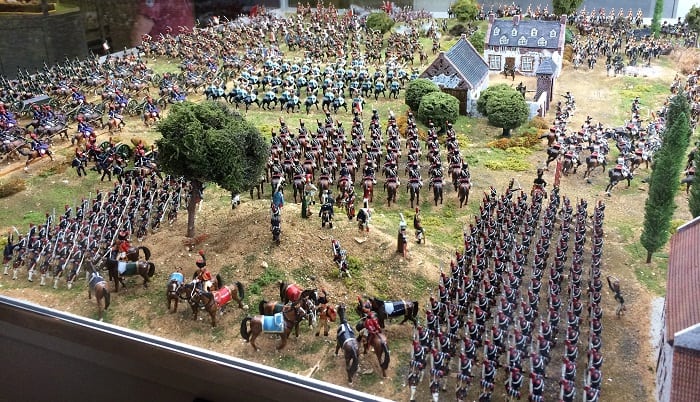 In the grounds you are close to deer and you can see the cattle at the other side of the ha-ha. The walled garden is also delightful with some fabulous flowers. Look out for Jeppe Hein’s Waterflame feature and try to work out how he combines water and fire. The café is also worth a visit: excellent food in very pretty surroundings. 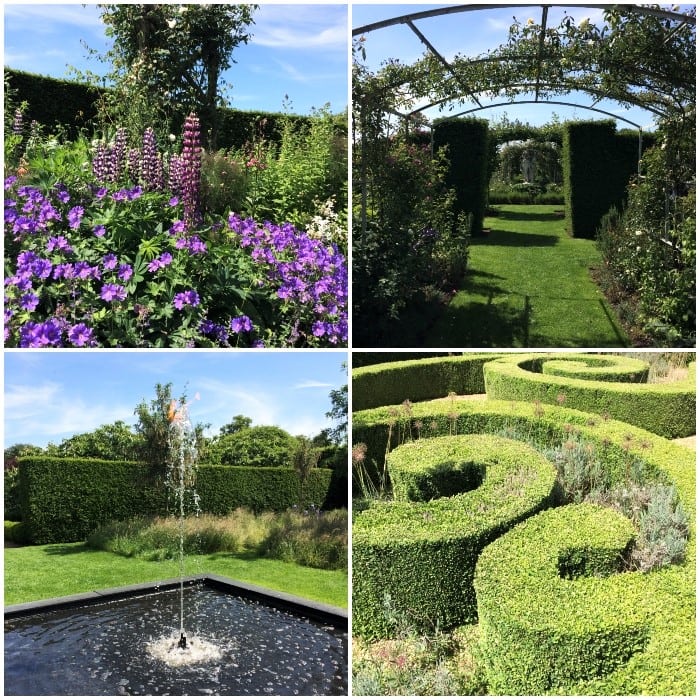 Edit: The exhibition closed on 15 July but Hirst’s outdoor pieces and his sculptures on the ground floor of the hall remain until the end of September 2018. Only his spot paintings have been removed. Access to house and gardens, continues Wednesdays to Sundays and Bank Holiday Mondays from 11am to 4pm (last entry). It costs £15 for adults (£12 for gardens and grounds only). Children under 17 are free. For more information, contact www.houghtonhall.com. 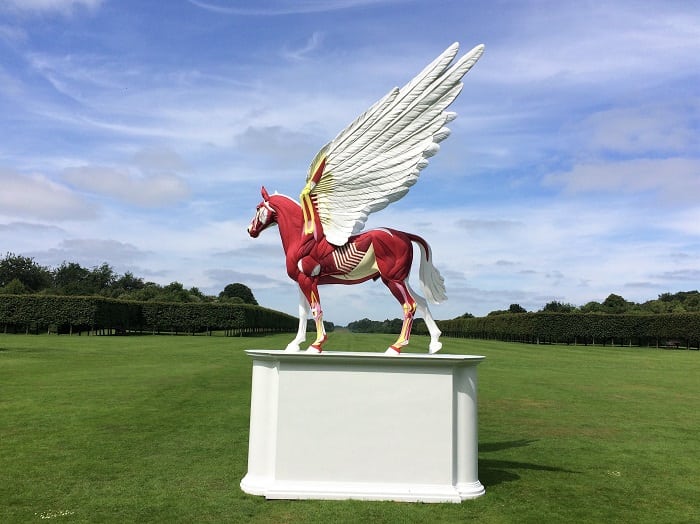