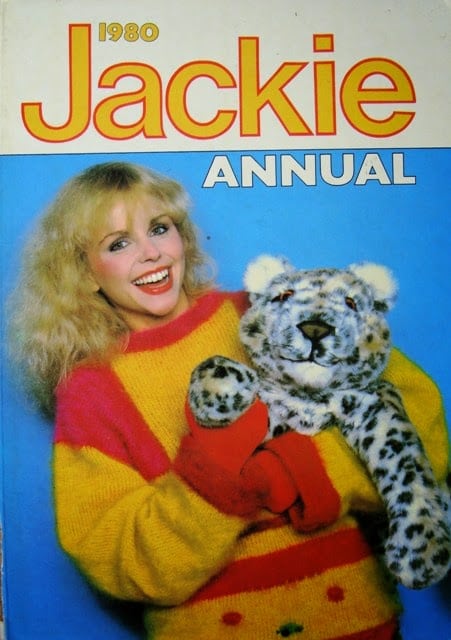 A suggestion from the Jackie Annual 1980 on small talk worth trying on a boy in the cinema. The article was titled ‘Boy Calendar – where they’ll be – what they’ll be wearing – and how to catch them.’ Apparently boys at that time could be found fishing, watching football and jogging with suitable openers being “Are those really maggots?” “Why is that one dressed in black?” and “You’re not Brendan Foster’s brother, are you?”

We may cringe at this now and despair of encouraging girls to attract boys by appearing needy or dim, but at the time the Jackie magazine was a trail-blazer for the young teenage girl market. I adored the magazine and nothing could prise it from my grasp when it dropped through the letter box every week as I hurriedly turned to the Cathy and Claire problem page.

The magazine, offering fashion tips, beauty secrets and comic-strip stories, was published between 1964 and 1993 but was probably in its heyday in the 70s. Looking back at my old 1980 annual I realise how tame and innocent it all was. It’s full of silly quizzes and articles about boys. ‘Catch him if you can’, ‘Could you light his fire?’ and ‘Are you a dating disaster?’

References to where you should go with your date for ‘private moments’ hinted that these activities should be chaste as they included going to the local library or taking a round trip on a country bus.

Jackie told me the way to a man’s heart was through his stomach though I’d like to know how many young boys were treated to the enticing recipe of chicken with jacket potato and frozen peas – with grapefruit for starters and cheese and biscuits for dessert.

Celebrities were still fêted: no change there. The ‘wanted men’ in 1979/80 were Rod Stewart, Mark Hamill, Leif Garrett and Bob Geldof.

There’s a wonderful article about gauging personality by looking at the shape of your thumb. Apparently my pointed thumb indicates that I don’t like giving away much about myself but am a sympathetic listener.

I was always a sucker for horoscopes though I didn’t heed their advice as I married the one star sign, Aries, I was warned to stay away from.

Teenage girls today must have a wealth of information at their disposal to help them through those difficult years but I don’t suppose it’s any easier. They might have the internet to scour for advice but the dating game will always be challenging, although at least now they can chat to boyfriends on a mobile phone rather than have to stand in the hall trying to whisper into the landline phone as members of the family wander past.

I’ll leave you with this gem from Jackie 1980, so representative of the day. A light-hearted piece on ‘You know it’s time to leave the party when…’ suggests ‘your lurex boob tube is unravelling at the rate of 3 inches every ten minutes.’

This article originally appeared in the Lincolnshire Free Press in the Trish Takes Five column. Due to a glitch it didn’t appear online so I thought I would share it here instead.