As we drove towards Portsmouth harbour I could see the distinctive shape of the Spinnaker Tower against the sharp blue of the sky. This puzzled me.

“I thought that tower was in Plymouth,” I said to my husband, Dougie.

“Remind me what you did your degree in?” he replied.

Silence ensued for the remainder of the journey; one of us was acutely embarrassed and the other was smirking.

We were planning to spend a day at Portsmouth Historic Dockyard, a place we’ve always wanted to visit, primarily to have a look around HMS Victory and the Mary Rose, two iconic ships which are located here. What I hadn’t anticipated was how many other attractions have also made their home there. There is a large collection of ships and museums in this working naval base, covering 800 years of naval history.

Buying an ‘All Attraction’ ticket online seemed like the best option for us. We realised there was little value in trying to see everything all in one day, so, like our visit to Bletchley Park that same weekend,  we were reassured by the offer of unlimited free returns in one year.

What can you see at Portsmouth Historic Dockyard? 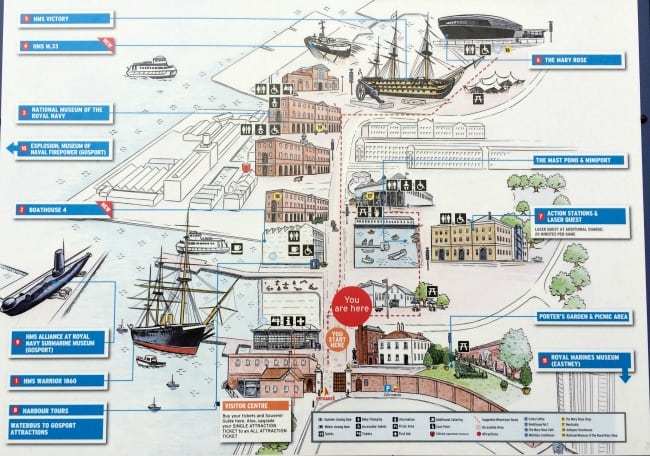 There are two main locations for the attractions: Portsmouth harbour and across the water in Gosport. The All Attraction ticket obviously allows entry to all the exhibits but also includes harbour tours and the waterbus across to Gosport. Here’s what you can see:

There are also shops selling antiques, gifts and Royal Navy souvenirs plus numerous food outlets: a number of cafes/restaurants plus food stalls.

We made a beeline for Victory as it is a ship we hold very close to our hearts. In 1998, 34 tonnes of Victory oak and copper were sold to three Norwich businessmen to raise funds for the upcoming bicentennial celebrations of 2005. David Roger Burton was one of a few local craftsmen given the task of creating new items from the old wood to sell to the public. We saw the collection at craft fairs in Norfolk and purchased a few items from David over a number of years at his shop, The Staithe Gallery, in Wells-next-the-Sea. . It’s very special to have pieces from Victory in our own home – to touch them and wonder about the history within each piece of wood and copper. 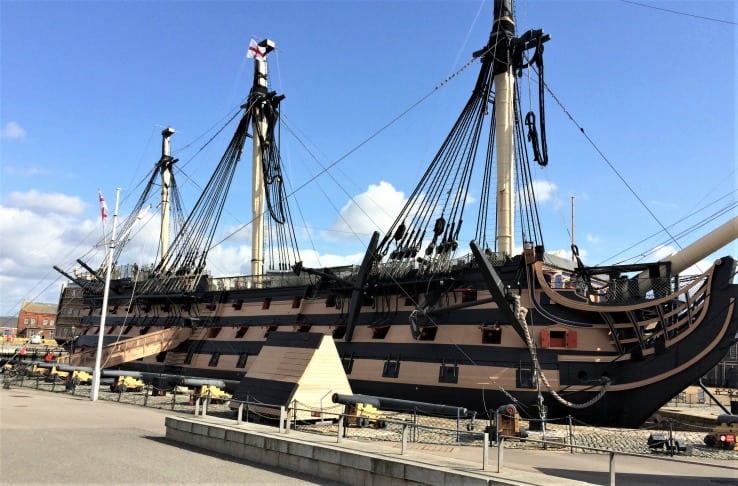 HMS Victory is a stunner. It looks as if it’s been designed by Disney. You could be forgiven for temporarily thinking you’d stepped into a theme park or the set of Pirates of the Caribbean. Once painted yellow, scientists have deduced that its original colour was salmon pink so, as part of the current restoration, it now has a pinkish hue. The masts are down at the moment for repairs but it’s still a magnificent sight.

Visitors are given a superb audio guide which works by pointing at a number of receivers on the ship. It doesn’t feel restrictive, you can hear the clips out of order if you wish, but the whole story of the Battle of Trafalgar is told, the narration including battle sounds. 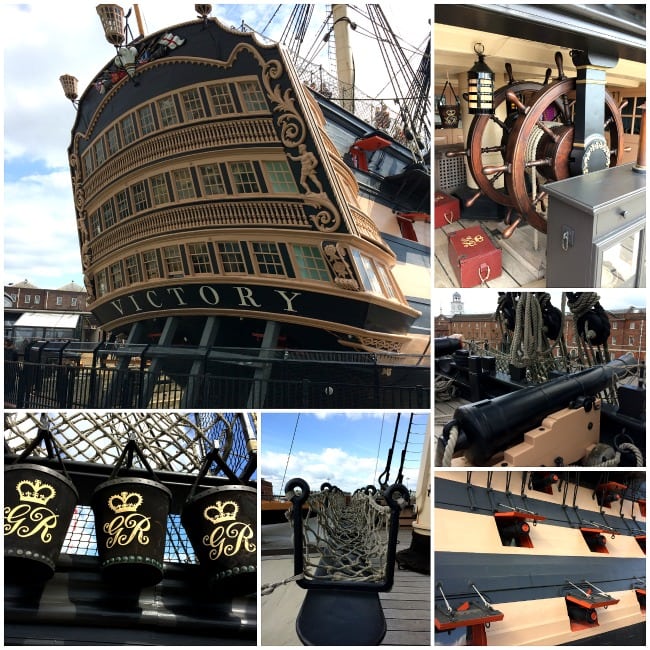 Despite my advice to my 6′ tall husband to mind his head on countless occasions, he still managed to slam into a beam, just as were listening to Nelson himself being knocked to the ground by the fatal shot. Dazed and desperate not to swear, he staggered around as we followed the action down to where Nelson was cared for by the ship’s surgeon. I think my own casualty was hoping the ghost of Dr Beattie might lay a cold compress on his bruised head. Certainly he was tempted to have a lie down in one of the hammocks.

“Kiss me Hardy,” Dougie said to me, hoping for, at least, a peck on the cheek and a word of comfort.

“Oh for goodness sake! Give it a rub. You’ll be fine.”

I can remember quite clearly all the media reports at the time when the Mary Rose was finally brought to the surface in 1982. A third of the ship had been protected by the Solent mud for 400 years and it’s this fragile portion of the vessel that now resides in the sleek, futuristic building in Portsmouth. The building reminded me of the Nemo science centre in Amsterdam and the sight of the ship itself brought back memories of the Vasa warship carefully preserved, following a similar sinking, in Stockholm. 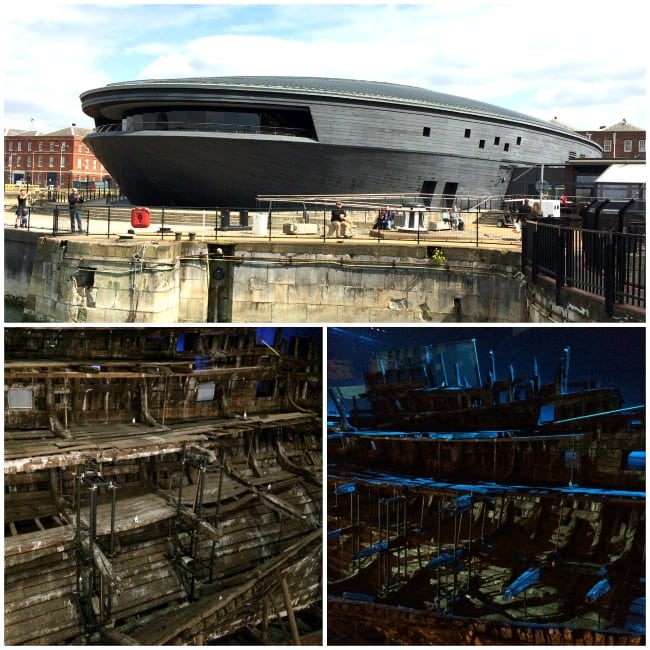 The remains of Henry’s VIII’s warship, plus the hundreds of amazingly-preserved artefacts, are exhibited in nine galleries. Look through the vast glass walkways and see the ship, carefully positioned, with the lights dimmed. The ship then springs to life with a superb light and sound experience which projects characters onto the ship so you can see people working as they would have done in 1545. On the top floor, visitors move through air-locked doors so that they can breathe the same warm, humid air as the Mary Rose and admire it from the balcony.

Al credit to the creators of this fine home for the Mary Rose. It’s one of the most incredible museums I’ve seen and at no time did we feel rushed. There was plenty of time and space to just stand, look and admire.

National Museum of the Royal Navy

A place to soak up even more battle drama with exhibits about Nelson, his ship and, at the end of the Trafalgar multimedia experience, see the impressive 42 ft long panorama painting of the battle by William Wyllie. An exhibition called ‘Hear My Story’ tells previously undiscovered accounts from ordinary men and women involved in the Royal Navy over the last 100 years.

We were fortunate to turn up at the departure point just as a trip was about to leave so we hopped on the boat and had an enjoyable 45 minute ride around the harbour. This is a great way to get your bearings and also exciting to see working Navy vessels moored in the harbour, having returned from duty. We also managed to see the Spinnaker Tower from a closer range. I can categorically state that it is, indeed, in Portsmouth. 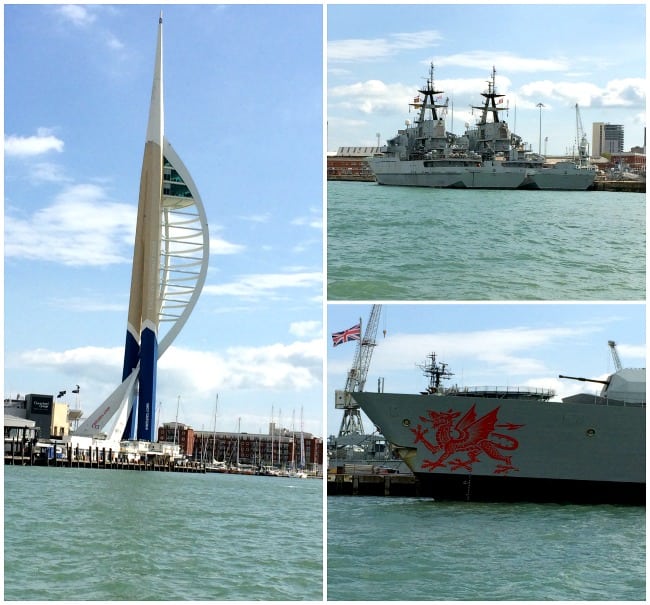