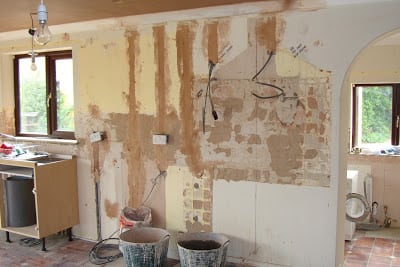 The plasterers arrived on Monday. A mouthful of teeth between them and a hearty two sugars each in their tea – balance has been restored after the no-sugar, smart, neat-bummed brigade from last week.

Can you spot the ceiling in this photo which has been skimmed? Rory came home on Monday night and thought the brown ceiling was really cool. I told him it was temporary.

The dust is getting everywhere. We have arches between the kitchen and utility room but also between the kitchen and the hall. The temporary curtain we have rigged up is worse than useless: it may, in fact, be wafting the dust further up the stairs. The chaps have put another sheet up in front of the curtain. It helps a bit although yesterday I walked through it and it unravelled and fell on my head, covering me in plaster dust. I said ‘bollocks’ quite loudly and I think they were shocked as they had mistaken me for a lady. 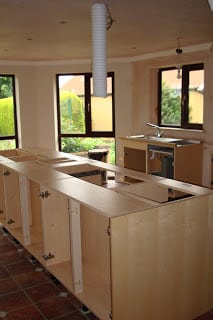 Yesterday we started to have ‘things put in’ to the kitchen! Hoorah. Slightly unnerving that the units coming in are not much different in colour to the ones that went out. We seem to be keen on maple in this house. Dougie is now saying we should have just changed the bloody doors.

So what’s next? Appliances to be fitted, new floor, lights and counter tops still to be done. Another week maybe? Then the decorator comes to paint it.

We also have a white elephant living in the bathroom. See its trunk coming down through the ceiling searching for water? Feeding him on microwave meals at the moment, but he, like the rest of the family, is tiring of ding ding food and he tells me he fancies a trip out to a restaurant on Friday. I told him I’d book a table.