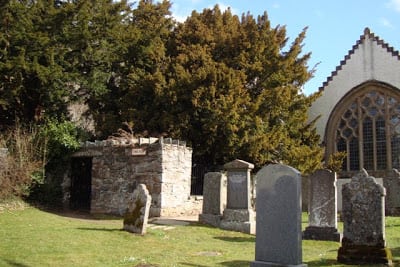 Holidaying as we were at the geographical heart of Scotland, a ‘must-see’ of the trip was only a five minute drive away. Is this tree the oldest living thing in Europe? The Fortingall Yew is estimated to be between 2000 and 5000 years old. Its trunk was once measured as 16 metres in circumference. The tree is now a shadow of its former self because of natural decay but also because parts of it were chopped off over the centuries to make drinking cups ‘and other curiosities’ and ‘local boys of the village’ in 1806 damaged it by lighting a fire underneath it. Legend also has it that Pontius Pilate was born here and played happily under its branches as a child. Sound far-fetched but this is the sort of legend I love to read about when I visit a place. 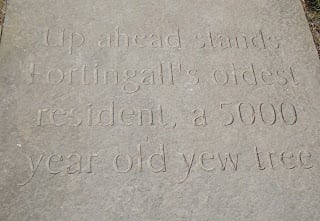 The steps leading to the tree have been etched to give visitors a flavour of the history of this ancient yew, each slab suggesting who has been there before (kings and queens and scholars) ending with the words, ‘picts, warriors and you!’

The tree has been protected by a wall since 1785 to stop any more souvenir-hunting but it’s still easy to view and there is something quite special about seeing such a primordial species of tree at close quarters. I understand cuttings have been taken by the Forestry Commission to be grown at Roslin (Rosslyn) near where Dolly The Sheep was cloned. Roslin is itself a sacred site in Scotland, its chapel made even more famous by its inclusion in the denouement of The Da Vinci Code.  The cuttings will be planted at woods throughout the country, including the arboretum at Scone Palace so the grand old yew will continue to flourish for many more years to come.

To continue our fascination with all things ancient, that evening we had dinner at the Kenmore Hotel which is apparently the oldest inn in Scotland, established in 1572. We couldn’t get a table at its new Grill restaurant but were able to choose from the same menu in the cosy, traditional Poet’s Bar where, in 1787, the Bard, Robert Burns, so taken with the views of Loch Tay, composed a poem and wrote it on the chimney breast of the fireplace. It’s still there, the pencil marks probably re-written a few times over the years and it’s now encased in glass. Prince William visited in 2005 but I didn’t see any graffiti from him on the walls.

We had a delicious meal – steak and chips for the boys and a selection of tapas for me which would probably not have been on Rabbie’s plate when he visited. In honour of the man who was there before us, however, we uttered the lines from his famous grace which is often quoted at Burn’s Suppers across the world: 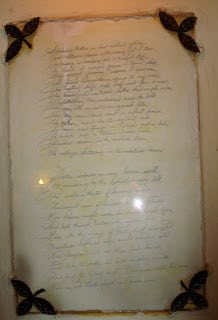 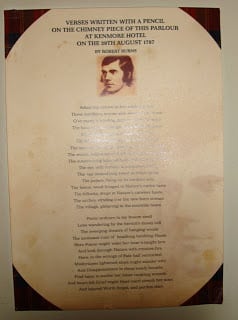