“Let’s see if I can jump as far as Jonathan Edwards,” said Dougie, limbering up on the seafront at Ilfracombe.

“I think you’ll struggle,” I cautioned. “His triple jump record stands at 18.29m and you’ve just had your lunch!”

Game as ever, my husband looked carefully at the extremely long mosaic, designed to commemorate Edwards’ phenomenal, unbeaten feat at the 1995 World Championships in Gothenburg. Each mosaic circle indicates the points for each part of the hop, skip and jump and the whole piece of art is a fitting tribute to the man who lived in Ilfracombe from 1976 to 1987.

Needless to say Dougie’s efforts were poor and he was left to blame his unsupportive family, an insufficient run-up and forgetting to remove his rucksack. 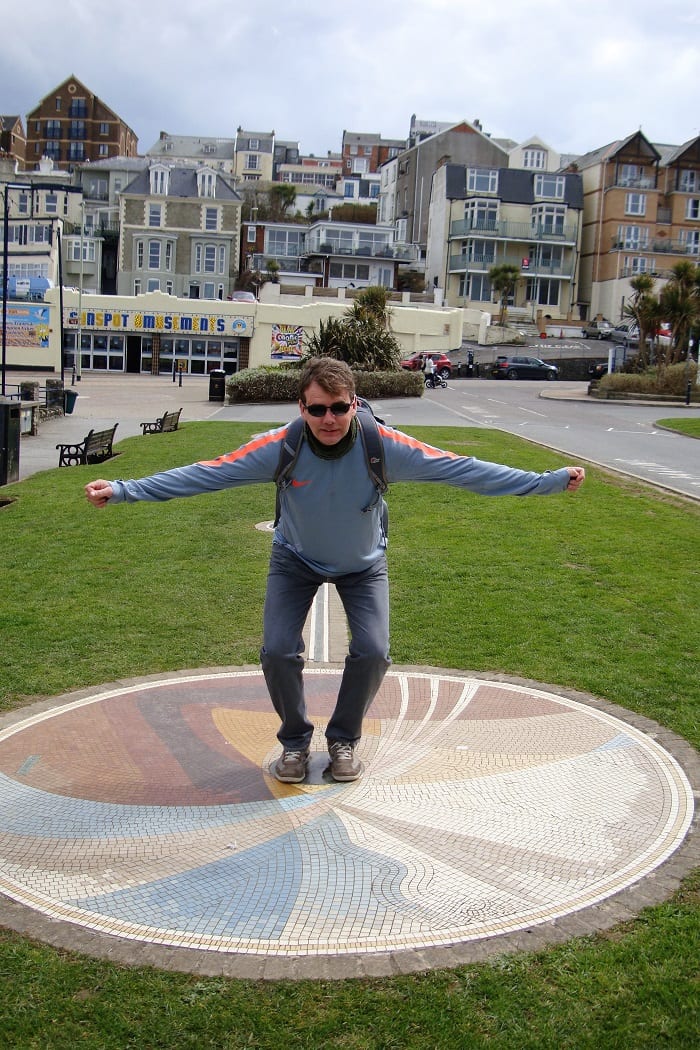 We hadn’t realised Ilfracombe had a famous athlete as a past resident. It was another renowned local, artist Damien Hirst, who had sparked our interest in visiting this lovely North Devon beach resort, just a few miles from our holiday home in Woolacombe.

The town was shrouded in fog as we arrived which meant our first glimpse of Hirst’s startling sculpture, Verity, was all the more eerie. “A modern allegory of truth and justice” according to the artist, this bronze work is of a pregnant woman, standing on a pile of legal books and holding a sword and a set of scales. Her stance is based on the sculpture by Edgar Degas, Little Dancer of Fourteen Years. At 20.25m high she is 10 inches higher than The Angel Of The North and thus the tallest statue in the UK.

It’s a bit of a Marmite sculpture: some people love its strength and the message it conveys, others find the anatomical cross section of its head and torso, revealing the skull and developing foetus, as inappropriate for a traditional English seaside resort.

Either way, it has certainly been good for tourism as you can’t come to the area and not see for yourself.  Did I like it? I can’t say it’s a favourite piece of art but it is undoubtedly impressive: I found myself examining her from different angles and constantly turning back to look at her as we walked away.

My heart was affected more by a much smaller sculpture, on the top of Capstone Hill. It’s a memorial to a 14 year old Russian student, Ekaterine (Kate) Frolov, who fell to her death from nearby cliffs in 2000 after becoming lost in the fog. This poignant statue, commissioned by her family, gradually appeared to us, ironically as the fog lifted from the town, as we walked up the hill.

The views from the top weren’t as good as we’d hoped. You should be able to see Wales across the Bristol Channel but it wasn’t quite clear enough. Turning round, we had to be content with a view of the town, Jonathan Edwards’ jump becoming even more impressive when the mosaic is seen from afar. Very prominent are the two brick cones belonging to the Landmark Theatre. Locally referred to as Madonna’s Bra, they are unquestionably visible and, like Verity at the other end of the harbour, indicative of Ilfracombe having the confidence to experiment with art and architecture.

Ilfracombe has much to offer visitors but we only really skimmed the surface in the few hours we were there. If we had been dressed for the beach, I’m sure we would have investigated the famous Tunnels Beaches, Victorian hand-carved tunnels which lead to tidal bathing pools: a must for summer visitors. We ran out of time to see the haunted Chambercombe Manor and didn’t visit the aquarium either…or The Roundhouse…or any of the beaches.

We did, however, walk up Lantern Hill to see the little St Nicholas Chapel which dates back to 1321. It was built as a place of worship for people living and working around Ilfracombe harbour until 1540: when Henry VIII dissolved the monasteries, it ceased to be a chapel.  From the middle ages it maintained a light to guide shipping which it still does today; it is said to be the oldest working lighthouse in the country.

Before we left we returned to the seafront and made a bee-line for the clapping circle where, if you stand exactly at its centre, you hear a ‘ping’ echo back when you clap your hands. Dougie was particularly keen to try this as, I’m sure, were a number of curious onlookers, seated on nearby benches, who had witnessed his earlier athletic prowess and wondered what else he could do to entertain them.