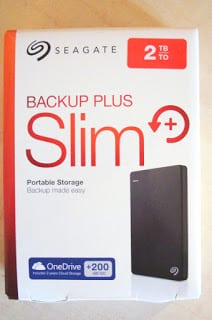 For someone who spends a lot of time on the computer, I really am quite a technophobe. I’m also not very sensible. Documents and photos have been stored on our computer for many years and I’ve rarely had a thought about what I would do if something went wrong.

A few weeks ago we bought ourselves a new computer, having managed for a ridiculously long time on an old laptop with a non-working keyboard (a large glass of sticky orange juice to blame for that damage). The battery on the laptop died a death many moons ago so it was permanently plugged in, with an extra keyboard cluttering up the desk.

I do think one of the reasons for not upgrading our PC sooner was the thought of how I would transfer all our files. In the end, I grasped the nettle, purchased a new desktop computer and began the transfer process. An old external hard drive seemed to do the trick initially but then ‘computer says no’ just when I thought I was succeeding.

Instead of buying a new portable drive, I persevered with a selection of memory sticks and constant messaging of my student son who despaired of my hopelessness. A week later, just when I had completed the process, I was asked if I would like to review a portable hard drive from Seagate. Despite the unfortunate timing, I decided to give it a try because, having spent many hours fiddling about with the new PC, I realised, belatedly, that having a regular routine for backing up my files would hopefully stop me getting into a similar mess in the future.

Seagate’s Backup Plus Slim 2TB Portable Storage gadget does exactly what it says on the box.

Seagate: The global leader in data storage solutions so they know what they’re doing.

Backup: It backs up your files so if your own computer blows up, you won’t lose all your stuff.

Plus: As a bonus it gives you 200GB of Cloud Storage on OneDrive for two years after activation. It also gives you access to the Lyve photo app which organises all your photos and videos in one library.

2TB: I had no idea how huge 2 terabytes was until I did the maths. This thing is the equivalent of 2000 GB. For comparison’s sake, my phone’s capacity is 16 GB. For photographers who shoot in RAW (I had to Google what that meant: it’s not snapping away whilst naked, thankfully) having an external hard drive with a large storage capacity is essential.

Does it work?
Yes. The instructions were in the form of a few pictures, which was a bit disconcerting, but I can see why as there isn’t anything very complicated. Plug it into the computer using a USB port, download the software then click on ‘PC backup’. You have the option to backup continuously, set up a regular time or just backup as a snapshot there and then. Choices are given as to whether you want to backup specific files or the whole caboodle.

What else can it do?
If you download the Seagate App on your phone, you can back up your phone’s photos, videos and contacts via WiFi. I’ve had some success with this: it backed up my photos but then I think it lost WiFi signal so didn’t manage the videos. Will try again another day. It can also backup your Facebook and Flickr photos plus YouTube videos if you want your social media presence protected. And, quite frankly, who wouldn’t want that boozy weekend in Blackpool preserved for eternity.

Anything else worth knowing?

The Backup Plus Slim was sent to me by Seagate to review. All opinions are my own.