Home  >  Blog  >  A walk in the Lincolnshire Limewoods: lovely, though not quite Austria. 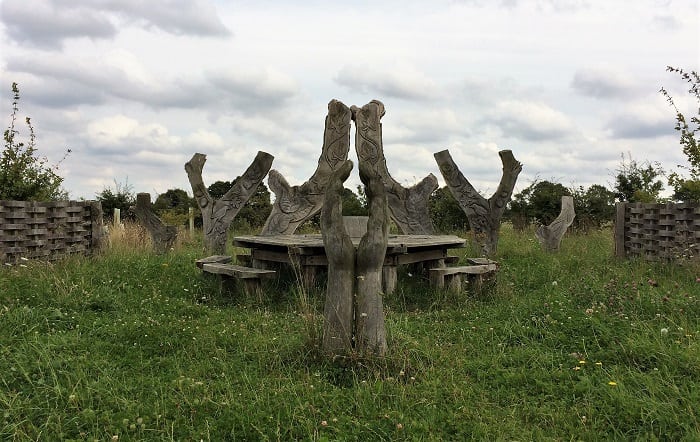 If you’ve been reading my blogs lately, you’ll realise I’m starting to enjoy walking. It no longer feels like a trial, to be endured until a coffee shop is reached. Maybe it’s an age thing. Once your children leave home you morph into a rambler, taking pleasure in windproof jackets and hidden pockets in rucksacks.

The joy of going for a walk has affected Dougie and me to such a degree, we’ve only gone and booked a proper walking holiday in Austria. I know! I need a lie down after typing that sentence. We’ll be heading off to the Austrian Lake District quite soon. The area is Salzkammergut, east of Salzburg. We’ve booked the trip with Inntravel, the company we chose for our brilliant holiday to Portugal earlier this year. This trip involves a week of walking, plus we’ve added on a couple of days in both Salzburg and Vienna, to give ourselves a city fix.

In preparation for our mountain hike we must practise, of course. This is more difficult than it sounds when you live in the Fens with no inclines for miles around. Replicating a strenuous alpine trek is probably best done by carrying the vacuum cleaner up and down your own staircase.

Our first walk, however, would have to be an easy one, as I’ve bought some proper walking boots and want to break them in gently. I know I’ve only recently bought the Tough Mudder trail runners for our Scottish trip, but I felt I needed something more substantial at this time of year.

After a bit of searching I found a walk on the Lincolnshire County Council website – Wragby and Goltho, a Lincolnshire Limewoods walk. The Lincolnshire Limewoods area lies between Wragby, Bardney and Woodhall Spa, 60 square miles of Britain’s largest concentration of woods containing small-leaved lime. Since 2005 this area has been protected, a number of organisations working together to improve access, research the history of the area and undertake conservation work.

Our walk began in the market town of Wragby which is ideal as it has a free car park in the centre and some public loos. What we hadn’t anticipated was arriving in the town on the same day as the Wragby Show and Country Fayre. As other visitors were heading for the fun of motorbike stunt teams and pedigree bulls, we were anticipating a trudge through the woods. It was a tough call but we stuck to our guns and plodded on.

I proved to be an excellent map-reader on the day, that geography degree coming in useful. I took note of directions and spotted the markers on the signposts, leading us into Cocklode and Great West Woods, owned by the Forestry Commission. 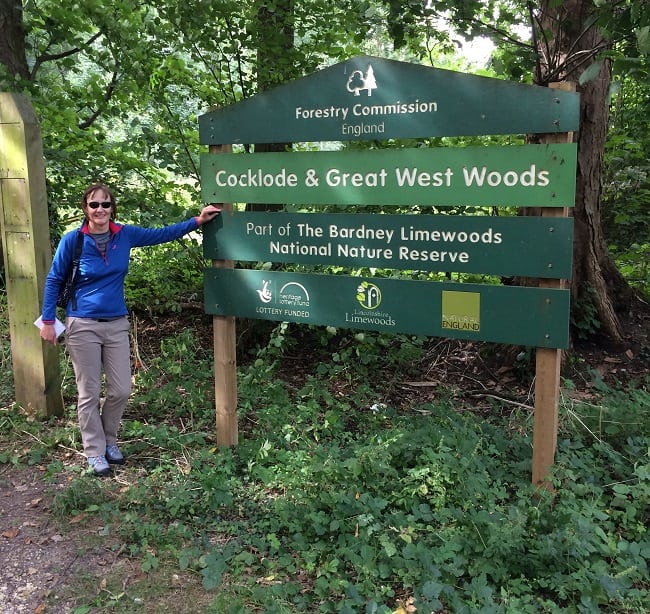 The route then took us to Goltho Wood. It’s here that the Woodland Trust have been planting new trees, including those which are part of their ‘dedicate a tree’ scheme. It’s a lovely idea to pay for a new tree to be planted as a gift or in remembrance of someone.

The walk was free of domestic arguments this time but there was a small disagreement at one point when Dougie opted for that time-honoured method of orienteering: just walk in the direction of the voices which can be heard from the Wragby Show tannoy.

A stickler for maps, I insisted we keep going along the directed paths, which was the right decision – of course. We reached the attractive picnic area and Dougie posed dutifully for photos in the sculptured hands. There’s also a wild play area in this part of the wood but we forgot to look for it, which is a pity, as I’d built up quite an appetite for a bit of wild play… 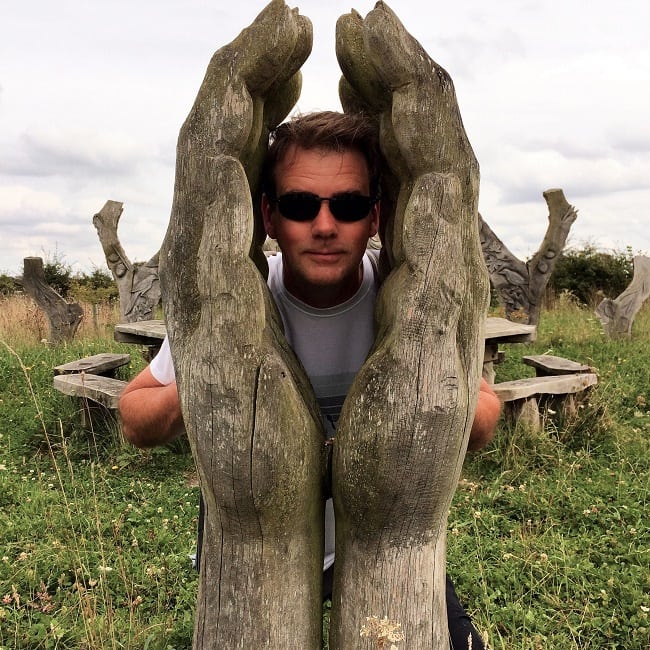 The final part of the route took us past St George’s chapel, the only surviving building on the site of the deserted medieval village of Goltho. The name Goltho sounds very unusual. It makes me think of something from The Lord of the Rings. It suffered from a number of disastrous harvests in the 14th century and eventually was abandoned. Unfortunately, the church experienced a devastating fire a few years ago so the building itself isn’t safe for the public to enter.

From here on, it was then an easy walk through the harvested fields and back to the town.

Here I am looking grumpy and windswept. I wasn’t actually grumpy but I was definitely windswept. 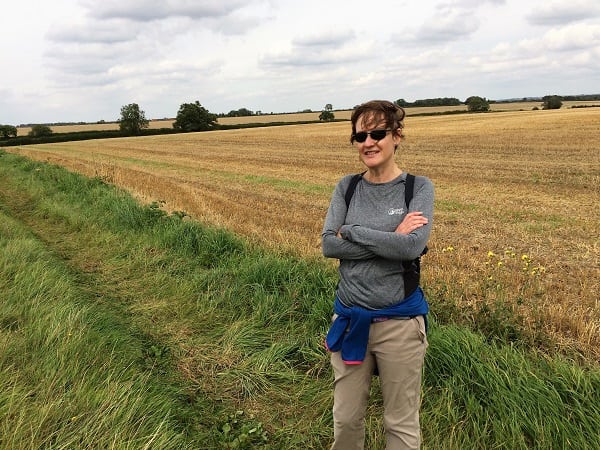 Two hours of gentle rambling in the fields and woodland of Lincolnshire: done. Bring on the Austrian mountains – it will be a breeze!