Mondrian London only opened last year but has certainly made its mark as one of the best hotels in the capital. Lets give it its full title: Mondrian London at Sea Containers. A bit of a mouthful but so named because it’s located in Sea Containers House, an well-known landmark on the river, next to the Oxo Tower.

I was searching for a last minute hotel for a brief weekend away and it popped up on TripAdvisor, along with a note that the hotel website was offering 25% off its rooms. I clicked, gawped and booked within minutes: it ticked all the boxes.

Arriving at King’s Cross, we took the circle line round to Blackfriars and could see the hotel as soon as we exited the station. A walk across the bridge and five minute later we were there. When you step inside the stunning design hits you and leaves you rather breathless. A huge copper-clad wall, inspired by the hull of a ship, stretches through the lobby from the outside. The rich colours and clever lighting make this huge space exciting yet welcoming. Tom Dixon, from Design Research Studio, has managed to retain the essence of the original building: despite the obvious contemporary features, the overriding feeling is one of history, of 1920s luxury cruising.

If the reception area resembles a busy ship’s booking hall, the corridors and bedrooms upstairs are a complete contrast. Thick carpets and excellent sound-proofing bring peace to guests as they come out of the lifts. We booked an entry level classic room and were impressed. The palette is one of cool grey, matt black and vivid pink. Ironed to within an inch of its life, the linen is crisp and brilliant white. Storage? Superb: a decent-sized wardrobe with a good number of hangers, cupboards, drawers plus shelves in the bathroom. May I also congratulate the thoughtful designer who placed an electrical socket next to a full-length mirror. A mini-bar which could be mistaken for an upmarket corner shop, such was the extent of its stock, was a revelation. How reassuring to have tea and coffee making facilities (i.e. a kettle)  and how very fancy to offer crystal glasses.

The bathroom was small (though not that small for London) but beautiful. A large walk-in shower, excellent Malin + Goetz toiletries and a classy black basin which, though gorgeous, must drive the chambermaids to distraction trying to keep the watermarks off it. 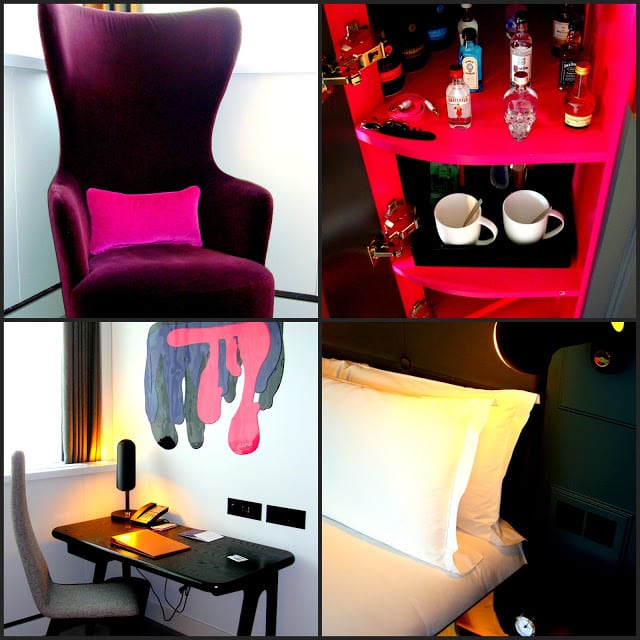 Sea Containers restaurant is a lively, relaxed space for breakfast. Choose from the buffet or select something to order such as buttermilk waffles or smashed avocado on toast. There are plenty of staff, always someone around with a smile and a welcome. I love their uniform – pale blue shirts, dark aprons and everyone wearing their own choice of Vans footwear.

Cocktails are a must in the Dandelyan Bar where award-winning mixologist Ryan Chetiyawardana, aka Mr Lyan, has created a dazzling collection of drinks, categorising them into pine, birch, oak and boozeless. I can recommend the birch-based ‘Bjork Can Sling’ (birch charcoal, birch beer ‘vermouth’, Aperol and cucumber soda). Dougie, sticking to his Scottish roots, plumped for the smoky ‘Heartwood Old-fashioned’ (Johnnie Walker Black Label, oak lactone syrup, Dandelyan resin bitters).

Its worth noting that although Dandelyan is a bar, there does seem to be a booking system and we were lucky to be able to walk in without a reservation. The same goes for the rooftop Rumpus Room, which we didn’t try, but this also requires a minimum spend as well as a reservation.

An evening meal at Sea Containers restaurant was, quite simply, superb. It’s not cheap but, oh my goodness, it is well worth it. We were going to skip starters but our waitress suggested blistered padron peppers and some bread to keep us going as our mains would take 25 minutes. The peppers were exceptional and the bread was delicious: a warm, rounded cob, divided up like a Terry’s Chocolate Orange.

We chose to share a double-cut heritage pork chop and, when it arrived, I thought it would feed an army. The meat was glistening and pale and unbelievably juicy, having been slow-cooked in a water bath. It came with crackling but not like any crackling I’ve ever had. This looked like someone had injected bubbles of air into a wafer-thin poppadom. Extraordinary.

Having shared the other courses, we did the same with dessert, choosing a tiramisu pud and two spoons: edible velvet in a glass bowl.

I have a worrying feeling that the very reasonable price we paid (£168 per room per night) might not last for long. Other hotels in the Morgan Group, such as The Sanderson in London, are much more expensive.

This hotel is cool, glamorous, stylish and sexy. Staff are bright, cheerful and attentive. The food is divine.