Home  >  Blog  >  A taster of Acorn Antiques, The Musical 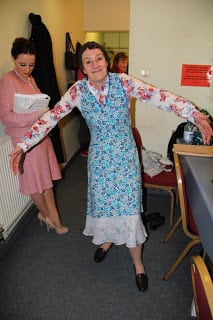 Mrs Overall recently took to the stage at the South Holland Centre, Spalding, with other members of the cast of SADOS’ Acorn Antiques as part of an evening of entertainment with the Rotary Club. We performed a 10 minute segment of the show which included a little bit of dialogue and my solo, Macaroons.

As you can see in the photo, I look bloody lovely in my pinny, flat granny shoes and hairnet. The things we do for our art, darling. Dougie and Rory were visibly shocked when they saw me dressed in this outfit but reassured me I looked the part.

Considering we don’t actually perform the full show until the middle of May, it was quite a risk to take a snippet of the play, which we have only really ‘blocked’ at the moment, and allow the public to see what we hope to offer in a couple of months time. We had no set, we couldn’t explain to the audience who the characters were and where exactly we were in the proceedings, but hopefully we gave them a flavour of what to expect in the real production.

Our director managed to video our performance from the balcony and I have a clip of part of it which includes my singing. From my point of view, it was a really useful thing to do. I can now see that I am not projecting my voice anywhere near as loud as it needs to be. I’m pleased with the song, though, and it’s reassuring to know I can get to the end of it without collapsing.

For anyone not familiar with Acorn Antiques, this was a sketch show written by Victoria Wood in the 1980s: a pastiche of poor soap operas, hence dodgy sets and props and rather obvious, stylised characters who miss lines and overact. It was made into a musical in 2005.

To set the scene for the video clip – we have Miss Babs and Miss Berta, owners of Acorn Antiques together with Mr Clifford and two young people on a ‘new government pitiful adolescent training scheme.’ They are joined by Mr Watkins and Derek, shoppers who have just been told the Countess of Manchesterford, who holds the lease on the shops, has sold the entire street to property developers…

The video below might not be visible on all devices. It’s on my Facebook page so if you want to see it there, I’m at https://www.facebook.com/trish.burgess