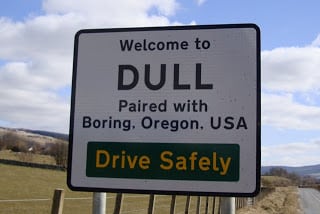 Do you remember when I was visiting Scotland at Easter I mentioned we had visited the little village of Dull which had recently been paired with the town of Boring in Oregon? (The link is here) It would seem another town of tedium wants to join the party.

The tourism committee of the shire of Bland, in New South Wales, Australia, want to forge links with the other towns whose names would suggest they were a dreary destination.

Bland was named after William Bland, the son of an obstetrician, who was transported as a convict to Van Diemen’s Land in 1814 after killing a sailor during a duel in Bombay. He was later pardoned and went on to found the Australian Medical Association. Bland by name but certainly not by nature.

August 9 has already been designated as Boring and Dull Day to commemorate the day the places were joined. Tony Lord, a local councillor from Bland Shire, wants to be part of this merry group: “I think over the years we’ve had our share of fun poked at us….we need to think positively and look ahead at all the opportunities that may occur or that we can generate.”

Now all we need is for three lawyers from each of the locations to join forces and the most perfect firm of solicitors will have been created.