“I’ve managed to book a week off around Easter,” husband announced last week.
“Great,” I replied, fingers poised over the keyboard ready to start browsing, “where do you fancy going?”
“Not sure, maybe somewhere warm for a change?”
“Ok, we’re talking end of March, beginning of April: too early for the Med. How about the Canaries?”
“We’ve done Tenerife a few times now. Last time it wasn’t that warm at Easter.”
“Maybe we were a bit unlucky. Lanzarote?”
“Lanzarote had a lot of dogs on the beaches…and it was windy.”
“Right, let’s not bother with the Canaries.”

“There are flights and hotels open in Cyprus?” I suggested.
“Hmm, Cyprus was great last time, but expensive with that hotel you booked. And it was nippy in April.”
“Egypt would be warm,” I offered.
“Everyone I know who’s been to Egypt comes back with diarrhoea,” replies Dr Dougie with conviction.
“Ok, Egypt’s off the list.”
“Actually I’m not sure I want to just lie on a beach anyway.”
“Ok. Let’s start again. Copenhagen was wonderful at Easter. Fancy a city break?”
“Yes, that’s a better idea.”
“Any criteria before I get started?”
“East Midlands or Stansted. Maybe Luton. Can’t be hassled travelling any further just for a short break.”
“I’ll search on Skyscanner, see where we can go.”
“Oh and I don’t want to have to get up at some ungodly hour.”
“Not at all picky are you! Skyscanner suggests we can go to Amsterdam, Budapest or Prague.”
“I think Rory would prefer going to Amsterdam with his mates in a year or two. The other two are possibilities.”
“I’ll check with my blogging friend, Libby. I know she’s been to Budapest and Prague”

Having emailed Libby, I am now armed with more information.
“Libby enjoyed both cities, her husband preferred Budapest.”
“Do you know, I’m wondering whether we should just stay in this country.”

“I’ve always wanted to go to Dorset: Lyme Regis…Durdle Door…Lulworth Cove.”
“No, we can’t go there,” says Rory as he saunters into the room and sprawls on the sofa.
“Why not?” I whined, those images of Meryl Streep and her Scottish Widows cape beginning to fade.
“That’s where I’m going for our Geography field trip later in April. You hadn’t forgotten, had you?”

I was becoming a little frustrated by now, so wandered off, muttering to myself. I picked up the pile of Christmas cards which were still on the coffee table, waiting for me to transcribe change of addresses, emails etc into my address book. Out popped a letter from one of my oldest friends, Marion. Marion and I met on our first day working for John Lewis, in Oxford Street, in 1985. I read the words “Yet another year and we haven’t managed to tie up. Would love to catch up with you all.” Perfect. Why hadn’t we thought of this before? Marion and her husband Henry now run a shop/delicatessen which is part of a the Mains of Taymouth Estate in Kenmore, Perthshire: luxury self-catering cottages and apartments on the edge of Loch Tay. The chance to have a few days in Scotland, stay with Mum on the way there and back, and connect with an old friend I haven’t seen for about 8 years. They have two boys, both teenagers, and I know Rory will enjoy meeting them again. 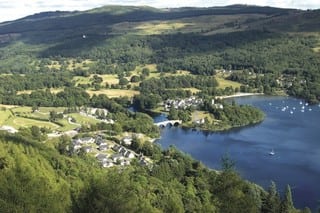