Home  >  Blog • Review  >  Taking a rest at The Cleveland Tontine

We must have driven past The Cleveland Tontine countless times on our way to and from Newcastle. There has always been something very appealing about this old coaching house which has been providing food and rest for travellers since the early 19th century. Last year we decided it was about time we make a stop on our journey north to experience some traditional hospitality on the edge of the North York Moors.

This boutique hotel and restaurant has a fascinating history. In 1804 the Yarm to Thirsk turnpike was opened, the demand for a resting place was created and so The Cleveland Tontine was built. But why the name? What is a tontine?

A tontine was a business arrangement whereby investors put money into a venture, receiving annual dividends. As members died, the shares were divided between remaining investors until the sole survivor inherited 100% of the shares. There were variations in the scheme but it was eventually deemed illegal, not least because of the increasing number of untimely deaths of some members.

The London to Sunderland mail coach used to stop here and it became a hugely popular resting place for travellers. When horse power declined and rail travel increased, the Tontine became a private home until the post-war car boom created a need once again for food and rooms in this part of the North East.

The hotel, with its long reputation for excellent food under the ownership of the McCoy brothers, is now owned by Charles and Angela Tompkins. Since taking over in 2013 they have put their own stamp on the place with a comprehensive refurbishment and it continues to delight locals and visitors to the area.

We made a last minute booking for a one night stay and arrived when lunch had already finished. However the staff were so accommodating, rustling up a Caesar salad for us which we ate in the lounge, with the daily papers to hand. This part of the hotel has a bright, colourful vibe with vivid royal blue seats and a striking Marilyn Monroe print on the wall which reflects the acres of rolling countryside scenery flooding in from the large picture window. 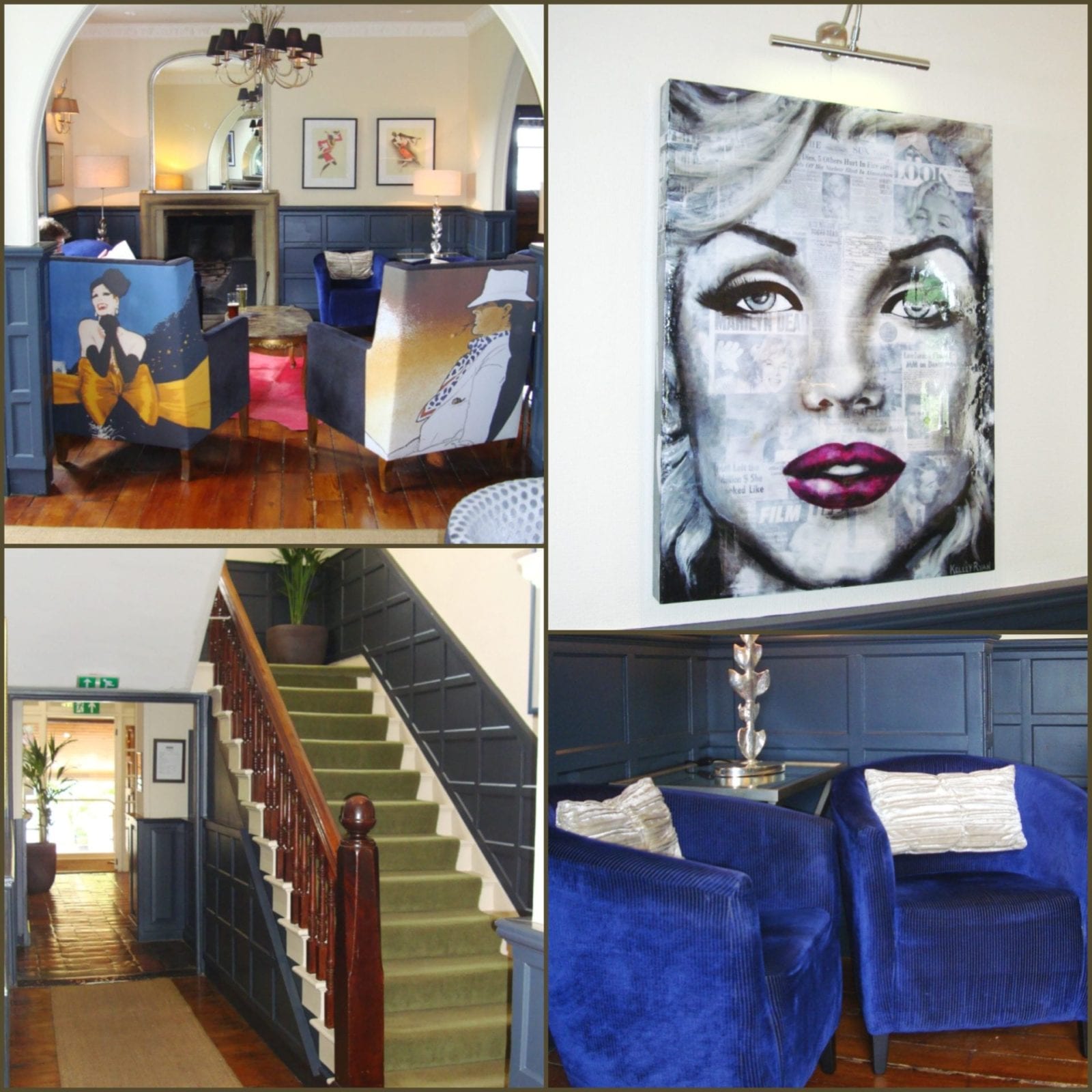 It’s also the perfect place for pre-dinner cocktails. For the record, we enjoyed a Champagne Tontine (Champagne, gin and Cointreau) plus Le Royale (Champagne with crème de framboise).

The restaurant is located down some stone steps and is a beautiful space, with a vaulted ceiling and a huge stone fireplace. The menu has changed since our stay but we dined on a Whitby crab and tomato trifle; pork fillet with celeriac and toffee apple and rose loin of veal with sweetbread tortellini. My pud could well be the best I have ever tasted: an Eton Mess soufflé with raspberry sorbet, the waiter injecting the soufflé at the table to fill it with the most delicious crème patisserie. Sensational.

We climbed the stairs to our bedroom, the Coach House, one of seven individually designed rooms. Ours was on two floors: stairs up from the bedroom led to the vast bathroom with its feature roll-top bath and the most wonderful views from the windows. The wallpaper, created by local designer, Deborah Bowness, might look a little oppressive in the photo but we loved it. The room was large and could take the bold design; it complemented the solid black furniture of the bed and ornate wardrobe. The gorgeous red leather chairs by yet another window certainly gave the room the wow factor.

Breakfast the next day in the morning room had a lovely old-fashioned air about it with the mismatched china cups and saucers and the cheerful, personal service from friendly, attentive staff.

We have driven past The Cleveland Tontine on a few more visits to my mum since last summer and each time I remember the hospitality, the views and the superb cuisine. We’ll be on the A19 again very soon, I’ve no doubt, so I think another rest stop is in order. If it’s good enough for the London to Sunderland mail coach, it’s good enough for me.