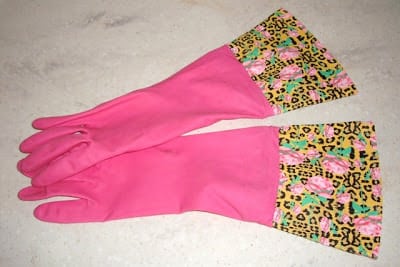 The theme for this week’s Gallery is ‘new’ and the photo above shows my new rubber gloves. Not any run of the mill rubber gloves, mind you. These were given to me last night as a gift from the director of our local production of Acorn Antiques, The Musical.


For those of you who didn’t catch my previous post, I’ve been fortunate enough to land the role of the infamous Mrs Overall in this amateur production which will be performed at the South Holland Centre, Spalding, in May. Mrs Overall was played by Julie Walters in the original sketches in Victoria Wood: As Seen On TV and also in the musical version. I have big shoes to fill, or rather, carpet slippers, a pinny, hairnet. and Marigolds.

New gloves for my new role which began last night with our first rehearsal. The script is a joy, the rest of the cast are fantastic and I think the next few months are going to be a blast.