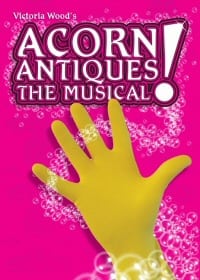 You might remember before Christmas I mentioned I would soon be auditioning for the next SADOS musical, Acorn Antiques? That day arrived yesterday: a whole day of auditions from 10am until 4pm. Crikey! Surely it couldn’t be any worse if we were auditioning in the West End?

I left the boys in bed while I packed my bag with spare shoes, drinks, a packed lunch and a bundle of nerves and headed off to a local school hall. The heating hadn’t been on since Friday so it was quite cold which meant a morning of singing and dancing was the ideal way to warm up. Some vocal exercises first with Craig, our Musical Director –  ‘your diaphragm will soon be your friend’ – followed by group singing of ‘Wouldn’t it be Loverly’ using different emotions. I was in the ‘angry’ group, shaking my fist at the sky as I railed against the lack of chocolate and enormous chair. My favourite group were the basses who had to sing the song as if they were French. So very ‘Allo ‘Allo.


Next up was our talented choreographer, Abi, who gave us a series of dance steps to accompany the ‘loverly’ song. There was plenty of character acting involved, a bit of tap, and, because Acorn Antiques is meant to be a spoof of poor quality soap operas, the opportunity to exaggerate and ham it up a bit. We all seemed to enjoy it and I decided early on to make sure my face was playing a part even if my feet were doing something completely different to the choreography.

A break for lunch before the specific auditions for each part in the show. This took quite some time as many people didn’t really know which parts they fancied, so there was about half a dozen people trying out for each character. I decided to audition for Miss Babs, Miss Berta and Mrs Overall with Mrs O being my first choice. The first two auditions went well but I was pleased that the audition piece for Mrs O included one of my favourite lines from the show:

“Well. Somebody offered her a cocktail. Next thing you know she’s headed for Bermuda with a trunk full of provocative scanties. If she’d stuck to a lattice jam tartlet and a Vimto, all this could have been avoided”.


I must have done something right as I’m pleased to tell you that I was offered the part of Mrs Overall. I’m so delighted and can’t wait to get started…tomorrow, in fact, is our first rehearsal. I have a few months to learn my part before we take it to the South Holland Centre theatre in Spalding in May.

Came home to tell the boys my news and Rory was pleased I wouldn’t be embarrassing him this year by going on stage in my underwear as in other years. No, this year I will be wearing thick tights, flat shoes, a pinny (apron) and a hairnet. I’m meant to be playing a cleaner, aged 60 +