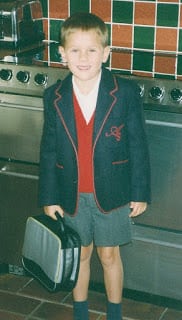 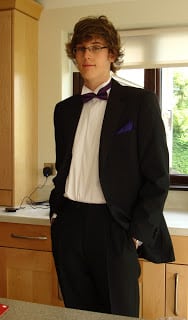 The end of an era? The little boy on the left starting his reception class with a big smile and a neat uniform. The young man on the right, at the end of Year 11, aged 16, with a wry smile, a smart dinner suit, hands in his pockets…and a lot more hair. And look, old kitchen and new kitchen!

Last night was Prom night and, for most young people in the UK now, this has become a big event. It’s at times like this I’m glad I have a son, as the expense was purely hiring the dinner suit. Talking to mums of girls, the costs can spiral with frocks, hair-dos, shoes, make-up and jewellery, for what is, as Rory said this morning, “a hyped up school disco”. 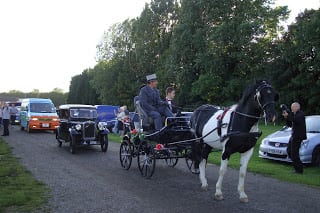 Rory’s Prom is a joint event in Spalding for the four main secondary schools in the town. Rory thankfully wanted little fuss: no limo or quirky means of transport. Can we just drop him and his mates near the entrance and he can walk in? Well we nearly ended up in the procession and quickly managed to turn off and park, which was just as well as Dougie wasn’t dressed as a chauffeur and the car wasn’t exactly showroom clean. So we parked up, the boys tipped out, and we watched the procession. Limos, sports cars, old buses, scooters, a Hell’s Angels type entourage, a shopping trolley, tractors, horse and carriage and the Mystery Machine complete with Scooby-Doo in the front seat. It must have taken about an hour and a half for all the vehicles to drive into the venue, drop off, photos, then off again.

A few hours at the prom and a quick change for the ‘after-prom party’. More worry as my son and his friends assured me they were ‘on the list’ for a huge party at a friend-of-a-friend. Two very tolerant, some might say crazy parents, had set up marquees and a band for an all-nighter.

My son eventually returned home at 8am; picked up by his friend’s mum who offered to do that part of the taxi service. We had experienced torrential rain all day until about 5pm last night when the gods were kind and offered us some sun, but of course it was soaking wet underfoot, so Rory came home caked in mud. A shower, quick breakfast and bed, where, at 1pm now, he remains.

My baby is safe and sleeping and I can breathe a sigh of relief. 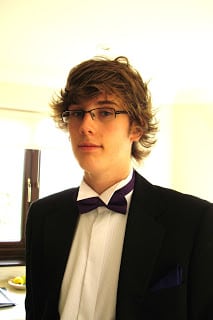