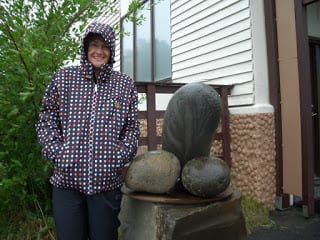 I had to smile over my morning cuppa today when I turned to the back page of the News Review of the Sunday Times. Iceland’s Phallological Museum, which we visited in 2007, has, at long last, secured a human exhibit for its impressive collection.

Local man, Pall Arason, aged 95, had donated his precious member to friend and curator of the museum Sigurdur Hjartarson. Pall died in January so his penis will now take pride of place in the museum. Up until this year the only human specimens were the foreskin from a 40 year old Icelander and the testicles from a 55 year old Icelander: that must have taken some balls.

The visit to the museum in Husavik was one of the highlights of our trip to Iceland. You can read about it here. Rory was still young enough not to be too embarrassed, Dougie felt emasculated by the impressive size of the bolt-upright whale selection and I pointed and giggled a lot.

We read at the time that a few generous chaps had already bequeathed their members but had not yet died so there was a bit of a race on to see whose willy would win the day. 95 year old Pall was the natural front-runner, although I was secretly hoping “Elmo” the treasured todger of American Stan Underwood, would beat him by a head. Stan had already provided the museum with a cast of his penis and had suggested his wife would look after it for a while after he died, before it was donated to the museum. Stan was in his fifties, however, so Elmo was always likely to be attached for a little longer than his Icelandic competitor.

I feel a little sorry for Stan that he didn’t win the coveted first prize but there’s no shame in coming second: in fact it’s something most penises would be proud of………isn’t that right, Elmo?