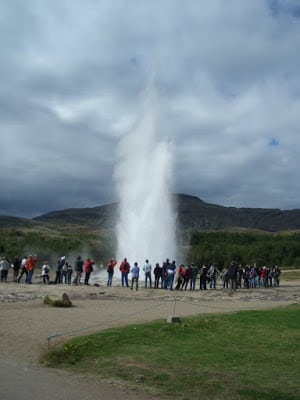 Strokkur blows its top…
Iceland’s big tourist attraction is the Golden Circle, a tour of three spectacular natural phenomena that are the must-sees of any tourist visiting the country. We were meant to do this on Day Three but we threw caution to the wind that day and altered our pre-set itinerary so we could visit Reykjavik. So, having seen a great deal of what Iceland has to offer, we are most probably saving the best till last.We have seen some stunning waterfalls on this holiday but Gullfoss is the most famous because it drops in two stages down a deep gorge. On this beautiful day (the temperature reaches 18 degrees), it is quite breathtaking. It’s a busy spot, plenty of tour buses here but, honestly, nowhere in Iceland gets really hectic to the extent that it spoils the scenery. The Icelandic authorities seem to have a clever knack of making their tourist spots accessible, safe and comfortable but the end result is never tacky. Mind you the souvenir shops have a mad assortment of goodies to take home. We have resisted most of the tat so far, but the sun seems to have affected our judgement today so son buys himself a fridge magnet and a troll, hubby buys some “ice cubes” made out of Icelandic rock so that his night-time tot of whisky doesn’t get diluted and I buy a striped woolly hat! The Icelandic wool, though very good quality, is itchy as hell, so I choose a hat with a fleece lining. Heaven knows if I will ever wear it as it has little dangly bits to cover my ears but hubby assures me I look very sweet, in a Deputy Dawg sort of way!A couple of miles further on are the geysers at Geysir! Geysir itself no longer spouts regularly but its neighbour, Strokkur, is very accommodating to visitors, shooting forth every 3 to 5 minutes. We sit watching the hot water bubble furiously then arch into one big bubble before shooting boiling steam some 30m into the air. I could sit here all day watching it perform, particularly as the sun is so warm: it makes the whole scene so much more appealing.

The last of the three big guns is Thingvellir. There is a fault line here where the geological plates of North America and Europe are pulling slowly apart. We’re not entirely sure where the actual centre line is in this vast plain but we pretend we have our feet in different continents as we explore this national park. I’m starting to get all geological on the family again, this time extolling the awesome power of nature and blabbing on about the Mid-Atlantic Ridge, earthquakes and the like. Husband raises his eyebrows on occasions as the accuracy of my narrative is questionable, I must admit. This is also the place where Iceland formed the world’s first parliamentary democracy, the Althing, in AD930. Husband takes over the narrative now, spouting forth like Strokkur itself, but with a great deal more knowledge than my own efforts.

Just before we leave I remember it says in my guidebook that one of the fissures of clear water here has become an oracle, coins gleaming at the bottom. Ask your question as your coin falls and if you can see it land on the bottom, the answer is “yes”. Son is given plenty of low value Krona to throw merrily off the bridge and seems to ask a succession of questions regarding Newcastle United’s chances in the new season. Unfortunately he doesn’t see them land on the river bed, so it looks like it’s Man U at the top again!