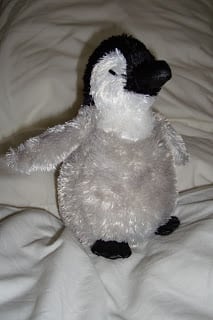 My husband seems to like penguins. Two years in a row he’s bought virtually identical penguin-based Christmas cards. Knowing he’s a softie, like me, and can’t resist teddies and suchlike, I bought him a cuddly penguin for Christmas so he could have one for himself.

We sat up in bed cooing over the new addition to the family and decided to name him.
“Peter the Penguin?” I suggested
“No, not keen,” replied Dougie, becoming quite possessive of the little chap.
“Paul?”
“No.”
“Paddy?”
“No? For God’s sake, does it have to begin with bloody P?”
“Pingu began with P.”
“He’s not Pingu. What was the name of the penguin in Happy Feet?”
“Dunno, didn’t see the film. Wasn’t it just ‘Happy Feet’?”
“Not calling him that.”
“Ok, how about Ant?”
“Ant? As in Ant and Dec?”
“No, Ant as in Antarctic”
“Hmm, not sure.”
“No, me neither, he doesn’t look like an Ant.”
“No, he doesn’t, he looks like a penguin.” …cue roars of laughter from Dougie.
“How about David, as in Attenborough?”
“No, I’m thinking Orville.”
“Like Keith Harris’ duck?”
“Well he couldn’t fly either.”
“Orville Wright could.”
“That’s true.”
“What was his brother called?”
“Wilbur”
“How about Wilbur?”
“Yeah, he looks like a Wilbur. Perfect. Wilbur it is.”