This photo shows where our old boiler used to live. It lives here no longer. There wasn’t anything wrong with it, as such, but it was elderly, creaking, probably not very green and, with a new kitchen on its way in a few weeks time, it was time to say goodbye.

It used to live in the utility room but our new-fangled, huge beast of a German boiler, shiny and bursting with youth, has taken up residence in the airing cupboard in the bathroom. Don’t ask why it’s there. It’s some new type of boiler that “works from a direct water feed and pressure”. I’ve put that in quotation marks as I have no idea what it means. All I know is that the water tanks have been removed from the loft and the tank in the airing cupboard has also gone awol.

They started work yesterday. It took four chaps to hoist the new boiler up the stairs. It only dawned on me at this late stage that it might be an idea to remove pictures in the stairwell. I have a collection of James Dowd prints of children, all carefully arranged in what I believe to be an artful manner. So what did I do? Took them all off their hooks, all 15 of them, without first taking a photograph of where they were positioned. Just great. I have taken a photograph of them now, on the floor, so you can see what a fun job I will have later today. 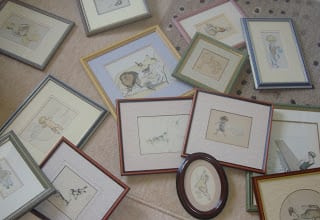 We had to suffer the frustration of no heat or hot water last night and this morning, which necessitated the boiled kettle, basin and trusty flannel routine. I usually wash my hair every day so am sitting here feeling decidedly scummy and waiting for the men to bugger off later so I can have a decent shower.

Thank God it’s sunny today so I can sit in the window and get some heat on my back. Yesterday we were lucky with the weather too but I decided to escape to Tesco for a while, wheeling my trolley up and down the aisles until I’d warmed my bones up a tad. In the evening we put some logs on the fire and it was all very dib-dib-dib cosy, singing Kum-ba-Yah and toasting marshmallows. I lie. We had a bottle of Pinot Noir, Kettle Chips and watched another episode of our box set of Six Feet Under.