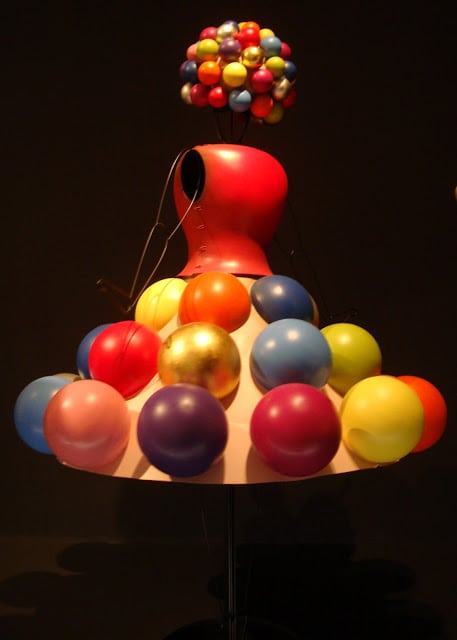 A forbidden photo taken in Madrid, last October, in the Museo Reina Sofia. I say forbidden because just after I’d clicked the shutter, a sour-faced woman told me I wasn’t allowed to photograph this particular exhibit. Of course I apologised but I still had my snap.

It was rather a confusing museum: no photos allowed in some parts, photos but no flash elsewhere. Then there was the bizarre rule for their prime exhibit, Picasso’s Guernica – photos allowed but only from the room next door: people were squashed in the archway fighting to get a good shot.

So what is this delightful creation with multi-coloured dress and head made from shiny spheres?

It’s a ballet costume designed by Oskar Schlemmer, a German painter, designer and choreographer associated with the Bauhaus school. It is part of his most famous work, “Triadisches Ballett,” 1922, in which the actors were morphed into geometrical shapes and danced like puppets. This particular costume translates well into English as “Ball Gown”.

The other costumes on show were equally quirky, reminiscent of Bertie Bassett liquorice figures. Shame I couldn’t get a photo of all of the costumes, but I was quick to move to the next room before my camera was confiscated. However I have found the other exhibits on the museum’s website.

I’ve also discovered a very old clip of part of the ballet on YouTube. The costume above can be seen at 1 minute 53. You’ll notice the head was actually a head-piece, worn like a wig. The whole thing looked very heavy and cumbersome but is quite gorgeous, don’t you think?

This is my entry for this week’s Gallery , the theme being ‘shapes’.
&nbsp