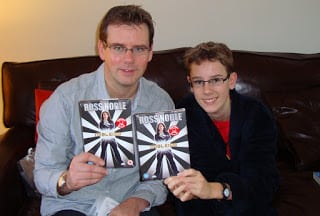 My Boys – with matching dvds
Christmas Eve, nearly midnight, and my son Rory had decided not to go to sleep. I’m sure this was a familiar scene across the globe but in this case it wasn’t because he wanted to see Santa: rather, at 13, he wanted to stay on Facebook so he could be first to update his status on Christmas Day. I gave up. Husband Dougie was exhausted from a busy day at work so it was left to me to play bloomin’ Santa, clomping up and down the stairs then artfully arranging the piles of gifts. My pile was significantly smaller than the other two so I harrumphed a bit more and set off for bed.
The next morning I woke up excited and wanted to know if Santa had been, even though I knew the answer to this one. Son was still in a deep sleep so Dougie and I showered and dressed then ran into his room at 9am shouting “It’s Christmas…wake up…let’s see if Santa’s been”. Rory was not best pleased to be woken at such an early hour and chastised us, “It’s still a bit early but okay, if you insist, just give me a minute”.
The presents were a success – even my little pile included some lovely jewellery, so I couldn’t complain. The prize however, for the most pointless present of the day, went to a fitness gadget called a Powerball that Dougie received from his partner at work. The idea is to rotate the ball quickly in the palm of your hand. I’m sorry but what man on earth really needs a mechanical aid to improve his wrist action?! Dougie spent the rest of the day rhythmically shaking his arm up and down, startling his mother and ended the day with an improvement of his tennis elbow but acute tendonitis of his forearm. What a w**ker!
The highlight of the day was the turkey dinner. Dougie had been given two huge turkey breasts from a grateful patient and, as each of them weighed 5lbs, and there were only five of us for dinner, we froze one half and cooked the other. A lack of preparation on my part meant a frantic search on the internet as to the best way to cook one massive breast. In the end, hubby got creative, shoved butter and orange slices under the skin and we cooked it for two hours. It was fantastic – so moist and no fannying about with legs and other bones. Just slice after slice of perfect white meat. Quite a difference from my culinary disaster the day before with Nigella’s chocolate pistachio fudge. I used evaporated milk instead of condensed and wondered why it looked a bit runny as it went into the fridge. The fates were on my side, however, as it set into a fondant-textured pudding, reminiscent of a “Gu Pot au Chocolat”. Nothing like fudge but bloody lovely all the same. 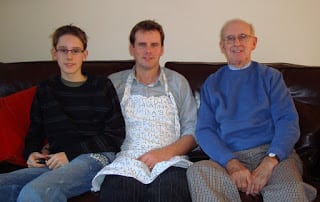 The Burgess Boys – Rory, Dougie and George.
After dinner you will be pleased to learn we had another round of arthritic charades with the inlaws. They had forgotten the rules from last year so every time one of us wiggled our ear to do “sounds like”, dear old George kept shouting “Hear…listen…lobe”. Along with arthritic fingers, making the deduction of number of words nigh-on impossible, we had the inability to see the small writing on the card. Lovely Emily, on her turn, would have to go into the corner to stand under the reading light. By the time she came back to perform her charade, she inevitably forgot what it was. But it was teenage son who had the classic mime of the evening. I will never forget choking on my sweet sherry as he took to the floor and proceeded to shake his head in the negative and then thrust his hips to and fro in an obvious sexual way. Emily thought he might be skiiing but his father and I knew better and before the act got even more creative I “gave up” and he said the card he’d been given was The Virgin Queen. “So I was shaking my head to say No”, he explained, “then I was doing sex. No sex because she was a virgin”. Another mince pie anyone?
We quickly moved on to Family Fortunes, finding the top five answers to taxing questions such as “Things coloured red” where we had answers such as “a carrot” and my favourite, “Different types of jacket”, when we’d exhausted “dinner”, “life” and “strait”, Emily leapt in with “potato”.
The evening ended with mother-in-law smiling at her grandson and saying “You’re really coming out of your shell now”. Son, affronted, retorted, “what do you mean, coming out, I’M NOT GAY”.
I’ll get the coats.