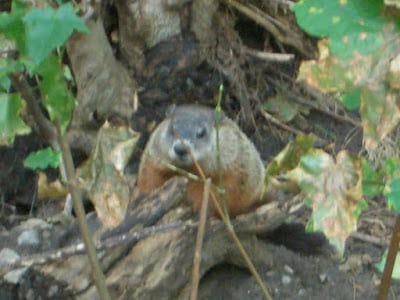 Who’s this little fella?
This morning we try and get up a little earlier to catch the Changing of the Guard ceremony on Parliament Hill. Can’t imagine I’d bust a gut to see this if I were in London, but somehow it seems more exciting in a foreign country. It takes place at 10am so we are grabbing a very quick breakfast at 9.30am when, in the distance, through the window, I see the pipes and drums marching past the hotel. How annoying! If only we’d waited, we could have just stood at the front door of the hotel, or even hung out of the bedroom window to see the spectacle. And now, toast in hand, we’ve missed it. To add to our irritation, by 10.30 we’re out in Ottawa, walking towards the river, when we hear the pipes somewhere behind us. Of course, the soldiers were marching back again, past the hotel we’ve just left. So we’ve missed them twice!
I really like this city, so clean, loads of drinking fountains everywhere, easy to walk along the river without having to dodge the traffic. We walk over the river which takes us from the English city of Ottawa to the French city of Gatineau, the border between the states of Ontario and Quebec. Spend the rest of the morning at the Museum of Civilisation in Gatineau, only because we have free tickets for it as part of our fly-drive package. The museum is fantastic, a beautiful building itself and plenty of loos on every floor, all sparkling clean. That’s how a museum should be! We learn all about the history of Canada from the first settlers and whereas in other museums there’s a tendency to glaze over after a while, this place was spot-on with how to amuse all ages.
On the way back over the river we keep seeing little furry animals popping out of holes near the river bank and along the canal. They must be just over 2 ft long with reddish brown fur and quite chubby. We sit at a cafe by the canal trying to decide what they are. In the end I pluck up the courage and go inside to ask the cashier.
“Can you tell me what the little furry animals are outside?”
“Sure”, he replies, “They’re groundhogs”
“Like in the film, Groundhog Day?”
“Yup, that’s right, we have hundreds of them round here”.
Very excited when I return to the boys and tell them. I remember that film really well: Bill Murray gets stuck in time during Groundhog Day and has to replay the day over and over again. Dougie dares me to go back into the cafe and repeat the question:”Can you tell me what the little furry animals are outside?”. I’m so tempted but it probably wouldn’t be half so funny to him as we think it is.
By chance in the evening there is a special event happening in the gardens around the Parliament buildings. It’s a bit like the Edinburgh Military tattoo and anyone can just come along and watch. Dougie gets all tingly when he hears the pipes and sees all the kilts swirling and I, as a former Highland Dancer as a child (yes I kept that one quiet!), find the music very stirring. As the sun sets we’re treated to the whole works including the 1812 overture with canons. Can’t quite believe we’re on holiday in Canada and not in Dougie’s home town of Edinburgh. Top Day!
August 2008