Home  >  Blog  >  Humpty Dumpty sat on a wall in Yorkshire

Humpty Dumpty sat on a wall

Humpty Dumpty had a great fall

All the king’s horses

And all the king’s men 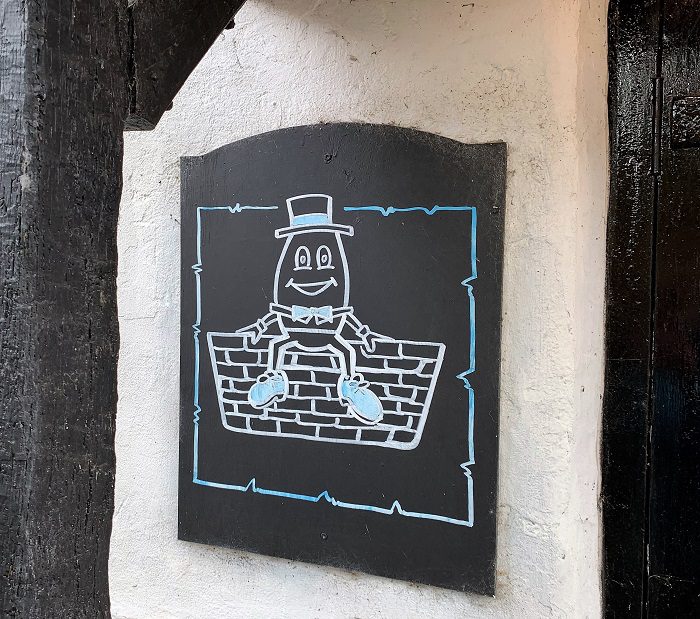 We all know the nursery rhyme of egg-shaped Humpty and his unfortunate accident but what is the real meaning of the rhyme? A quick Google search will give you numerous ideas from Humpty Dumpty being a drink of brandy and ale, or just slang for a clumsy person. There’s a theory that HD is King Richard III, depicted as humpbacked and defeated at Bosworth Field in 1485.

If you’re just south of York, in the village of Cawood, you’ll probably plump for the idea suggested in Punch in 1842 that the rhyme is a metaphor for the downfall of Cardinal Wolsey. Wolsey, confidant of Henry VIII, failed to secure the king’s annulment of his marriage to Catherine of Aragon. He was stripped of his government office and his residence of Hampton Court in 1529 but was permitted to remain Archbishop of York. He was arrested while staying at Cawood Castle, accused of treason and ordered to return to London. Unfortunately he fell ill on the journey and died at Leicester before being buried in Leicester Abbey. Punch also mentioned that just as Wolsey wasn’t buried in his intended tomb (a magnificent edifice in Windsor), Humpty Dumpty wasn’t buried in his shell. 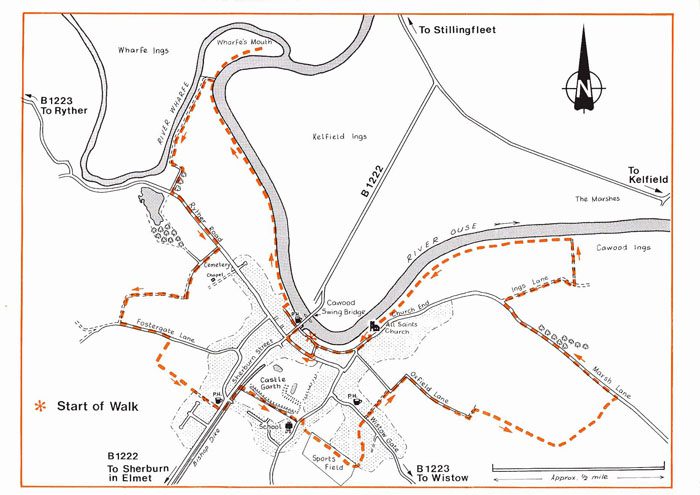 Now this is all very interesting but where am I going with it? On a recent break in Yorkshire, Dougie and I stayed very near Cawood and decided to try the Wolsey Walk which starts and ends in the village. The walk, which follows the River Ouse to the confluence with the River Wharf, is an easy 8km (5 mile) saunter on minor roads, farm tracks and riverside paths. It officially starts in Cawood but as we were staying in the neighbouring village of Kelfield, we began the walk there and joined the official route after a pleasant amble along the north bank of the river Ouse. 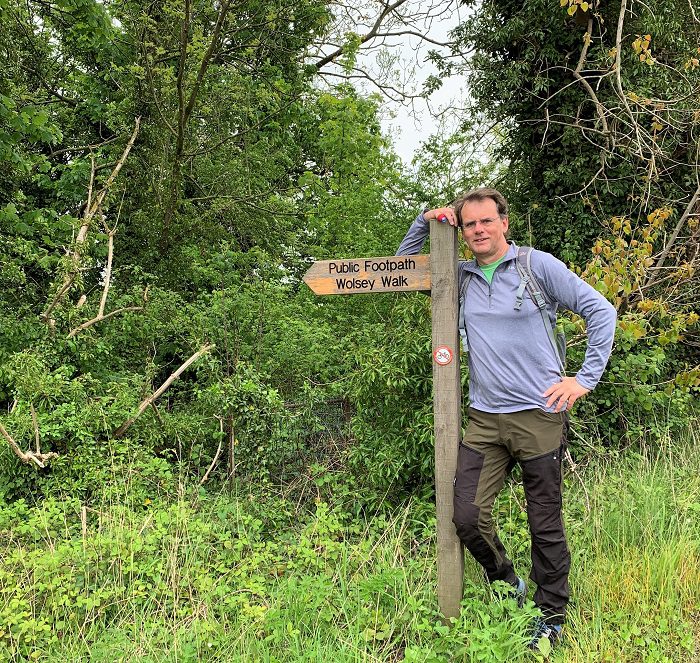 The first link to Humpty Dumpty was the tenuous suggestion that our ovoid friend fell off a very old limestone wall which could well have been the original perimeter of the castle. The next reference we saw was a chalk drawing of Humpty on the outside of the 16th century Ferry Inn ( see photo above). It was still a bit early for a pint, so we strode on along the river towards the confluence of the Ouse and Wharf rivers. As usual, we didn’t quite follow the directions or map properly, ending up too far into a farmer’s field and having to edge our way around it, for fear of treading all over the crops.

Where did we eat?

Heading back to the village, we abandoned the route altogether. It was raining and it was lunch time so we hunted out the Castle Inn and filled our faces with chicken pie and chips. By the time we were leaving, the rain was heavier and Dougie thought having our phones in the rucksacks wasn’t quite good enough to protect them. As I hunted for a plastic bag, Dougie pulled out a pair of surgical gloves.

“Do you always bring those when we’re on a walk?” I queried.

“Well you never know when they might come in useful” he replied. I’m not sure what sort of intimate examinations my retired GP husband thought he was going to have to perform in the middle of the countryside but I smiled, shook my head, and put my mobile phone in a sandwich bag. I watched as the Doc squeezed his phone into the glove until it resembled a steam-rollered cows udder.

We had a few options for the remainder of the day. There were parts of the Wolsey Walk we still hadn’t tackled but the weather was grim. A happy compromise was to have a look around Castle Garth, a protected area in the middle of Cawood inhabited by the Great Crested Newt. We then hunted out The Pickled Postie, a one-stop-shop in the village made up of a cafe, deli, general store and Post Office. Highlights were the lampshades covered in tiny postage stamps and the loo where you can they’ve decorated the walls with old invoices.

I could have spent all afternoon here: supping cappucinos, wolfing down exquisite cakes and listening in on conversations as people popped in to this wonderful hub. Such a lovely place with charming, accommodating staff. One chap missed his bus so he came inside to wait for the next one. He was offered a bacon sandwich – the cook was about to go home but she rustled one up for him before she left.

The sun peeped out as we headed home along, stopping briefly at a small metal bench designed as a Viking longboat – which, of course, Dougie had to straddle and pretend he was Erik the Red. More like Dougie the Daft!

Where did we stay?

Ten miles south of York, in the little village of Kelfield, are Dovecote Barns. If you’re looking for five star self-catering accommodation, I’d highly recommend taking a look. There are four barns, sleeping from 2 to 8 people. We stayed in The Dovecote, a two-bedroomed cottage which still features some of the original nesting holes in the stairway. Beautifully appointed, with a pretty, spacious kitchen and cosy living area, it was perfect for a luxurious, relaxing break. We loved the location for an easy trip into York and, for the Wolsey Walk, it was ideal – just yards from the river leading into Cawood.

Whether the Humpty Dumpty rhyme has any real connection with Cardinal Wolsey or this part of Yorkshire is anybody’s guess. But I’d like to think before he was arrested at Cawood Castle, Wolsey might have been inclined to have a leisurely saunter around the village as we did. I’m sure he would have found a suitable container for his mobile phone…. 😉