Home  >  Blog  >  River cruising revolution with U by Uniworld 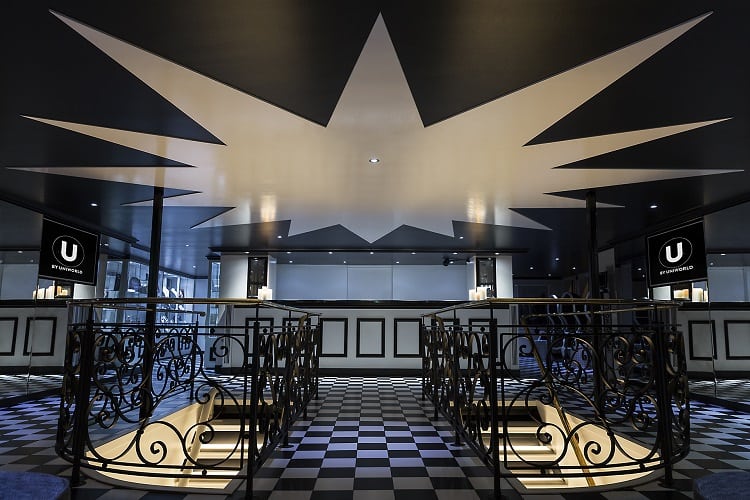 There’s a quiet revolution happening in the river cruising sector. Whereas ocean cruising has attracted a much younger clientele over recent years, river cruising has found it hard to shake off its traditional, genteel image. Surprisingly, it’s Uniworld, known for its glamorous, ostentatious styling, which has chucked out the chintz as well as the rule book with its new U by Uniworld cruises.

When we sampled the river cruising scene with Emerald Waterways in 2015, we sensed that change was afoot. The ship had a smart, contemporary feel and the package on offer was moving towards more active experiences onshore. But, aged 51 at the time, we were probably the youngest on board, except for two shell-shocked teenage boys, tagging along on the city tours as if they’d stumbled upon a jolly pensioners’ day out.

But we had a blast on that holiday. Our fellow passengers might have been mature in age but they were young at heart and full of mischief, scoping out the best wine bars in the cities when it became too warm for sightseeing. River cruising is a fantastic way to see the world. Why shouldn’t younger travellers experience the joy of disembarking in the very centre of Cologne or have the freedom to explore Amsterdam at night, hopping back on board when the fancy takes you.

U by Uniworld is geared to adults aged 18 upwards who are seeking a more adventurous experience on their river cruise. They are tempting younger passengers with a range of exciting, innovative ideas to put a bit of spice into the schedule. Which is why, when fellow travel blogger, Gretta, from Mums Do Travel, happened to mention the U by Uniworld cruises, I decided to book one. Yes, Dougie and I are off to France in a few months. We’ll be on the neatly-named ship, The B, travelling along the Seine from Paris to Honfleur and back to Paris. Its sister ship, not surprisingly called The A, will be taking passengers on the Rhine, Main and Danube rivers.

Enough of the preamble. I’ve teased you enough. What’s different about U by Uniworld?

They’re black. Sleek, sensual vessels, gliding along the European rivers like very chilled torpedoes. The floating, boutique hotels cater for up to 120 passengers. Compare that sweet little number to the 5000 capacity of some ocean cruise ships and you’ll see we’re talking intimate. 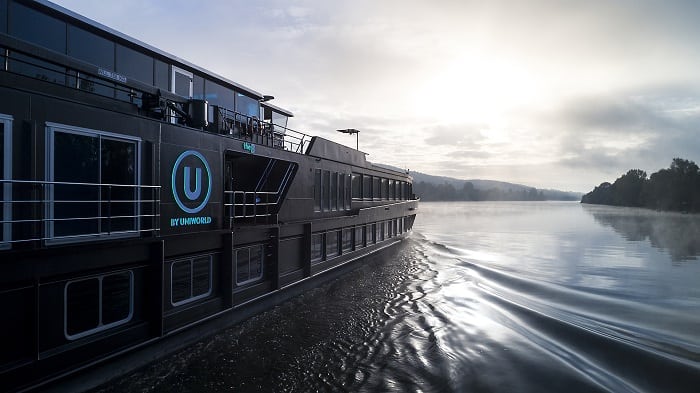 The interior design still has Uniworld glitz but it’s pared down, featuring geometric patterns in black and white with flashes of bright red. It’s a clean, chic look, designed to emulate a hip city hotel. The studios, balcony rooms or more spacious suites (see image below) all, naturally, have river views and there are two studio triple rooms, for friends who want to cosy up together. Solo travellers can take advantage of single rooms or special room share rates. Flat screen TVs, built-in Bluetooth speakers, Savoir mattresses and organic BeeKind toiletries are standard in all rooms. Plus free WiFi. 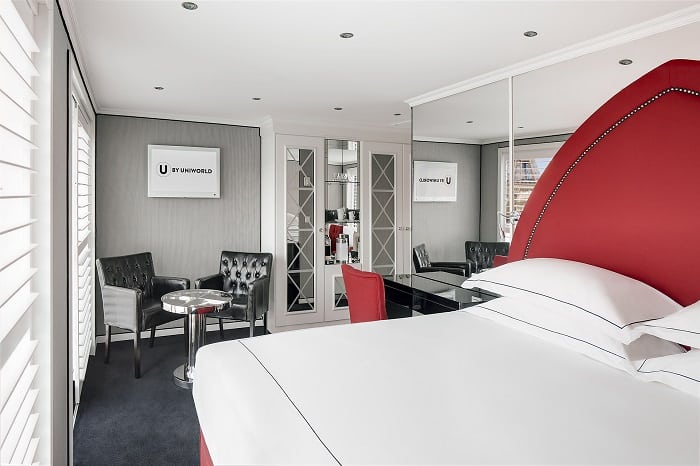 The top deck is cleverly designed with padded bench seating around the sides, making this a very congenial open-air hangout. There’s a funky ice bar up here too, with retractable walls which can gently disappear when going under low bridges. The upper deck features the lounge, bar and shop whilst the lower deck is home to a spa, gym and the dining room. 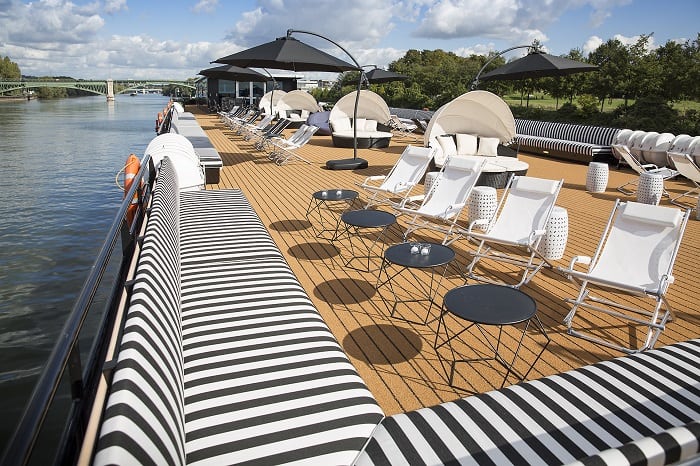 The Food and Drink

The restaurant is designed with communal tables – large and small – for brunch and dinner each day. The U lounge, upstairs, is always open, serving tapas and sharing plates. What will we be eating? Farm-to-table dishes, vegetarian and vegan options: Bea Tollman͛’s Spaghetti Pomodoro, U by Quinoa Burgers and Miso Marinated Wild Salmon. And if there’s isn’t smashed avocado somewhere on the menu, something’s seriously wrong. 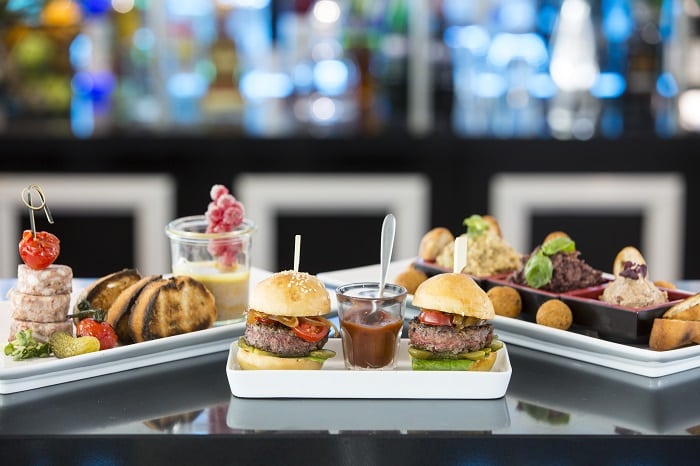 Complimentary water, tea and coffee is available 24/7, plus juice at breakfast/brunch. Later in the evening I’ll be heading to the bar for cocktails or a craft beer or two. 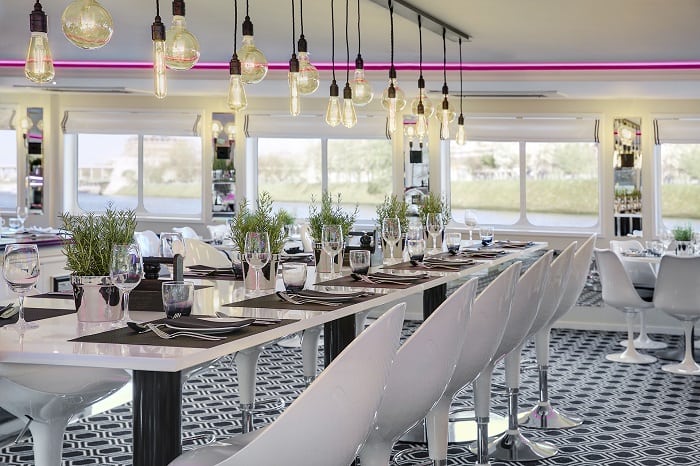 The activities on board

In order to reduce waste there are no traditional paper daily itineraries. Technology is the way forward with WhatsApp and email for internal communication with guests. Menus are displayed on screens in the bar and restaurant. There’s also a Press Reader app for guests to receive news on board. 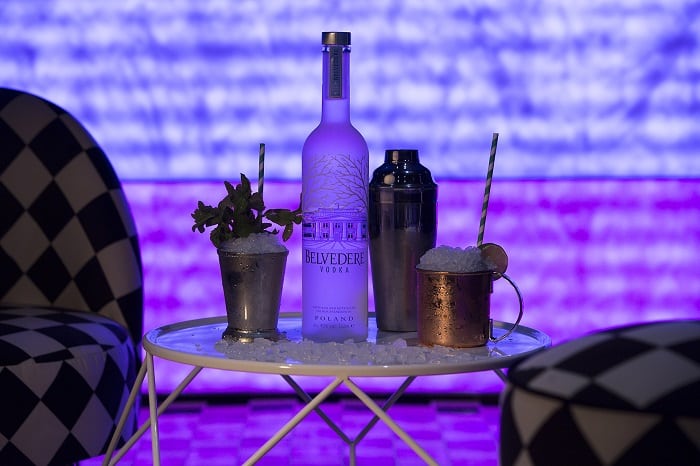 Mixology, painting and wine classes, rooftop yoga, silent discos, international DJs – do these activities float your boat? Or you can make use of the 50 bikes if you really must leave the ship. And yes, you must, as U are providing some very enlightened options. If you think an excursion involves following someone with a loud voice and an umbrella, think again…

The itinerary and activities onshore

Our week on The B begins in Paris and then stops at Conflans Sainte-Honorine (for a visit to Auvers-sur-Oise, the village where Van Gogh’s spent his final months). A night in historic Rouen is followed by a stop in gorgeous Honfleur, on the coast, before turning back to Vernon and La Roche Guyon to see Monet’s gaff in Giverny, then two final nights in Paris.

Just looking at the options for The Seine Experience, we can take a foodie walking tour to the markets in Rouen, go kayaking on the river or try tandem paragliding in the Vexin Natural Park. We might opt to investigate the street art in Paris or see the city from above with a unique rooftops adventure. Trips to the Normandy Beaches, cider farms and Monet’s gardens ensure we don’t have to live life on the edge the whole week.

Activities start a bit later in the day than on traditional cruises as we young things aren’t awfully good early in the morning. Evening activities such as a trip to the Moulin Rouge or an old city bar crawl in Rouen might suit the owls more than the larks. 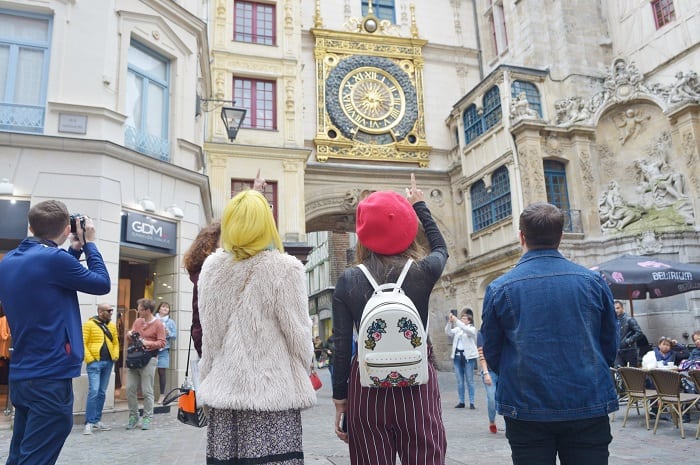 I’m intrigued to discover whether this new river cruise experience will entice the millennials on board. If you’re in your 20s and 30s, would the U by Uniworld concept appeal to you? If you’re my age and older, is this a bit too ‘out there’ – would you prefer to mess about on the river in a more leisurely manner? There’s still availability for this year’s sailings on both The A and The B if you fancy joining the hip and happening U crowd. I’m planning a whole new wardrobe – if I’m representing Generation X I need to do it in style!

All photos courtesy of U by Uniworld. This is a holiday we have booked ourselves so all opinions are my own.