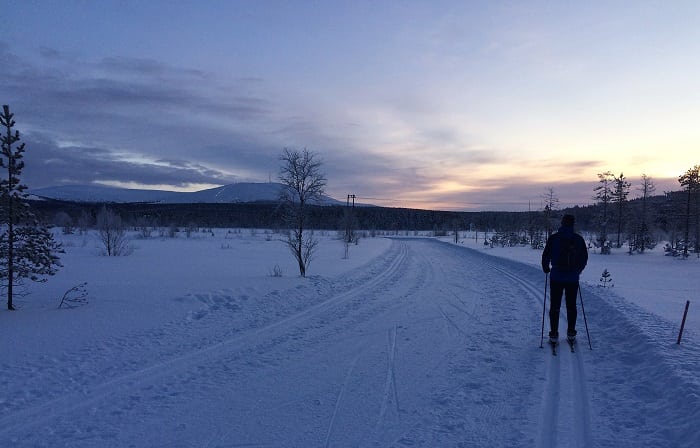 The Winter Olympics begins on 9 February 2018 in Pyeongchang and I, for one, will be rooting for our British competitor, Andrew Musgrave, in the cross-country skiing events. Although he now lives in Norway, Andrew was born in Dorset. He lived in Scotland from the age of 11, learning cross-country skiing at the Huntly Nordic and Outdoor Centre in Aberdeenshire. He is taking on the mighty Norwegians at their own sport in South Korea and actually has a chance of a medal.

Have a look at this inspiring video clip where Andrew explains how cross-country skiing may well be the toughest sport in the Olympics. Which begs the question, what on earth possessed Dougie and I to book ourselves on the Inntravel cross-country skiing try-it-out week last month, in Finland?

What is cross-country skiing?

There are two types of cross-country skiing: classic and skating. Classic involves skiing in prepared parallel grooves on a compacted track; skating is performed on the track with no grooves. We learned how to master classic skiing. Initially you move by just walking or striding out on the skis, but gradually you learn a ‘kick and glide’ technique, which propels you forward more quickly.

There are two sets of grooves for classic skiing and you usually ski on the right hand side. If it’s very quiet and you want to chat to your other half, one of you can ski on the left-hand side until you see someone approaching – handy for taking a quick photo (see below). 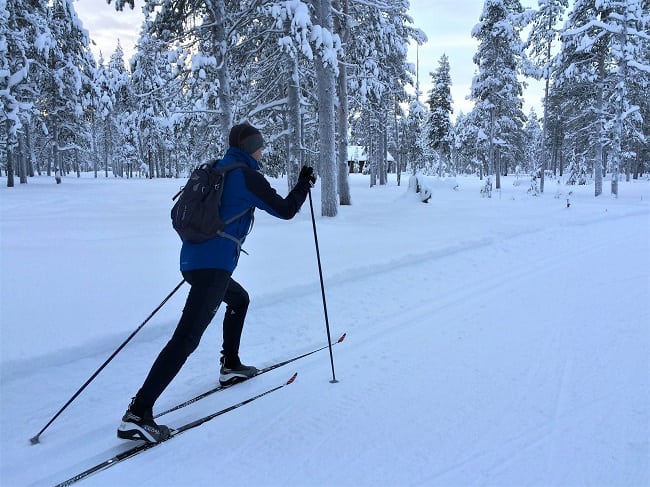 We began our cross-country skiing lessons at our hotel, Ylläshumina, in Lapland. Within our first 90 minute lesson, we had learned the rudiments of the sport and were able to tackle gentle inclines. Although most of the terrain you ski on will be moderately flat, there will be some hills so it’s important to master techniques for dealing with them.

To walk up a hill, you can stay in the groove and take lots of little steps. This, I discovered, takes a lot of muscle power and I’m sorely lacking in that department. I found it easier to use the herringbone method: move out of the tracks and  stomp up the hill with your skis making a V-shape.

To ski down a hill you can remain in the grooves and enjoy the thrill of momentum taking over until you gently glide to a halt as the terrain levels again. If you are unsure, you can take one ski out and use it in a ‘snowplough’ position to brake the speed a little. The third option is to step out of the grooves and snowplough with both skis down the hill, as you would have done as a beginner skier in Alpine/downhill skiing.

What equipment do you need?

If you are learning to cross-country ski, all the equipment will be provided. The skis are much narrower and lighter than normal skis. Traction is gained by having skis with a ‘fish-scale’ texture on the base or by applying special wax, which allows for sliding but grip when weight is applied.

Anyone who has been downhill skiing will agree that the boots  are very large and heavy. Not so for cross-country skiing. Soft, leather, fleece-lined boots are a joy to wear. They only attach to the skis at the toe so are comfortable and flexible, allowing the heel to rise as you propel yourself forward.

Poles are similar to those used in alpine skiing, but longer.

What do you wear?

Even though we were skiing in temperatures of between -9 and -25C, it would have been unwise to wear a traditional alpine ski jacket and salopettes. Cross-country skiing is an excellent form of cardiovascular exercise so you do become warm. I wore a thick ski jacket on one day and was so hot, I was peeling off layers within a few minutes. It’s no wonder Andrew, our Olympic hopeful, strips off to his pants when he’s in training (check out that video ^^^).  We made use of our Alpine outfits when we were out walking instead.

I would recommend thin layers – a base layer (merino wool was excellent for me), a fleece mid-layer and a windproof jacket. Long johns on your legs plus thin, fairly stretchy, windproof trousers. The snow in Lapland was very dry so we never became wet. 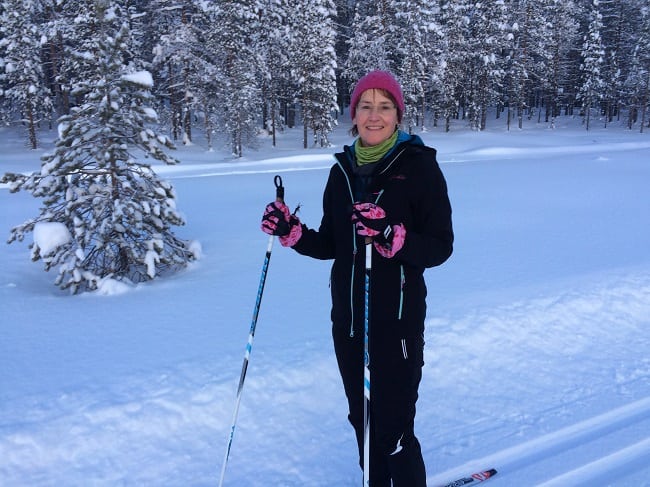 It’s quite hard to source proper cross-country gear in the UK. Decathlon is your best bet or search online for suppliers such as Odlo, where Dougie bought his very fetching, rather tight-fitting trews.

Unlike alpine skiing, no helmets are required for safety: a woolly hat will suffice. Gloves, a buff/scarf, and maybe some sunglasses if it’s bright. We left our ski goggles at home but, in hindsight they might have come in handy –  I kept fogging-up my prescription specs if I breathed into my buff when it was covering my nose. The goggles would have prevented that.

Where can you go to try cross-country skiing?

Ylläs in Finland was ideal for a beginner – lots of easy blue trails around Lake Äkäslompolo. Inntravel provide try-it-out weeks here for guests to learn alongside others. There are similar weeks arranged at resorts in Norway, Austria and Switzerland.

I’ve written an article for Inntravel about what’s involved in a cross-country try-it-out week. Using Bridget Jones for inspiration, here’s my daily diary of skiing exploits.

What did we enjoy about cross-country skiing? 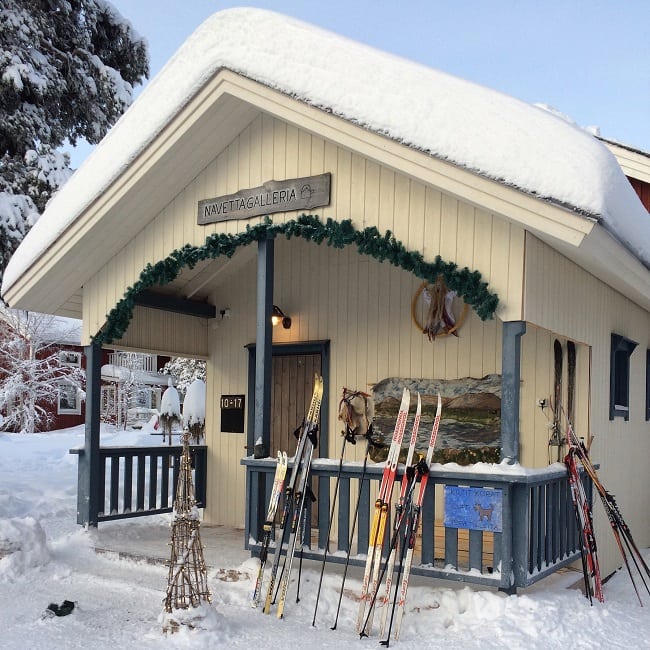 Would we do it again?

Yes, absolutely!  We’ve got all the gear now, so it would be a shame to waste it. Cross-country skiing is a fantastic way to enjoy a winter holiday if you don’t fancy downhill skiing. We’re keen to explore the trails elsewhere in Europe or return to the magical Ylläs fells in the future. 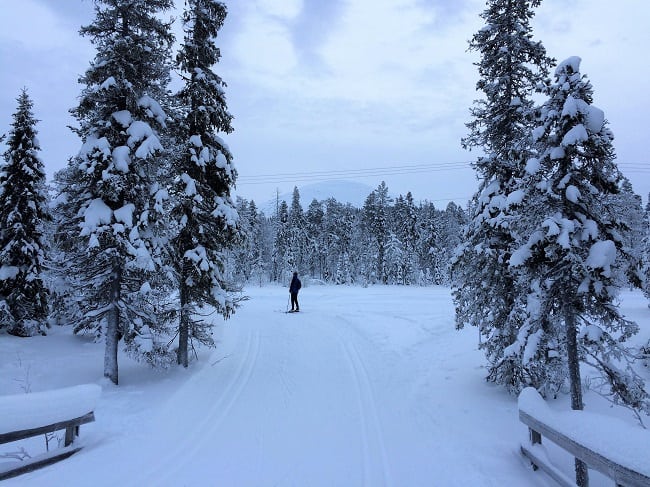 We booked our own Cross-country skiing ‘Try it Out Week’ with Inntravel. We did receive a small discount in exchange for an article I wrote for their website.