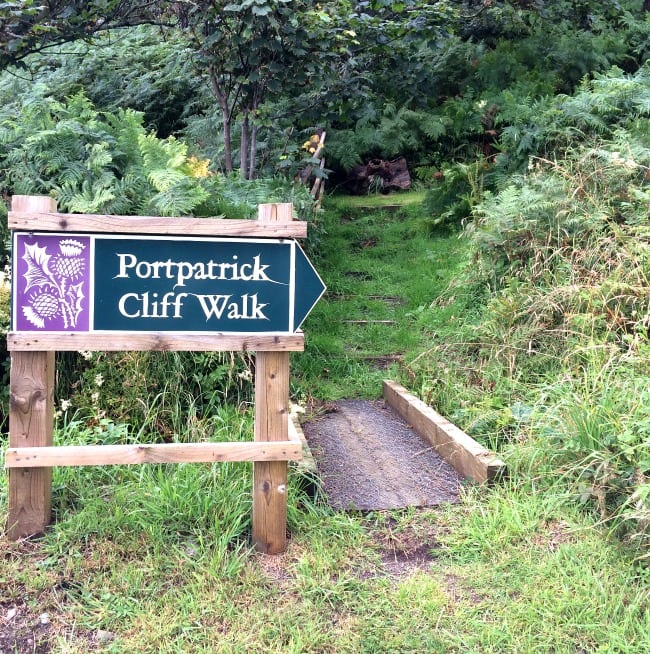 “It’s a moderate walk and should take us an hour and a half,” Dougie announced to me, as I was happily scoffing toast and lounging about in our gorgeous holiday home, Shingle Lodge. I thought long and hard about this suggestion then realised it was a great opportunity to test out my new Tough Mudder shoes. This would be their first outing and what better than to tackle a coastal walk along the clifftops here in Dumfries & Galloway.

Armed with a map and written directions from the hotel, we set off on our walk from Knockinaam Lodge to the fishing village of Portpatrick. The first part of the trek was going to be the most strenuous. They weren’t kidding. The path began just behind our accommodation, but the steep ascent up to the relative plateau of the clifftop was a killer. I was tempted to just have a look at the view of the hotel and the Port of Spittal Bay then clamber back down but the boys insisted we should continue. 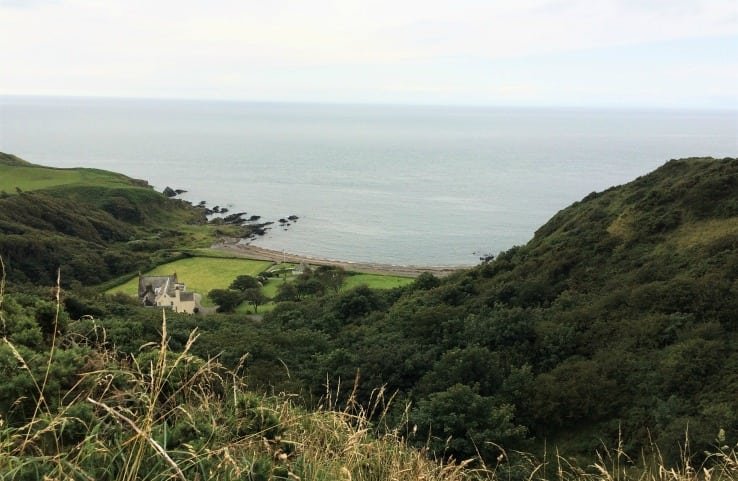 Rory was remarkably agile and strode on ahead with ease. This flummoxed me as his default position at home is horizontal on the bed or sofa. Had all those teenage years of indolence actually been an ingenious method of storing up energy reserves, to be unleashed on the rugged Galloway coastline?

As our mountain goat led the way through numerous styles and kissing gates, we fought bravely with gorse and bracken and Dougie wished he’d brought a machete with him, or at the very least, a kitchen knife, as the plants reached head height on the Craigoch Park Moor. At one point, as you’ll see in the image below, Dougie opted to be lead scout and it did make me laugh to see Bear Grylls, rucksack on his back, attacking the undergrowth with gusto whilst his son, Bear Grylls Junior, wearing totally inappropriate denim jacket and black jeans, sauntered behind, browsing nonchalantly through his phone. 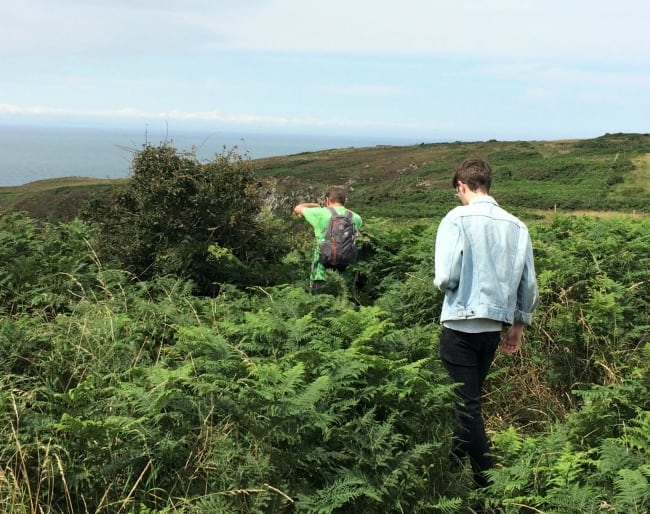 The views across the sea to Northern Ireland were spectacular, and we managed a few uneasy glimpses down to the rocks below at Tandoo Point and Ratten Hole. We crossed a pretty footbridge across a fast-flowing stream, the Craigoch Burn, and just stood there for some time, basking in the sunshine and drinking in the beauty of the landscape. 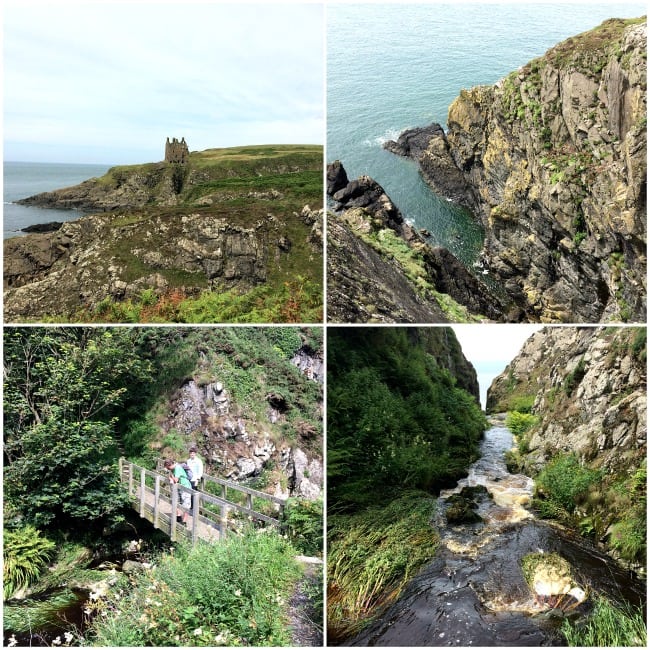 Just as the ninety minute mark was up, we skirted round the ruins of Dunskey Castle and negotiated a number of steps down towards the delightful curved harbour of Portpatrick, looking so inviting in the midday sun. 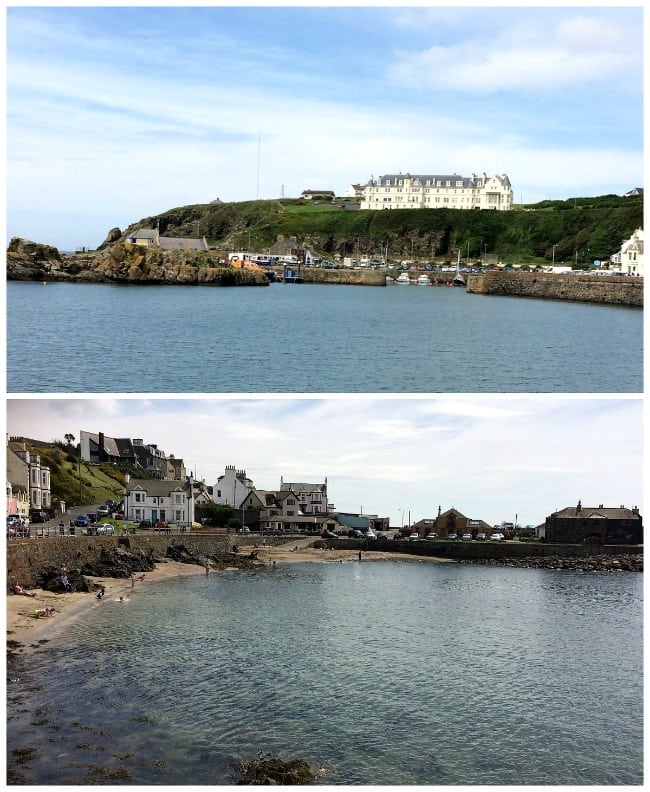 Understandably euphoric after our journey, we made a beeline for the Crown Hotel. I placed my fingers around a very welcome glass of lager then tipped the whole lot into my lap. A few dabs with a thin napkin proved futile so I had to take myself off to the ladies’ loos and pray they had something more effective at drying my nether regions. I whisked my trousers off and wafted them under the hand dryer which was, mercifully, the most powerful machine I’d ever come across in a pub. Its strong air current, coupled with the moisture-wicking capabilities of my performance pants, made light work of the job.

I returned to our table, stain-free, with only the pervading whiff of old beer mat that surrounded me giving any hint of my embarrassing accident.

“There’s no time for another drink now,” said Dougie, as he and Rory licked their lips and made a move to go. “We’ve got to walk all the way back.”

“What!” I wailed. “Doesn’t Portpatrick have any taxis?…Uber?”

“What about if we get a bag of chips first?” 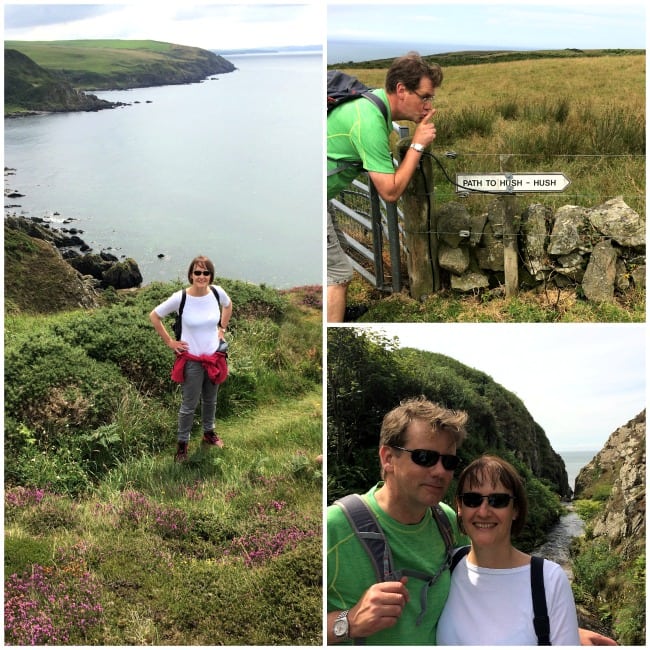