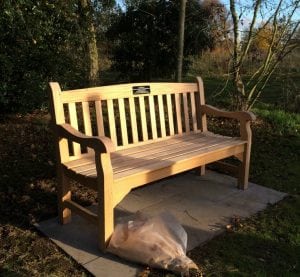 There is a smart new bench situated at the Shot at Dawn memorial in the National Memorial Arboretum. It is dedicated to “John Hipkin 1926-2016. Leader of the campaign to bring pardons to those soldiers before you, proudly achieved 16/08/2006.”

The memorial is one of over 300 in the UK’s centre for remembrance near Litchfield, Staffordshire. The name on the bench belongs to my uncle who led the campaign to pardon 306 British soldiers who were executed by their own superiors for cowardice or desertion during the First World War.

When official records were released in 1990 my uncle John, a retired teacher from Newcastle upon Tyne, decided to take up the fight for these soldiers who were either underage, suffering mental illness or where there was doubtful or illegal Courts Martial. Some of the harrowing records included Private Thomas Highgate (aged 17) who fled from the Battle of Mons and hid in a barn. He was undefended at his trial because his comrades from the Royal West Kents had been killed, injured or captured. Private Herbert Burden (16) lied about his age to join the Northumberland Fusiliers. Ten months later he was executed for fleeing after seeing his friends die at the Battle of Bellewaarde Ridge.

The stories of these young boys were of particular interest to my uncle because of his own experience during World War II. Aged 14 he joined the Merchant Navy only for his ship to be captured by the German battleship, Scharnhorst. He became Britain’s youngest Prisoner of War and was eventually released at the age of 19 at the end of the war. It’s little wonder he found an affinity with the young, frightened soldiers of earlier conflicts.

John, along with relatives of some of the executed men, urged successive governments to pardon these men. He wanted them to recognise that the soldiers  had been suffering from shell shock or had been given little or no legal support before being condemned to death at the hands of their fellow soldiers who had to pull the trigger. Despite a number of setbacks my uncle persevered; an elderly man silently holding a placard at remembrance ceremonies across the country, occasionally being arrested for doing so.

In 1999 a documentary, ‘Conviction’, was broadcast on the BBC’s Everyman programme. Its focus was the tireless efforts of my uncle and the Shot at Dawn campaign. Watching the programme was a sculptor, Andy DeComyn, who was so inspired by the documentary that he made enquiries of the BBC and offered John his help. The following year he created a memorial for the forgotten men of World War I and in 2001 his sculpture was unveiled at the National Memorial Arboretum. The slight figure of a blindfolded boy was modelled on Private Burden. With his hands tied behind his back he stands in front of 306 posts, bearing the names of the executed men. Six fir trees are planted opposite, representing the firing squad. 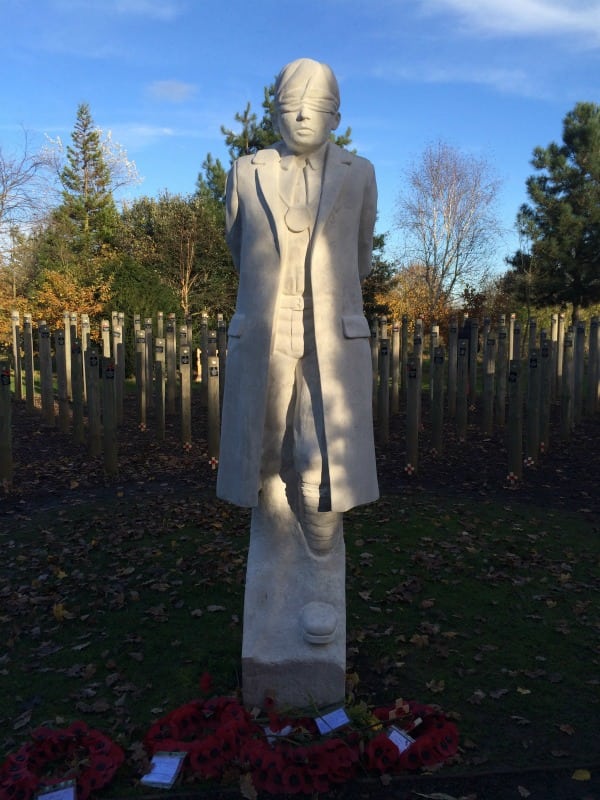 Andy DeComyn funded the statue himself, with donations covering the cost of the posts and landscaping. The memorial generated a great deal of media interest and was instrumental in paving the way for the government to eventually grant pardons in 2006.

In November I visited the National Memorial Arboretum and was overwhelmed by the emotion which is triggered when seeing so many extraordinary tributes to those who have lost their lives. One of the highlights is the Armed Forces Memorial which has just undergone a year’s renovation. It’s a magnificent monument, listing the names of all Service personnel killed in operations since World War II. What is striking about the design is that at 11 am on the 11th November, the sun shines through the slim gap between two walls. 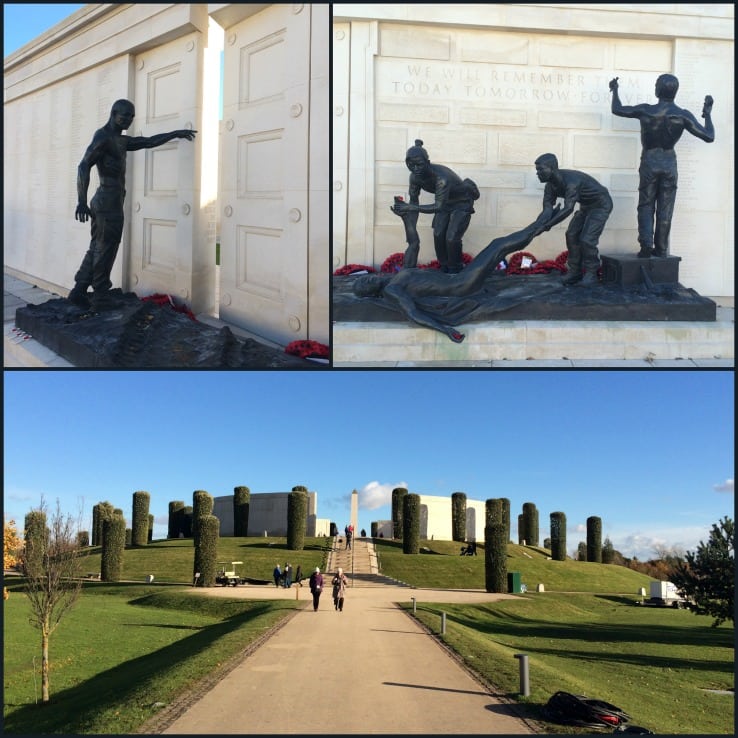 There are so many moving testaments to groups such as the Showmen’s Guild and those killed on the Burma Railway. Land Army girls are represented, so too are the Salvation Army and the Women’s Institute. The arboretum, with over 150 acres of beautifully kept gardens, meadows and woodland, is quite beautiful and I can’t praise it enough. It is free to enter, though donations are gratefully received. It has a beautiful chapel and a brand new state-of-the-art visitors centre with an excellent café/restaurant. A whole day spent here is highly recommended. 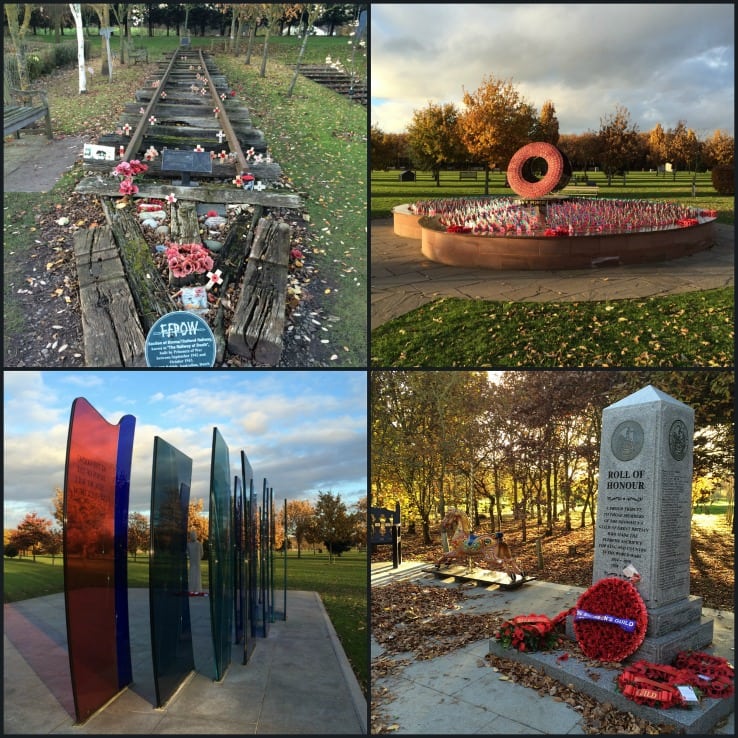 Of course, the Shot at Dawn memorial was the focus of my visit and, having attended my uncle’s funeral in July, after he died at the age of 90, I wanted to see the bench which had been dedicated to him.

On the plaque are the following words: 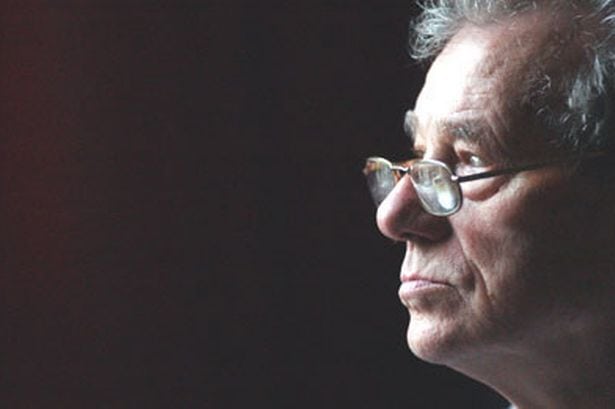 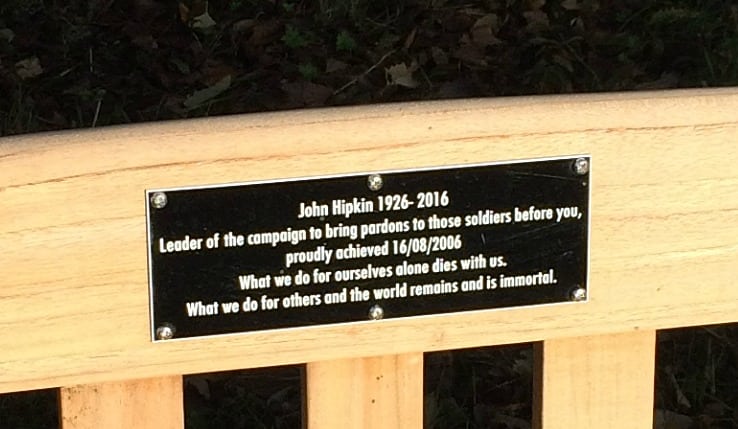