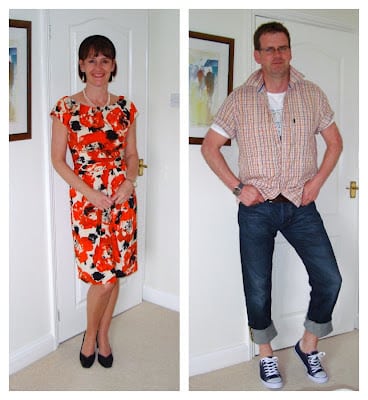 The invitation said to dress in 1950s style. I’m not convinced my dress was that authentic: sort of tulip-shape, cap-sleeves, slightly empire line. Could have been anywhere between the 40s to the 60s and most probably just 2011 as I bought it in the sales last year. Couldn’t get my hair to curl either. But hey, pop on a string of pearls, shove a head band on and I don’t think this was too bad an effort for a Jubilee party. Dougie, refusing to go along with my sophisticated look: “I wear a suit every day, I’m not wearing one for a party”, decided to go ‘Rockabilly’. He tried on a few combinations and seemed unable to roll his trousers up without dancing and singing in front of the mirror. Rory was invited too and his normal outfit of choice – jeans, check shirt and cardigan – seemed to hit the 50s groove rather well.

When we arrived we noticed there were quite a few Elvises in some very bad wigs: very hard to work out who was who as our bald friends were unrecognisable. We had a large gang of Pink Ladies, a la Grease, and even a leather-clad, curly-blonde-wigged Olivia Newton John. Lots of the ladies went to town with gorgeous big sticky-out frocks. Quite difficult to move in my friend’s galley kitchen with the amount of tulle blocking the way. 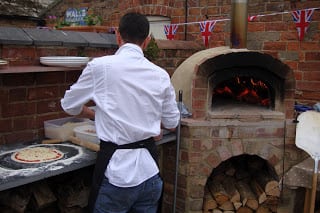 We had a fabulous time. The trestle tables groaned under the weight of cheesecakes decorated with strawberries and blueberries in Union Jack pattern, the beer was in a huge American style old fridge which was plugged in on the patio and the barbecue was laden with massive steaks and burgers. But food heaven came in the form of pizzas, made on the premises in our friends’ newly built brick oven. Another pal owns a pizza restaurant so he had a busman’s holiday and made the most delicious, light-as-a-feather pizzas all evening.

And the weather? It stayed dry all evening. It was cold later on, though, and the little shruggy cardi I’d brought did very little to help. So I borrowed a fleece from the pizza man and stood with my backside in front of his warming oven.

So beginneth the Jubilee weekend….