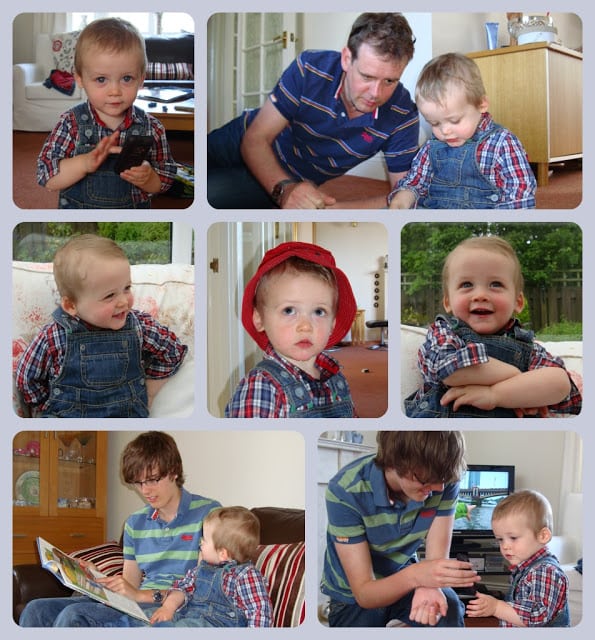 After our night at the 1950s party last Saturday evening, we headed off to Newcastle early-ish Sunday morning to spend some time with Mum and the rest of the family. The little fella in the montage above is my nephew, Johnny, 17 months old now and such an adorable little boy. As you can see, he enjoys reading with Uncle Dougie and Cousin Rory and, it would seem from the photo bottom right, the big cousin is giving him valuable lessons on how to use a mobile phone.
We had a tea party on Sunday afternoon, drinking Pimms and watching the Jubilee Pageant on the River Thames. I say ‘watching the pageant’ but Mum was getting sick of it by the finish and was becoming most unpatriotic. We had to laugh when she was moaning that this wasn’t meant to be a bloody Jubilee party anyway and someone countered with, “Well you were the one who made coronation chicken!”
The weather wasn’t bad at all up North so managed to get Johnny out in the garden, where I shot a little video of him with his watering can. It’s very cute, especially when he smells the flowers. When I watch this video back I’m at a loss to explain how, after 30 years living away from Newcastle, I still sound exactly like my mother…