Home  >  Blog  >  Guest Post: Our romantic trip to Belgium
Dougie and I haven’t disappeared to Belgium this week but my niece, Jessica, has just returned, having had a short break there with her boyfriend, James. I asked her if she would like to write about their visit for my blog and she agreed. Here, with photos, is Jessica’s review. I’m very tempted to book a trip there for myself.
Our romantic trip to Belgium
Jessica Grinsell and James Procter
We decided
to go to Belgium for our two year anniversary. Why Belgium? Because Ryanair had
tickets at only £35 pp return – bargain! We were convinced to book it because
of the two things everyone said about Belgium – fantastic
chocolate and fantastic beer!
Our first
port of call was Brussels – which we loved. You literally stepped out the main
entrance of the hotel and you were in a fabulous square with lots of bars and
restaurants and a daily market. However as soon as we discovered the chocolate
shops that was it – we were in our element. There were dozens of wonderful
little chocolate shops, each selling unique products. We struck lucky finding a
lovely shop which seemed much cheaper than the others, and the chocolate was
exquisite. And they had samples – bonus. I would highly recommend it.
We headed to
the Grand Place that evening for somewhere to eat, and were surprised by how
much it felt like we were in Spain with the bustling streets where vendors were
trying to convince us to eat at their restaurant “Madame your smile is so
wonderful, I shall give you our best table”. So we decided to walk out of
the area, and found an Italian Bistro in a little side street. Unfortunately it
was disappointing. Next time we would research a good restaurant. Back in the
hotel we finished eating our chocolate and had some beer in our 24 hour bar – a
perfect end to a busy evening trailing around the city.
The next
morning we discovered Brussels properly; we had arrived late on the Friday and
it was consequently hard to explore fully in the dark. We found a great little coffee shop which did perfect hot chocolate, went to a pub, which in
English is called ‘Sudden Death’, where we had a few beers, and then wandered
around looking at the beautiful architecture – which my Grandad would have
loved – and bought more chocolate in my new favourite shop.
Our next stop was Bruges which we reached later that day. We were relieved when it was as beautiful as
we hoped it would be. The train had passed through lots of run down areas; we
were amazed by the amount of graffiti everywhere – very Banksy. But fortunately
Bruges is as quaint and picture perfect as past visitors had said it was. Again
my Grandad would have adored it – Grandma has told me how he visited Belgium
when he was a young man, which made our trip even more special. 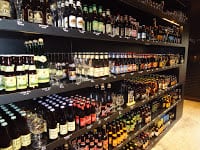 Our hotel
looked onto a stunning canal and bridge, and was only two minutes away from
everything. The weather made this location even better; it was belting it down
with rain so we could still explore without having to go too far and getting
drenched. The weather cleared the next day which meant that we could properly
wander around the city – seeing parts outside the normal tourist areas as well.
We also found, you’ve guessed it, a fantastic chocolate shop, a fantastic
coffee shop which sold fantastic hot chocolate and many fantastic beer shops.
Literally on our doorstep was a bar and shop, which sold over 2000 beers each
presented in their own glasses. My boyfriend, James, was overwhelmed by the
amount of beers and we regretted not booking extra luggage for our flight home.
On the Saturday
evening we had a stunning meal. As we had booked in advance, i.e. we popped in
around 5pm to see if we could get a table for later, we were given an excellent table and service from the top waiter despite the fact that we were not seated
in his part of the restaurant. Situated by a lovely fire we had a beautiful
dinner and it fulfilled the romantic vibe that we were expecting from Bruges. By Sunday night however we had run out of money and had to eat chips from a
takeaway for dinner! Not so romantic …
Would we
recommend Belgium? Definitely. Why? Hazard a guess – Fantastic chocolate and
fantastic beer!