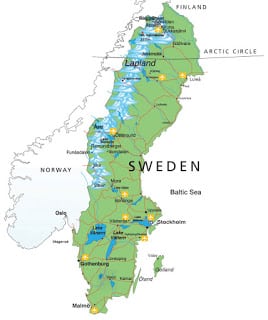 It’s all sorted. After many weeks of research, following my original post, ‘Mum’s planning to go to Sweden’, transport and hotel accommodation have now been booked.

This is the first time we have planned a fly-drive ourselves. With Iceland and Canada we booked a package which is much easier but certainly not as exciting and liberating as this exercise has been. When I say ‘we have planned’ I have to say it was mostly me. Dougie happily allowed me to do all the nitty gritty although I did show him pictures now and again to keep him in the loop.

Armed with his credit card I had a lovely time. I also thoroughly enjoyed booking the accommodation via the hotels themselves. As we wanted to make sure we had either interconnecting rooms or, at the very least, rooms next door to each other, I found I was making contact, via email, with some fabulous reservation departments in Sweden. I feel I’ve made friends with Oliver, Katarina, Amanda, Elisabeth and Hanna; so efficient yet with a relaxed, personal touch.

So where are we going? Thanks to lots of advice on my previous post and from friends on Facebook, plus many discussions at home about what we really wanted to experience in Sweden, we have come up with an itinerary which should have the right balance between city and countryside, sightseeing and relaxation.

We are flying to Stockholm’s Vasteras Airport which isn’t anywhere near Stockholm but the Ryanair flight was convenient and cheap and there is a bus link to the city centre. Have decided to stay four nights in Stockholm as there is so much we want to see there. On the fifth day we pick up a hire car and head West, staying for two nights on the shores of Lake Vattern and two nights at the southern tip of Lake Vanern.

We dithered for some time with regard to fitting in Gothenburg. At one stage it was a definite yes and then we had trouble finding rooms in the hotels we liked. The only explanation I could come up with was that Bruce Springsteen is in concert in Gothenburg that weekend. Surely that can’t be the reason? Of course I then wondered if we should try and obtain tickets to see him (well, we did see Rod Stewart in Montreal) but changed my mind. In the end we realised we would be better going to Gothenburg another time and linking it with a trip north from there to see the archipelago.

So, avoiding Stockholm’s second biggest city altogether, and most likely the usual marital tiff as we try to find  hotels and negotiate car parks in town centres, we scoot down the coast and spend two nights by the beach in Angelholm. This should give us time to visit Bastad and Helsingborg if we feel the urge but also the opportunity to just chill out on the sand.

Our final stop is Ystad, home of Swedish TV detective Wallender, where we have four nights, again by the beach. We are ideally placed there to see more of the Skane area and can visit Malmo too. Our hotel is only half an hour from Malmo Airport so we can fly back to Stansted from there.

What do you think? It doesn’t include all of what we wanted to see but with a mixture of city, lake and beach environments I think I’ve got the balance about right for us.