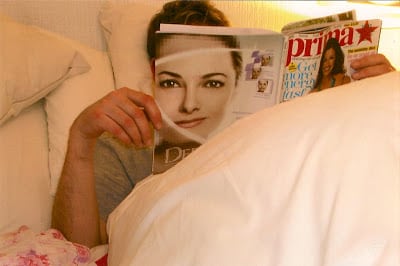 ﻿
It’s not often you have your camera primed and ready when an unexpected photo opportunity comes along. A few years ago I was lucky. We were staying at my parents for the weekend and I was fiddling about with the camera, deleting old shots, when I looked up and saw my husband transformed into a beautiful woman. I can’t believe he was holding the magazine so that his hairline seamlessly matched that of the model. It was rather creepy but I thankfully avoided yelping in order to catch him before he moved.
I thought the shot was perfect for The Gallery this week, the theme of which is ‘chilled out’. A man having a lie-in reading his mother-in-law’s Prima magazine seems pretty chilled to me.