After the odd sleeping arrangements of the previous night (see last post ) we were grateful to be back together again for breakfast. The number of families with small children in the dining room gave us some indication of why our request for connecting rooms seemed to have been forgotten. Thankfully after a gorgeous buffet of Danish pastries, Danish bacon and probably Danish smoothies we were pleased to discover Rory’s new room, nearly opposite ours, had been prepared. It was bigger than the previous one and although it wasn’t connected to ours, I could see that they had done their best to put things right.

Emma, my new blogging buddy in Denmark, had suggested a cycle tour as probably the most fun way to explore the city. She obviously doesn’t know my family that well so, after I’d explained that I couldn’t see cycling on proper roads equating to fun with my lot, we opted for her second suggestion of a canal tour. Well done that woman. This was a fantastic way to see all the best bits of the city and not get stroppy with each other once the tiredness set in. We were able to hop on and off at certain points to see the following:

﻿Copenhagen’s new Opera House. The impressive Skuespilhuset theatre, on the opposite bank, echoed the architecture of this magnificent building. 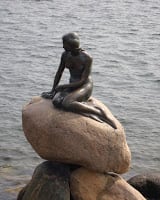 The Little Mermaid (Den Lille Havfrue). She had just returned from a jaunt to China where she had been in an exhibition for a few months. I think I’d have been rather disappointed if we’d come to visit her in Copenhagen, only for her to have been replaced by a video screen. The guide told us she had heard from a Chinese man that the queue to see the statue in Shanghai was over 8 hours long. I can see why he decided to hop on a plane for Denmark instead.

After we’d climbed the 400 steps to the top of Our Saviour’s Church (no mean feat in itself) we took a peek inside as I’d been told I could see a huge organ on two elephants. Indeed, I could.
We returned to Nyhavn where the sun had beckoned all the workers to the pavement bars and cafes for their lunch. This is where we observed hygge, the Danish expression which explains their attitude and lifestyle. Meaning ‘cosiness’ it conveys the laid-back attitude, their love of life and yet their acceptance of rules, order and a realisation that the sun might not be out for long! Everyone had their face turned upwards to catch the rays yet many cafes had throws or blankets neatly folded over the backs of the chairs – some colour co-ordinated with the tablecloths.
A walk down Stroget, the main shopping street, followed, starting with Upper Stroget and the stylish boutiques of Gucci and Louis Vuitton, and ending in Lower Stroget with Macdonalds and Foot Locker. Isn’t that the same all over! Away from this main street, the boulevards were wide, spacious and very attractive: the buildings a similar height with a symmetry to the shape and number of windows. Nothing looked out of place and even the modern architecture didn’t upset the balance.
Evening is probably the best time to visit one of Europe’s oldest amusement parks, Tivoli Gardens. It’s rather small but very pretty and sparkly, enjoyed by all ages. The boys had done their homework on where to eat and had plumped for a steakhouse, Hereford Beefstouw. It wasn’t cheap but in our opinion the steaks were thick, juicy and tasted fabulous. We were seated at stripped wooden tables and given a little ticket and a pencil. A quick look at the menu before ticking which steak, how we wanted it cooked and whether we wanted potatoes or chips. Pop your initials and table number on the card then hand it to the waiter. I loved that. My steak arrived and I was so excited that I forgot I wasn’t “RB” and happily accepted Rory’s plate. Dougie shook his head and, unable to hold the cast iron plates, swapped the steaks over with two forks, setting fire to his arm hair on the candle in the process.

We weren’t up to going on the rides after that, which was just as well as Dougie and I have an innate hatred/fear of most of them and Rory would happily go on them but apparently not with us as we’re embarrassing. We spent some time just absorbing the happy atmosphere before I wandered off to a stage where an orchestra was playing pop classics. The boys weren’t keen so I left them to sulk on a bench. As Riverdance was being played I ambled back to the menfolk and, as they came into view, I treated them to a little Irish jig. They fell about laughing which I thought a touch harsh until Dougie explained that two seconds earlier he had warned Rory, “I bet you anything your mother will come back doing a Michael Flately”.
As Day Two came to a close, we happened on this video screen showing previews of films for the festival. Not sure this one would be top of my list: 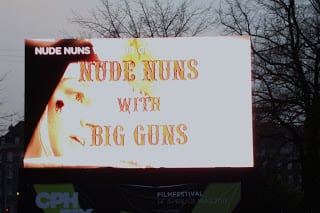