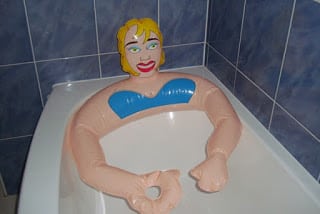 Before Christmas Dougie complained he was uncomfortable in the bath and that it would be nice to have a bath pillow. So I bought him Soapy Sophie, an Inflatable Bath Buddy. Isn’t she marvellous. In the description it said Sophie could hold your beer while you soak. I thought this sounded an excellent idea until Dougie blew her up and we looked at the result….

Soapy Sophie joined us for Christmas Day, along with Dougie’s parents, George and Emily. The inlaws are notorious for bizarre presents. Their only son asked for some ankle weights one year; on Christmas day they arrived with a small parcel, explaining that they couldn’t find the weights he was after so bought him some sport socks instead. Unfortunately they were white knee-length football socks….Chelsea socks, in fact, as the name was embroidered into them half-way up the shin. Great for a Hibernian supporter who doesn’t play football.

This year we gave them some suggestions as to what we might like and hoped it wouldn’t tax them too greatly. I was lucky and received some lovely Emma Bridgewater mugs but their poor son was given socks again, and a box of white hankies with a D embroidered on them…

Some of you will doubtless remember the annual round of charades which has become traditional after our Christmas Day meal. This is now fondly referred to as ‘Arthritic Charades’ on account of George’s inability to make it clear with his poor old fingers how many fingers he is holding up. We often shout “Three and a half!” and roll about laughing.

This year he was great value once again. Examining the card for some considerable time, he was about to start but then needed another look. We were on tenterhooks. A five-word song. He made a  T shape with his hands so we shouted out ‘the’, ‘they’, ‘them’, ‘this’ and all the variations we could think of until he told us it was ‘to’. On one word he held up six (ish) fingers so we shouted “six” and “sixth” but were getting nowhere until he explained he was showing us the number of letters in the word. No mime, nothing, just letters. “Bloody Hell, George, we’re not playing Hangman”, I said wearily.

We introduced him to the idea of syllables after he’d shouted “elbow” during one of my actions. He liked this and tried it on his own turn. Third word, two syllables. Then he just stood there, looked at us eagerly and eventually said, “Come on then, have a guess?”.
“Try giving us a bloody clue, Dad”, Dougie implored, head in hands.

It went downhill from here: I was given the film “Shaft” and got a little carried away then George was given “The Naked Civil Servant”. Thank God we guessed it before it all became rather unseemly.

Anyone for a mince pie?