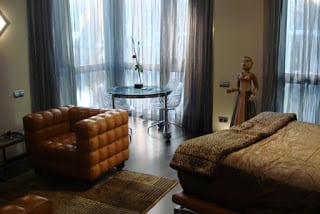 Have just returned from a frankly exhausting few nights spent in the most sensual, hedonistic hotel I’ve ever had the pleasure to stay in.

Sometimes minimalist hotels can lack a bit of warmth. Not so the Hotel Urban in Madrid which, though funky and chic, oozed sex from every piece of wood, slate, marble and leather. We pushed the boat out booking a suite and deposited Rory in the interconnecting standard room next door.  What an excellent decision!

Taffeta bed cover, fur throw, peacock feathers, lots of electrical wizardry to dim the lights and close the blinds; even the complimentary slippers were black. We also had some company in the form of an unusual statue (see right) which seemed to offer a rather enlightened alternative to the usual room service menu….or was it just somewhere to leave your brolly? Just watch for the splinters.

These artefacts were dotted about all over the hotel: the totems in the reception lobby were particularly well-endowed and made me laugh and point as I can’t seem to be sensible and grown-up about willies in art and sculpture generally – such a philistine.

I was just as silly in our bathroom which had glass walls so could be seen from the bedroom. Thankfully there were blinds available and the loo was in a separate, private room. The walls of the bathroom were black slate and marble, there were mirrors everywhere and the huge jacuzzi bath was positioned in a large picture window. I could sit in the bath, with the bubbles putting a smile on my face, and wave to the people looking around the Habitat shop next door. I found the blinds for that window a day later….

Whilst Rory watched Spanish Countdown and MTV in his own little pad, we got into romantic mood with a litre carton of Sangria from the supermarket (no corkscrew to hand and no bottles with screw-tops to purchase). Class. Thankfully the pre-dinner gin and tonic in the hotel’s Glass Bar was huge and terribly sophisticated. Bloody marvellous!

I will be telling you all about the sights of Madrid in another post. Amazingly we did venture out …needed a bit of air from time to time.